Obama Gets Casual, But Hillary Gets Down 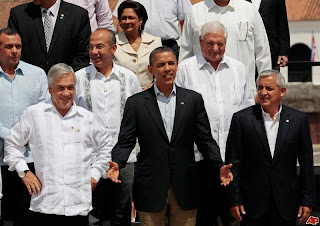 As I suspected he would, President Obama refused to wear the 'Silly Shirt' in the official group photo at the close of the Summit of the Americas today. He wasn't the only one; from the wide-angle photo below, it looks like compliance was only 50 percent. Some of the stiffs even wore suits and ties! Obama struck a safe middle ground by going Casual Friday in khakis and a blazer.

The photo gives a sartorial signal of the political discord on which the conference ended. There wasn't even a final joint declaration, since the delegates couldn't agree on matters from Cuba to the Falkland Islands.

“There is no declaration because there is no consensus,” in the words of Colombian President Juan Manuel Santos at the summit’s closing news conference.

Well, that summit conference was a lot of trouble for nothing.

While Obama stayed buttoned-up, SecState Hillary Clinton was in a partying mood, going to a Cartagena bar on Saturday night to dance and chug cerveza from the bottle. 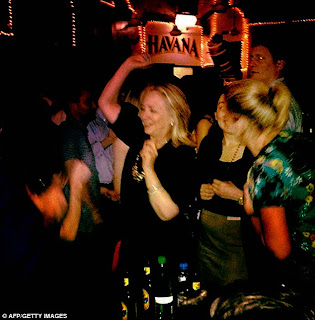 According to a report in the British press, Hillary "ditched her trademark scrunchie and let her hair loose, opting for a more laid back look ... Mrs Clinton, who is normally a fan of two-piece suits, was pictured in a casual black dress, which she teamed with chunky jewellery."

There are more photos of party-hearty Hillary here.
Posted by TSB at 2:50 PM