Workers of the World, U.S. Embassy Moscow Is Hiring 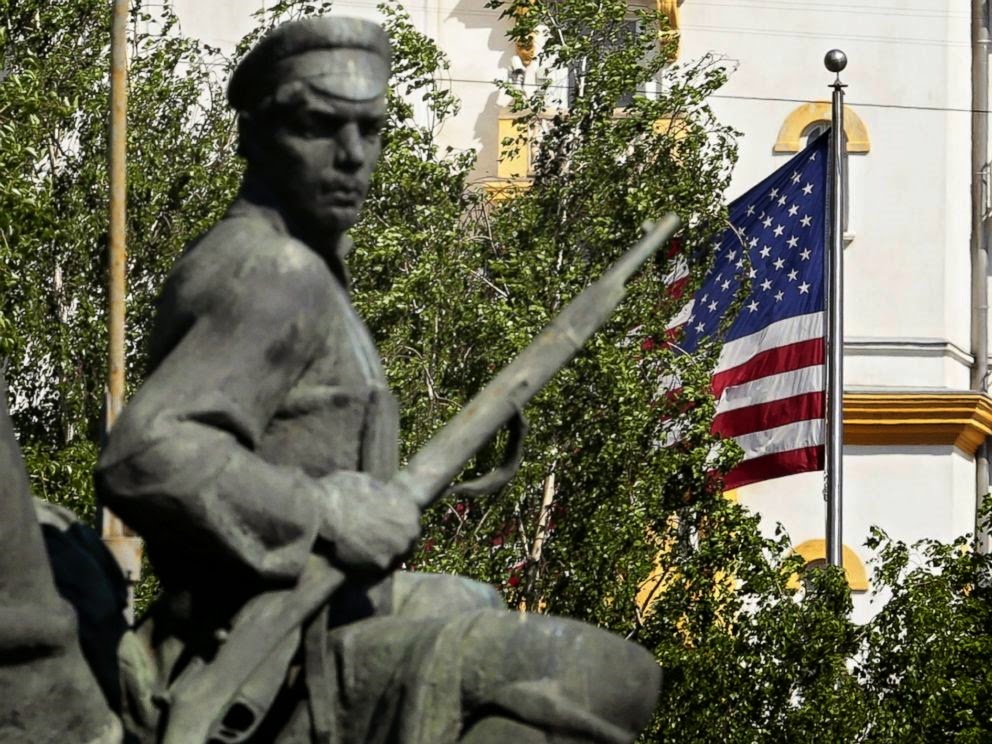 We'll see what comes of this if and when it becomes law, but a bill has been introduced that would require the U.S. Embassy in Moscow to replace most of its locally engaged staff - i.e., Russians - with U.S. citizens.


Requires the Secretary of State to ensure that every supervisory position at a U.S. diplomatic facility in the Russian Federation is occupied by a U.S. citizen who has passed, and is subject to, a thorough background check. Directs the Secretary to submit to Congress a plan to further reduce the reliance on locally employed staff in such facilities.


The U.S. Embassy in Moscow, just like all other embassies, employs local people to do all kinds of labor and non-sensitive administrative work. That practice has some obvious security implications, but, do we really need to replace the locals with American citizens? Americans cost a great deal more than locals, especially since you need to provide their housing and pay for their travel and support. Is the gain in security worth the extra cost? In fact, is there actually a gain in security?

Experience says there is not. We replaced the local employees of U.S. Embassy Moscow with Americans once before, back in that great Cold War year of 1985, AKA, the Year of the Spy. How did that work out for us?


According to Senator Patrick J. Leahy, a Vermont Democrat who as vice chairman of the Senate Select Commitee on Intelligence has been briefed on the problem, the report says so many Russians, including known intelligence agents, are employed at the American Embassy in Moscow that the embassy ''is a sieve.''

The State Department has resisted replacing the Soviet employees because of the cost of hiring, training and housing hundreds of Americans for menial jobs in Moscow and other Soviet-bloc capitals. In addition, a State Department official said, ''these are the people who actually live in the society and can get things done for us.''


The State Department resisted until it lost the political battle in Washington. As the then-Undersecretary for Management, Ronald Spiers, noted in his 1991 oral history interview with the Library of Congress:


Secretary George "Shultz, who had originally supported [Ambassador to Moscow] Hartman, finally came to the conclusion that the political heat was too great and that the substitutions had to be made."

And so it was out with the old Russian staff, in with the new 100 Percent American staff. That is, after an interval of a few months in which diplomats made due without any help:


Running an embassy or consulate without [local employees] was a lot of hard work, particularly in the Soviet Union’s "deficit economy", where basic necessities like food plus hygiene, medical, and office supplies all had to be imported. The U.S. press focused on the poor, poor American diplomats who, boo-hoo, suddenly had to clean their own homes and offices. That wasn’t the half of it. All travel arrangements now had to be made by language-qualified officers, and the rule of thumb was that it took one day of preparation before and one day of paperwork after travel for each day on the road.

As springtime approached, ice began to thaw and the U.S. Government responded to our needs, finally. DoD was the first, sending a half-dozen Army drivers to chauffeur the Ambassador and drive our trucks (until then, first Ambassador Hartman and later Ambassador Matlock had been driving themselves in an armored Opel sedan). The omnibus contract was let and the first PAE [Pacific Architects and Engineers] contractors appeared in April. Heat was restored to the chancery and new telecommunications equipment was installed.


Having American citizens do the embassy's driving and laundry and maintenance and repair work cost much more than employing locals, but at least it eliminated those security vulnerabilities that had so bothered Senator Leahy, right?

No, not according to a followup story in the New York Times from April, 1987, Old Moscow Hands Irked On Embassy:


The use of Russians inside the compound had been criticized by officials in the Administration and in Congress as a potential breach of security. Among those who reportedly had argued for ridding the mission of Russians was Jack F. Matlock Jr., then President Reagan's special assistant for Soviet and European affairs and now Ambassador to Moscow.

Mr. Hartman and officials in the State Department had defended the practice on the grounds that the Russians provided valuable and inexpensive service and that they were an identifiable and therefore manageable security risk.

Critics of the [old] embassy employment policy now cite the seduction of a Marine guard by a Soviet employee, who then reportedly used the tryst to infiltrate agents into the building … On the contrary, the officials said, the incident supported their contention that American workers brought in to replace Soviet employees could prove a greater risk because they would be untrained and unprepared for the pressures of duty in Moscow. Nine of the contract workers brought in to replace Russians, they noted, have already been sent home for unspecified security violations.


So, the American service workers with low level security clearances whom we hired after 1985 were no more disciplined and security-conscious than the Marine Security Guards who had earlier gotten themselves into such trouble over Russian women? I'm putting on my surprised look. Really, couldn't Senator Leahy have seen that coming?

We gave up on the All American employment policy in 1993, and the embassy hired local Russians once again, as it has done to the present day.

Ambassador Arthur Hartman retired soon after the Moscow embassy flap of 1985. He was interviewed for the Library of Congress oral history project in 1989, and explained why security vulnerabilities did not disappear when we hired Americans to do service jobs:


I have disputed [that there are security benefits to using U.S. citizens in place of local employees] in the past saying that going to zero Soviet employees brings in added risks, you are going to have to bring in young Americans whose ambition is not to be in Moscow for intellectual reasons to learn more about the society, but it's another place to make money. These people will be subject to pressures by the Soviets as we've seen with the Marine cases and eventually somebody will be recruited. Now people say to me that if you hadn't had Soviets on the site to sort of see who was vulnerable, then these people wouldn't have been picked up; well that shows a total ignorance of what goes on in Moscow.

You fire all of the Soviet employees and one of the first ones I fired by the way was the barber, a wonderful old lady who did nothing but pump the Marines and pump everybody else as to what was going on, and I fired her early on. Well, Marines need haircuts so they go off to the hotels and very charming young ladies do the barbering in hotels, so contacts can be made.

There is no substitute for picking mature people who will not get themselves into these problems and watching them all the time and building systems to keep these people from getting out of hand.


I find his reasoning persuasive. Will it improve security in Moscow today if we send over newly-hired fresh meat for Russian intelligence services, put them and their spouses and kids in housing all over Moscow, and have them interact with Russians in their daily lives of work and travel, recreation, medical care, social functions, and so forth? Is that exposure to hostile intelligence services really all good just because those American plumbers and electricians, unlike the Russians they replaced, have personnel security clearances?

I agree with Ambassador Hartman's philosophy. Let’s dispense with the security clearance games for American employees and simply use Russians for those service jobs, so we may frankly acknowledge that they are security threats and then handle them accordingly.

Meanwhile, if you're looking for one of those embassy jobs, you might start here.

I think this is one of those insoluble problems, you just have to go for the best result you can get.
GWB where are you?

Guys: I'm just waiting for something brilliant to pop into my head. Should be any day now! gwb

Laying up in the bushes were GWB, playing possum, well now you be expected to produce some scintillating commentary you lollygagger!

A Happy New Year to you gentlemen, and may 2015 bring you much happiness. I'm lifting a craft beer to your health and long life!

Thanks TSB! and Happy New Year to you both as well!! gwb

TSB and GWB:
A little music for 2014;
https://www.youtube.com/watch?v=gmQuIpM4h6A

Willie, The Redneck Dalai Lama! We might turn to him in 2015, after the election season gets going. A Jeb Bush - Hillary Clinton lineup will seem like The Ballad of Poncho and Lefty.