Nothing is Really Something 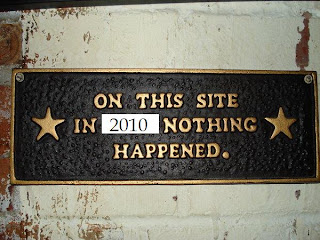 My recent tour of a few car-bomb prone places made me reflect on something the State Department lacks: a group award for every critical threat post where another year has passed without a terrorist attack. Accountability Review Boards are convened after a security-related incident occurs at an overseas post, but nothing at all happens when ... nothing happens. But something should happen then, IMHO.

It is no small accomplishment to make nothing happen to a diplomatic mission over a prolonged time in the present threat environment. We have thousands of employees living in the very same places where terrorist organizations are present, capable, and intent upon attacking us. So why don't they attack us everywhere, and all the time?

It is not because we rely upon the forbearance of groups like al-Qaida and the Taliban. Neither do we put an unrealistic amount of trust in our host country's obligations under international law to protect our mission and personnel. No, it is because we take responsibility for our protection into our own hands.

For everyone who has ever attended a counter threat training course, varied his times and routes of home-to-office travel, dutifully participated in a Duck and Cover drill, spent an unaccompanied tour, lived in an on-compound trailer or in a fortified residential compound, wore body armor, and obeyed security policies that limited his movements and recreational opportunities,

For everyone who has ever trained, equipped, and supervised our tens of thousands of local guards and high-threat protection contractors,

For everyone who has been a local guard or high-threat protection contractor (we know you could get another job a lot easier than you could another life, but you take the point anyway),

For everyone who has ever driven a fully-armored vehicle, prepared to drive out of an ambush,

For everyone who has ever installed so much extensive armoring and so many high-tech gizmos into a mission vehicle that he turned a common SUV into a ride more expensive than a Maybach 62 Zeppelin,

For everyone who has ever planned, designed, and constructed the physical and technical security countermeasures that make our mission facilities hard targets, even if architecturally unaesthetic ones,

For all the guys that we don't even see but who are out there watching it all 24/7,

And last but not least, for the U.S. taxpayer who makes it all possible,

CONGRATULATIONS. You made nothing happen at the most dangerous places on earth again this year.
Posted by TSB at 12:13 PM