This Could Have Made Me Go For A Ph.D. 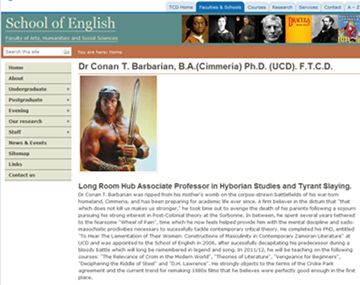 What a bummer that this was removed from the staff directory:

Trinity College Dublin has said it is taking seriously an incident in which a profile page, complete with image, was inserted on its website for a fake staff member named ‘Dr Conan T. Barbarian’.

His profile indicated he had been “ripped from his mother's womb on the corpse-strewn battlefields of his war-torn homeland, Cimmeria, and has been preparing for academic life ever since”.

“A firm believer in the dictum that ‘that which does not kill us makes us stronger,’ he took time out to avenge the death of his parents following a sojourn pursuing his strong interest in Post-Colonial theory at the Sorbonne.”

The profile went on to say Dr Barbarian completed his PhD, entitled ‘To Hear The Lamentation of Their Women: Constructions of Masculinity in Contemporary Zamoran Literature’ at UCD and was appointed to the School of English in 2006, “after successfully decapitating his predecessor during a bloody battle which will long be remembered in legend and song”.

“In 2011/12, he will be teaching on the following courses: ‘The Relevance of Crom in the Modern World’, ‘Theories of Literature’, ‘Vengeance for Beginners’, ‘Deciphering the Riddle of Steel’ and ‘D.H. Lawrence’.

Whoever put that profile up is just the kind of academic mentor I'd like to have.
Posted by TSB at 5:53 AM

TSB: My nephew is part Nez Pierce indian and loves to hunt elk with a crossbow. (He's never tried to kill one. It's a nature thing.) His dad says archery comes from an old indian word that means "bad hunter"! gwb

I heard it also means "vegetarian" in several Indian languages.

Seattle may not have a baseball team but we have a great baseball writer!
gwb