Secretary Tillerson Isn't Press-Friendly, and We Should Be Okay With That 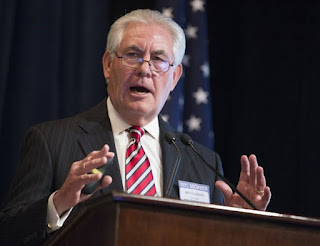 Regarding our evidently press-shy SecState Rex Tillerson, am I the only one who sees him in the mold of former SecState George Shultz (1982 to 1989)?

Like Tillerson, Shultz (see his official bio here) was also a former CEO - in his case it was Bechtel and the international construction business - and became Secretary of State unexpectedly. Shultz had been an economic advisor and budget guy before President Reagan asked him to replace Al Haig when the later resigned after only seven months in office.

I watched Tillerson's "Hi, I'm the new guy" first day speech, and hearing him stress safety as a core value made me flash back to seeing Shultz at a townhall meeting back in his day (I am sooo old!) and hearing him equate security of diplomatic operations to industrial safety in the construction business. Both times I was a little surprised, but figured yeah, okay, I guess.

Shultz didn't do a lot of flying around Special Envoy-like, but mainly stayed in the office and ran the organization. Fundamentally undramatic. I don't remember him being a media star. He seemed to have the economist's mindset, in which you make an input and then wait six or eight months to see if it had an effect. There's not much immediate gratification there to excite the news media.

Tillerson gives every indication so far of being the same pragmatic CEO type of Secretary. We could do a lot worse, even he never gets friendly with the press corps.

TSB: A curious thing happened on the way to the investigation...Russia's Largest Bank Confirms Hiring Podesta Group To Lobby For Ending Sanctions
Mar 9, 2017 12:22 PM
Former President Barack Obama imposed the Russian sanctions following the break out in violence in east Ukraine in 2014.

Podesta’s efforts were a key part of under-the-radar lobbying during the 2016 U.S. presidential campaign led mainly by veteran Democratic strategists to remove sanctions against Sberbank and VTB Capital, Russia’s second largest bank. snip
“The Democrats are sitting there trying to convince us that the Russians are trying to throw the election to Trump,” a congressional aide who requested anonymity and met Teplitskaya told TheDCNF.

“And then they’re with us here in the House and meeting directly with the administration behind closed doors on the issue of the sanctions. The hypocrisy could not be any richer,” he said. Regular readers will recall that the Sberbank-Podesta relationship goes back many years. Sberbank was the lead financial institution in the Russian deal to purchase Uranium One, owned by one of Bill Clinton’s closest friends, Frank Giustra. Giustra and Bill Clinton lead the Clinton-Giustra Enterprise Partnership, an integral part of the Clinton Foundation. Giustra has additionally donated $25 million to the Clinton Foundation.

1. I learned from Limbaugh today that the medicaid part won't pass unless undocumented people are guaranteed they don't need proof of identity to get it. Ryan's version includes this because even R's don't want to lose the hispanic vote. That guarantees fake ID's will be the order of the day.
2. This Huffpo reporter gives a great summary of the current difficulty Ryan's proposal is in: ObamaCare's Last Stand. https://youtu.be/EXNpD6LvSPk First of all, Ryan failed to get outside conservatives to back his plan and the next day they all condemned it. It basically kicks the can down the road until 2020.

The most ridiculous thing besides giving rich people a huge tax break is the idea of charging people who have a gap in coverage a 30% premium surcharge. Every healthy young person is going to wait til they get sick and then pay the surcharge so participation will be low and rates will be higher. By 2018 election time this will be all the Republicans fault. Unless Trump gets a grip on this thing and can rally his supporters this thing has no chance and Ryan could be replaced soon. gwb

TSB: It looks like Turkey and Europe have just about had enough of each other. gwb
Turkey Says "Migrant Deal Has Ended", May Unleash Millions Of Refugees

sounds like Merkel and Trump will have plenty to talk about

TSB: Great post here on the 3 wars over oil likely to break out in the next couple years.
gwb How Shale Is Reshaping The World: Three New Wars
http://www.zerohedge.com/news/2017-03-13/how-shale-reshaping-world-three-new-wars

TSB: As an aging 71 yo medical genius even I have trouble remembering the important details of all this corporate collusion: Thank God for the comments section! gwb

beemasters Manthong Mar 15, 2017 5:44 AM
I just don't understand Monsanto's business sensibility. Killing consumers, albeit slowly, is never good for long-term survival...unless they are also in the pharmaceutical industry as well. Oh wait...was that the reason Bayer bought Monsanto?

TSB:"Making the 7th Fleet Great Again" (Never trust a guy named "Fat Leonard") gwb
Navy officials have said that about 30 admirals are currently under investigation, though only a handful have been named publicly.

The scandal is one of the worst corruption cases in US Navy history and has plagued the military since "Fat Leonard" was arrested in 2013, after an international sting operation lured him from Singapore to San Diego.
In other news, Navy enlistments soared today...http://www.zerohedge.com/news/2017-03-15/rotating-carousel-prostitutes-defense-contracts-9-navy-officers-charged-bribery-scan

TSB: Obamacare became Trumpcare and now it's
Ryan Care! (and nobody likes any of them!) Pretty Funny! gwb

TSB: How many Goldman Sachs Execs does it take in the administration to conclude that our President has been taken captive by the Banksters? I just don't like a crook like Mnuchen running the country! gwb

TSB: Looks like Trump and Angela didn't have that much to talk about after all? And why isn't it 'Germaine'to mention Obama's apology for 'wiretapping Merkel's phone since 2002?? And what better confirmation can you get of the Brits surveiling Trump for Obama than to have Clapper & Co. come out and say: "We don't do that!"?? Podesta getting his aol account hacked was EPIC!! gwb

GWB: Trump and Merkel made an awkward couple anyway, but you're right that the NSA surveillance of Merkel hung over the meeting like the ghost of an issue the press did not want to notice.

I'm sure the Brits are 100 percent truthful in everything they have denied, however, the idea that the UK and USA signals intelligence establishments COULD do reciprocal targeting of each other's domestic persons has been a staple of commentary on the surveillance state for decades.