Did the practice of holding mid-air press briefings during SecState official visits begin with Henry Kissinger? I can't recall any earlier SecState being the kind of media star that Kissinger became, to his obvious great enjoyment. Or later Secretaries, either. Powell and Rice, for instance. I don't recall them having press retinues. Certainly they both valued their private lives, and kept them separate from their public lives. Kissinger, of course, went the other way, and made his public life the basis of his celebrated private life, at least for quite a few years back in the 70s.

Silent Rex is a return to the all-business model. In his one and only press interview during his current trip to East Asia he explained why he feels no need to bring a gaggle of reporters along. His reasons boil down to a rejection of Washington DC's invented tradition of mid-air press briefings, the presence of overseas press bureaus in his destination countries, and a preference for working rather than schmoozing with reporters while he travels.


EM: Are you concerned about the message that you might be sending China by not taking a traveling press pool with you into China, which restricts press access. There’s obviously been a lot of uproar over press access to you, especially on this trip. Will you ever do this again?

RT: Look, it’s driven by a couple of things. Primarily it’s driven — believe it or not, you won’t believe it — we’re trying to save money. I mean, quite frankly, we’re saving a lot of money by using this aircraft, which also flies faster, allows me to be more efficient, and we’re going to destinations that, by and large, the media outlets have significant presence already, so we’re not hiding from any coverage of what we’re doing. The fact that the press corps is not traveling on the plane with me, I understand that there are two aspects of that. One, there’s a convenience aspect. I get it. The other is, I guess, what I’m told is that there’s this long tradition that the Secretary spends time on the plane with the press. I don’t know that I’ll do a lot of that. I’m just not … that’s not the way I tend to work. That’s not the way I tend to spend my time. I spend my time working on this airplane. The entire time we’re in the air, I’m working. Because there is a lot of work to do in the early stages. Maybe things will change and evolve in the future. But I hope people don’t misunderstand ... there’s nothing else behind it than those simple objectives.

EM: I have heard the cost savings issue, but there has been such an uproar. Does that bother you or do you take their message, especially, like I said, going into China and the restriction of the press there?

RT: Well, as I understand it, most major news outlets have presence in China. They have bureau offices. They have people there. So it’s not like they can’t cover what’s happening there. The only thing that’s missing is the chance to talk more in the air.

T: There’s not going to be anything, in terms of access, visibility is what we’re doing, there isn’t any other, that I can see, there’s nothing else to it.

EM: Right so your answer is you don’t intend to change this model for your next trip.


I think we may safely assume he will not change this model of restrained enthusiasm for the press corps.

By the way, in fairness to the middle-aged Henry Kissinger of the '70s, he was not the only one to be impressed by Jill St. John, who, evidently, enjoyed the political-celebrity lifestyle back then. Kissinger was not made of stone. 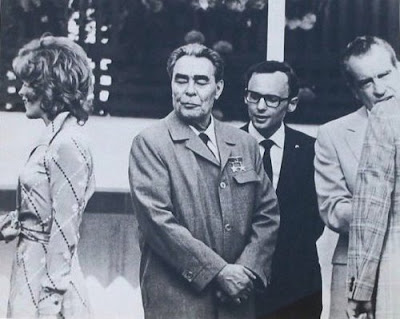 P.S. - As I type this, Jill St. John is being interviewed on Turner Movie Classics. What a long career! Especially for an actress who was in only one or two movies, and no memorable ones. She might outlast Kissinger, who himself is still getting around in his 93rd year.

Posted by TSB at 7:53 AM
Labels: Rex Tillerson, The Trumpening

TSB: This is great!! Maybe Trump will bring back
'Mexican Overdrive'and adding acetone to your gas to go along with stick shifts and cd's. I don't want Clapper listening in to my singing though. gwb
http://www.zerohedge.com/news/2017-03-18/trump-thinks-your-cars-gas-mileage-your-business

You can tell the era with her Fonda hair do.

TSB: I love the Sunday shows when there is some really "important" news and the way they deal with it is to refuse to bring it up. Is it true that the CBO or CBOE? can evalutate the health care bill and conclude that Obamacare can be repealed and replaced with just 51 votes?? Because apparently that is what just happened.

If that happens then the differences between the House and Senate can be settled in a reconciliation bill and the you have the replacement. It is said this will save $10 trillion over 10 years but I won't get my wheels on meals. Also, in an unrelated matter, my R headlight went out last nite EXACTLY 10 YEARS TO THE DAY SINCE I BOUGHT THE CAR!! gwb

GWB: I would love for stick shifts to come back. My current car is only the second one I've ever had without a stick. It's real driving, plus it builds character.

James: I hadn't thought of that! We dodged a bullet when Kissinger when for Jill instead of Jane back in that day.

TSB: I only listened to Comey and Gowdy interactions and have concluded that Comey is a
"Mugwump". And my question still would be, can you confirm or deny that Trump has been under surveillance by the FBI, CIA and NSA since the 90's and if so would that have been legal or illegal? Now, Mr Clapper, take a look at these database files from the Pima County Sherrif's office and explain to us what they appear to represent. Remember, you're under oath. Thank You!! gwb