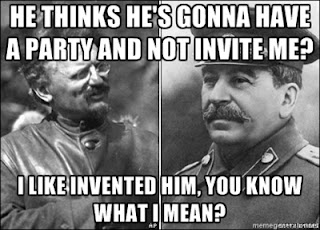 This is the most amusing online thingee I've come across lately. So good that I will swallow my pride and admit to having watched Mean Girls,* because you have to know that movie in order to appreciate It's Raining Mensheviks.

The idea is to find a picture of an early Soviet leader - be it a Menshevik, Bolshevik, Socialist Revolutionary, or whatnot - and add an appropriate quote from the movie. It works! Beneath the ideology, those revolutionaries were not unlike a teenage girl band of conspiratorial, cliquish, backstabbing, jealous, queen bees and wannabees.


*Just for the record, I watched it during a long boring plane ride, so I don't think it should cost me any points off my man card.

In Memoriam: 18 Years Ago In Karachi, Pakistan


On March 8, 1995, an unarmored U.S. Consulate Karachi shuttle van transporting employees was blocked in rush hour traffic and then fired upon by two men armed with AK–47 rifles. Two American employees were killed - Jackie van Landingham, a secretary, and Gary C. Durell, a communications technician - and a third was wounded.

There was no claim of responsibility, but the attack may have been in retaliation for the arrest one month earlier in Islamabad of Ramzi Ahmed Yousef, the main perpetrator of the 1993 World Trade Center bombing. Despite an FBI investigation and a $2 million reward for information, the attackers were never arrested. 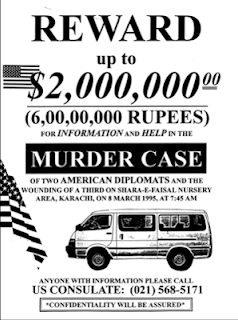