If Jamaica is fighting a war on crime, as DPS Brown says, then the Associated Press became a casualty of linguistic friendly fire when it reported yesterday that Jamaican police had "seized 3,300 missile warheads and a machine to make missiles and bullets" that they found concealed inside a barrel on the Kingston wharf.

Thousands of missile warheads? How large was that barrel they were concealed inside? And what exactly is a machine to make missiles?

The WaPo published AP's report about thousands of warheads (here) with no explanation, as did all the other big news media outlets I checked today, with the exception of the New York Times. I can't tell whether the NYT took a pass on the AP's missile-making machine scoop out of journalistic integrity or, rather, from a lack of interest in Caribbean news.

Al Jazeera's website not only ran the AP story, it elaborated on it (here) by describing "a huge haul of advanced weaponry" and working in mentions of international organizations, WikiLeaks cables, and official complicity in transnational smuggling. Are they just confused, or has someone there been watching old James Bond movies?


After seeing the Al Jazeera version tweeted and re-tweeted today as if it were a Really Big Deal, I was disappointed when I read the Jamaican Gleaner's original story (here):

The police last night declared aid would be sought from international partners as a probe continues in relation to the seizure of a machine which can make ammunition as well as thousands of warheads.

Head of the Constabulary Communication Network, Deputy Superintendent of Police Steve Brown, said during an interview on CVM Television that a team comprising the police and Customs officials discovered 3,300 warheads and the machine in a barrel on the wharf yesterday.

Brown said the team also recovered items which can be used to make rounds of ammunition.

"(Gun) ranges have applied over the years to get machines like this but the government would never allow it. It can be dangerous if it gets into the wrong hands."

[TSB note: Jamaica strictly controls the possession of firearms, and regulates and records the sale of ammunition. Hence, ammo reloading equipment "can be dangerous" there.]

Brown said Customs agents were carrying out routine checks yesterday when they became suspicious of a barrel.

He said the police were called in, the barrel was then opened and the contraband found in it.

So the mysterious machine they seized in Jamaica was just a reloading press, a common piece of equipment that is used by sport shooters and gun ranges to make small arms ammunition inexpensively.

As for the strange mention of warheads, that was cleared up when the Jamaica Observer published a photo (here) of the seized items.


I see two boxes of what look like cooper-jacketed pistol bullets, three clear bags of what might be empty pistol brass, some blue printed bags and some boxes I can't identify (maybe primers for the cartridge cases and dies for resizing the used brass?), and some paper bulls eye targets. But no missile warheads.

Evidently, "warheads" is a charmingly lyrical Jamaican way of referring to ordinary rifle or pistol bullets.

Bullets are, indeed, launched from the 'missile' of a cartridge. That is one definition of missile: any object thrown with the intention of causing injury or damage. I suspect that usage is more common in British than in American English, and possibly it was confusion over the meaning of "missile" that led the folks at AP and Al Jazeera to think that three thousand pieces of some sort of military munitions had been discovered concealed inside a barrel on the wharf in Kingston.

Nothing to see here, you journalists. Move along.

Posted by TSB at 7:06 PM 21 comments:
Labels: Most Eyebrow-Raising Headline of the Week

Breaking Ground In London, But Watch The Carbon Neutrality And Water Self-Sufficiency!

From the London press release:


In an important symbol of our enduring friendship with the United Kingdom, U.S. Ambassador to the United Kingdom of Great Britain and Northern Ireland Matthew W. Barzun and Director of the U.S. Department of State’s Bureau of Overseas Buildings Operations (OBO) Lydia Muniz broke ground on the new U.S. Embassy in London today.

The new Embassy, designed by KieranTimberlake of Philadelphia, Pennsylvania, will be situated on a 4.9-acre site in the Nine Elms Opportunity Planning Area and will include a chancery, a consular section, support spaces, a U.S. Marine residence, access pavilions, and parking.

Its design incorporates sustainable features at the leading edge of practice, including aspirations for carbon neutrality, a self-sufficient water system, as well as goals for minimum certification at Leadership in Energy and Environmental Design (LEED®) Gold and Building Research Establishment Environmental Assessment Method (BREEAM) Excellent.

OBO’s mission is to provide safe, secure, and functional facilities that represent the U.S. Government to the host nation and support our staff in the achievement of U.S. foreign policy objectives.


For its reported cost of one billion dollars, I hope that new embassy comes with an unprecedented degree of 'safe, secure, and functional' in addition to all of that greeny carbon neutrality stuff.


Budapest is a personal favorite city - and embassy - of mine. I'll be sorry if the day ever comes when we replace that elegant old building, drenched in the history of modern Europe from the Austro-Hungarian Empire to the end of the Cold War, with a 'safe, secure, and functional' nonentity of a Fortress Embassy.

... Islamic State of Iraq and al-Sham militants say sorry for decapitating a fellow extremist rather than enemy ...

Posted by TSB at 4:39 PM 7 comments:
Labels: Most Eyebrow-Raising Headline of the Week


The Department of State’s Bureau of Overseas Buildings Operations (OBO) announced four new embassy construction contracts this week, which is quite a couple more than it could have announced at this time last fiscal year, and concrete evidence [concrete, get it?] of Congress's commitment to provide increased capital  funding to replace our most vulnerable overseas diplomatic facilities.

The next four will be: an office annex in Moscow, Russia (see the press release here), and new embassy complexes in Nouakchott, Mauritania (here), The Hague, Netherlands (here), and Paramaribo, Suriname (here).

All of them will get the Fortress treatment. Or, in OBO's language, they'll get "safe, secure, and functional facilities that represent the U.S. Government to the host nation and support our staff in the achievement of U.S. foreign policy objectives." With an extra helping of secure, please. 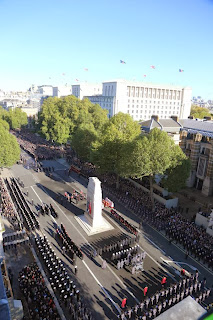 Today's Remembrance Sunday observation in London was attended by 10,000 veterans and civilian representatives. The half-muffled church bells ringing, the two-minute silence ended by the firing of a 13-pounder World War One cannon, and then the procession of leaders laying wreaths of remembrance poppies at The Cenotaph in Central London. We in Washington will have nothing like it tomorrow on our Veterans Day.

Beyond the merely ceremonial, we will also fall short of the Brits in the number of our national leaders who are conspicuously military veterans. Okay, the British Royalty are something of an exception in that they are expected to serve in, or at least hold honorary positions in, the military; starting with the Queen herself [here] and on down to her grandsons, they have really served in real wars. But so have many of the other national leaders and politicians that I saw laying wreaths in central London today.

When I think of our President, Vice President, and cabinet officers, I don't see a lot of veterans. In fact, I can think of only two, Secretaries Kerry and Hagel. Plus, of course, the ex-General who runs the Department of  Veteran's Affairs, but I would think it must be obligatory to find a veteran for VA.

After looking up the bios of our Congressional leadership, I see that House Majority Leader John Boehner enlisted in the Navy after High School but was medically discharged after only a few weeks. That makes him the only veteran among our House and Senate majority and minority leaders and whips.

Looking back to the last Presidential election, only two of the dozen or more primary and general election candidates served in the military. Ron Paul had been an Air Force flight surgeon, and Rick Perry had been an Air Force C-130 pilot. Then there was Herman Cain, who was a civilian employee - ballistics analyst - of the Navy Department while doing graduate studies in computer science. That's it. Nobody else.

If our present government leadership were to muster every veteran among them for tomorrow's Veteran's Day ceremonies, would they be able to fill a street in downtown Washington DC? I doubt it.