Former Afghanistan Hostage on Trial for Abusing his Wife

Today was the second day of testimony by Caitlan Coleman in the trial of her estranged husband, Joshua Boyle. See the details here.

Joshua Boyle is the weird Muslim-obsessed self-described "pacifist Mennonite hippie-child" from rural Canada who took his very young and very pregnant American wife on a walking tour of Afghanistan several years ago. They and their children ending up staying in Afghanistan and Pakistan for the next five years as the involuntary guests of the Haqqani network until they were rescued by Pakistani forces in 2017. See this post about their return to Canada.

Caitlan Coleman was eerily silent when they returned, saying nothing in press interviews. That was a clue. A few months after they returned, Boyle was charged with 19 counts of abusing her. The charges include assault with a weapon, sexual assault, and forcible confinement. The abuse took place both in Afghanistan and in Canada.

Caitlan's testimony is devastating, and if Boyle has a defense I haven't seen it. I recall that he put off a distinctly creepy vibe when he spoke to the news media back in 2017, but I couldn't have guessed the half of it. 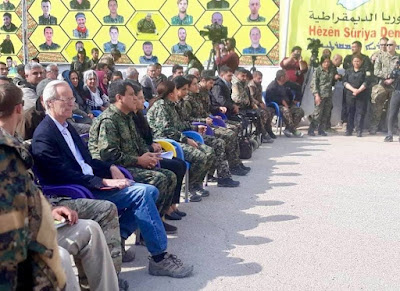 I'm pleased to see he was wearing comfortable shoes and no necktie. A practical man with common sense.

Human rights lawyer, 50, branded Air India crew 'money grabbing c***s' in mid-air rant after being refused bottle of wine and twice being caught smoking, court hears as she admits being drunk on an aircraft - Daily Mail

Favorite part: The lawyer, who is Oirish.

"An international human rights lawyer who launched a shocking tirade on a plane where she spat at a flight attendant has pleaded guilty to being drunk on an aircraft and assault ... The business class passenger demanded to speak to the pilot after cabin crew denied her another bottle of wine due to her level of intoxication."

"The lawyer, who is Irish, will be sentenced at Isleworth Crown Court on April 4 after magistrates said the offence was too serious for them to deal with."

"She was given three bottles of wine with breakfast 'immediately after takeoff' but began to complain when she was refused more. Miss Smith said: 'She got up from her seat and began swearing and shouting. She was shouting that she was a 'f****** international lawyer' and telling them to 'f*** off'.' She also shouted: 'You f****** arses, you f****** Indian money-grabbing c****.' Burns then went into the toilet to try to light a cigarette before she was given a verbal warning three hours into the flight, the court heard ... She shouted: 'I have done so much for you f****** Indians and f****** Pakistanis, you should be grateful to me.' A cabin supervisor, Dastur Pervin, tried to intervene but she was also told to 'f*** off', shown the middle finger and assaulted, Miss Smith said ,,, After landing at Heathrow she was arrested on suspicion of racially aggravated public order, common assault and drunk and disorderly and taken to a west London police station."

Posted by TSB at 3:41 PM 5 comments:
Labels: Most Head Shakingly Bad Thing of the Week

Yes, that's the Julian Assange update theme song, in reference to the lightest-skinned person to ever come out of Australia.

Assange has been squatting in the Ecuadorian embassy in London since 2012 to evade extradition to Sweden in a rape case, charges which reportedly have now been dropped.

In September, Assange received a new Australian passport after several years without a valid one.

And now, we know Assange is the target of an active Federal grand jury in the Eastern District of Virginia, AKA the Rocket Docket and the Fed's favorite jurisdiction for trying national security cases.

Does he really plan to spend the rest of his life in that Ecuadorian embassy? He's been an unhappy - and litigious - guest, so I don't suppose Ecuador would be sorry to see him leave.

The Swedes dropped their case against him after only six or seven years, but I doubt that he can wait out the U.S. government so easily. Meanwhile, he isn't getting any younger. He might as well come out and face the music.