Joe Biden Gets Endorsed, But He Gives Bad Advice 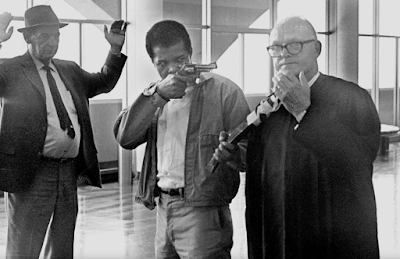 Joe Biden's electoral chances got a little bit better today when he scored a big endorsement, this one from Angela Davis, who is no longer a fugitive from justice.

To be fair, it was a half-hearted endorsement at best:


So I think that we’re going to have to translate some of the passion that has characterized these demonstrations into work within the electoral arena, recognizing that the electoral arena is not the best place for the expression of radical politics. But if we want to continue this work, we certainly need a person in office who will be more amenable to our mass pressure. And to me, that is the only thing that someone like a Joe Biden represents. But we have to persuade people to go out and vote to guarantee that the current occupant of the White House is forever ousted.

Anyway, he and Ms. Davis have at least one thing in common. They are both big fans of the sawed-off double-barrel shotgun. That's Ms. Davis' younger brother in the above photo, and he's got a shotgun which she purchased taped to the neck of Judge Harold J. Haley as he takes the judge hostage in the Marin County, California, Courthouse in August 1970.

Judge Haley was murdered shortly after the photo was taken. Ms. Davis went on trial for murder, kidnapping, and conspiracy for her role in helping plan the hostage-taking and purchasing the guns used in it, but she was acquitted in 1972 and went on to have a fulfilling career in politics and academia.

Joe's interest in double-barrel shotguns is well known, since he enthused about that to CBS News back in 2013. Joe recommends the double-barrel because you don't need to aim it, unlike the AR15 rifle, or anyhow so he said.

Personally, I prefer the handgun. But, whatever firearm you favor, please do aim it carefully, unlike what Joe advises. And also, please don't buy it for associates who will use it to commit murder. Not everyone who conspires to commit murder will be acquitted like Angela Davis.