Once Upon a Time, Joe Biden Was the President

"I was appointed to the Academy in 1965 by a senator who I was running against in 1972. (Laughter)" Amazingly, Biden also graduated from the Univ. of Delaware in 1965. https://t.co/5iPrzcpHZN via @whitehouse

Our POTUS is what may kindly be described as a serial fabulist. He always has been - if not worse (here) - but it seems that today his speeches are increasingly strewn with self-delusion.
What else can we call it when he tells the Naval Academy graduating class that he received an appointment to Annapolis himself once upon a time when, in fact and beyond any argument, he did not?
Misremembering? Age-appropriate memory loss? Confusion and disorientation? Maybe vascular dementia, especially given that he had two brain aneurysms back in 1988.
Right now, half of America and nearly all of its pundit class isn't calling his verbal symptoms anything at all, they're ignoring them. Maybe that benign neglect can go on for the next two-plus years.
If it can't, then maybe we'll have a first-ever constitutional issue around the removal of a President who is incapable of performing his duties.
Posted by TSB at 10:40 AM No comments:
Labels: C'mon Man!©, Joe Biden

State-Affiliated Media is Not to be Trusted, Says Twitter

Miss Dismal would be proud.

Posted by TSB at 11:58 AM No comments:
Labels: Disinformation, Miss Dismal

When Constabulary Duty's to be Done, a Dis-Info Cop's Lot is Not a Happy One

UPDATE: Nina Jankowicz has officially resigned from Disinformation Governance Board and the DHS. https://t.co/rLi3FvUNMw https://t.co/z4hdwTBFIB

Forgive the Gilbert and Sullivan, but that line fits the sad occasion better than anything from Disney. It seems that our Mary Poppins of Disinformation has resigned.
It's being reported on social media - so, remember, until DHS confirms it, it could just be mis-info or even dis-info sent out by malign foreign actors - that she has been feeling put upon and under-appreciated, and even mocked for all her adorable TikTok-ing.
So she's out the door just three weeks after being appointed.
And it's not just Director Poppins that's been made redundant. According to the WaPo today, the whole Disinformation Governance Board has been suspended.
Will DHS now give up on the Disinformation Governance Board as a bad idea? More likely they'll keep it on pause until the mid-term elections are over. Then, depending upon which party controls Congress and the appropriations process thereafter, the DGB will either be abolished or renamed and run by someone much more discreet and lower profile than Nina Jankowicz.
Posted by TSB at 11:53 AM No comments:
Labels: DHS, Disinformation, Miss Dismal

FBI? Is that you? https://t.co/hEknZzAN4s

My God, but what an ugly-ass building that is (this one)!
I'll repeat myself and say again that there is more architectural merit in one of the Justice Department's Art Deco doors than there is in the FBI's entire pile of brutalist concrete.
And to think it was the federal government's most expensive ever new office building project when it was built in the '70s. Ugly, dysfunctional, insecure, and the most expensive! That's quite the accomplishment.
The G charged us taxpayers $128 million for that fiasco. Oh? What's that? You suppose the Pentagon must have cost more? No, that one cost only 83 million back in the busy and patriotic year of 1943.
They don't make government office buildings like they used to. Whichever way the current year's political battle over the disposition of that ruin turns out, they'll never build them like that again.
Posted by TSB at 8:12 AM No comments:
Labels: FBI

Just a thought, but I'd like to see State commemorate more key battles of WWII. For example, think what they could say about Midway, which was THE turning point of the war in the Pacific.
Before that one, the Empire of Japan had won every battle it fought, plus one draw (at the Coral Sea). After Midway the Empire of Japan lost each battle it fought until it was forced to surrender.
Would it be completely out of the question to frame Midway as the key battle that ended the militaristic Empire and made possible the present democratic and more-or-less pacifistic Japan??
I'm about halfway serious.
Posted by TSB at 6:39 AM 4 comments:
Labels: Department of State, World War II

Oh, it's bad alright. Considering Delaware kept reelecting him for, what, 50 years (?), it must hurt to be underwater in Delaware polling today.
Not at all auspicious for Joe and the other Democrats as we creep ever closer to the midterm elections.
Posted by TSB at 1:38 PM 4 comments:
Labels: 2024, C'mon Man!©, Joe Biden

Congratulations to Patrick F. Kennedy, winner of the 2022 Director General's Cup for the Foreign Service. Amb Kennedy started his career in 1973 in the Bureau of African Affairs & retired as Under Secretary for Management in 2017. Today we celebrate his exceptional contributions. pic.twitter.com/l2XszbAI5R

I miss our former Permanent Undersecretary for Management, who, though he was certainly a micro-manager, was never less than proficient. The same goes for the team he gathered around him.
He had his detractors. One of his critics complained that you could never get the better of him or his team in a dispute on matters of management because they were always more knowledgable and better prepared than their opponents. Well, if that's the worst you can say of him, then I'm on Team Kennedy.
The last time I saw him he was already retired but was helping out the ladies at the annual book sale of the Associates of the American Foreign Service Worldwide, which I thought was very nice of him.
Posted by TSB at 11:31 AM No comments:
Labels: Undersecretary Patrick Kennedy

Biden has reopened a Palestinian Mission in Jerusalem. That sends a message that Jerusalem is not the whole and undivided capital of Israel.

[Update: It seems the above tweet has been deleted since this morning. A screen shot is below]
The issue is an old one, as is Haley's political alignment with Israeli (see the Jerusalem Post's story from last year: Does Nikki Haley's road to the White House start in Jerusalem?), but her outrage over that reopened Palestinian Mission in Jerusalem was premature at best.
The Biden administration is merely trying to open a Jerusalem-based mission to the Palestinians, and it's not trying very hard. The idea is a non-starter anyway, because a host nation - Israel - must approve any diplomatic premise designated within its territory, and they will not approve that one.
The administration fakes trying to open such a diplomatic mission, and Haley fakes some outrage in return. Both sides get the political bump they want. What's the harm?
In the immortal words of George Constanza, "it's not a lie if you believe it." 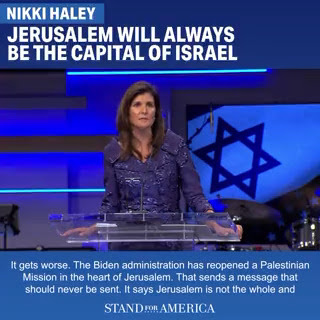 Boom in the Cannon Room 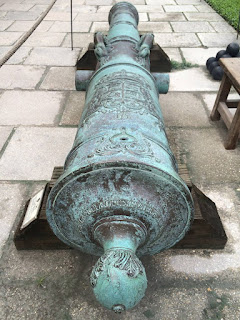 Roll Call's headline gets it right regarding the latest display of poor weapons-handling by the U.S. Capitol Police. It happened in the CANNON House Office Building.
Fortunately, the careless officer was only mishandling a Glock, so the potential damage was limited to what could be done with a .40 caliber round.
Yesterday's negligent discharge of a handgun inside a break room was not the first time the Capitol Police have been exposed as, ah, not very well-trained when it comes to firearms.
That's not to detract from the superb performance of some individual USCP officers, and in particular these two who stopped a mass killing by a crazed Bernie Sanders supporter who was armed with a serious military rifle. I mean, the officer who ran out onto that Alexandria ball field to confront the shooter while holding only a subcompact Glock had balls in both hands.
At least this time a Capitol Police officer didn't leave a Glock in the men's room, as they have done on an embarrassing number of occasions.
Posted by TSB at 6:33 AM No comments:
Labels: U.S. Capitol Police

Karaoke Night at the Ministry of Truth

You can just call me the Mary Poppins of disinformation 💁🏻‍♀️ https://t.co/eGV9lpctYn pic.twitter.com/WVQFA2bPmq

Aw, how can you not like our Mary Poppins of Disinformation? C'mon, it's like ABBA, you like it but you don't want to admit you do.
But her lyrics are seriously disturbing, though. Especially the part about "information laundering."
According to DHS Secretary Mayorkas's testimony to Congress this week, his Disinformation Governance Board will absolutely, positively, not infringe on the 1st Amendment rights of U.S. citizens.

“So what [the DGB] does is it works to ensure that the way in which we address threats, the connectivity between threats and acts of violence, are addressed without infringing on free speech, protecting civil rights and civil liberties, the right of privacy.”

Well, I notice that his self-described Mary Poppins of Disinformation has a rather broader view of her field.

Information-laundering is really quite ferocious,
It’s when a huckster takes some lies and makes them sound precocious,
by saying them in Congress or a mainstream outlet,
so disinformation’s origins are slightly less atrocious

Correct me if I'm wrong - or rather, misinformed - but isn't Miss Dismal scolding persons in Congress and mainstream media outlets for engaging in free speech? Because it sounds like that's what she's saying.
Now that Mary Poppins is in an official position to do something about those lie-launderers in Congress and the press, what will she do?
I suppose, with typical Mary Poppins magic, she could go ahead and let them speak but then prevent anyone from hearing them. You know, outsource it to the private sector to do an end run around the 1st Amendment. Take that, lie launderers!
Whatever she does, I just hope it's musical.