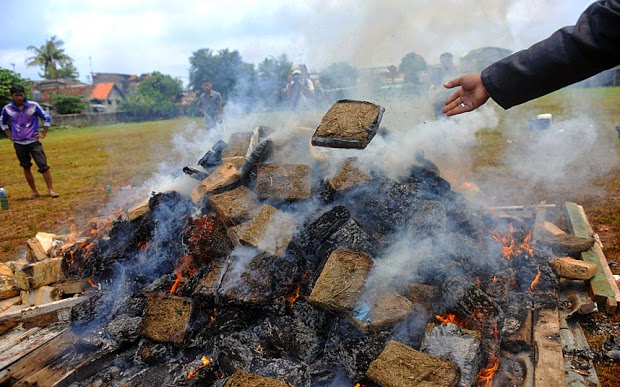 Posted by TSB at 9:08 AM 11 comments:
Labels: Most Eyebrow-Raising Headline of the Week

Rep Chaffetz Wants To Throw a Net Over This City

Judging by the enthusiasm with which he badgered the Director of the U.S. Secret Service at yesterday's Oversight Committee hearing, Representative Jason Chaffetz, the bad-ass wannabe who represents Utah's 3rd District, seems to have found a new pet project and outlet for his Walter Mitty side.

If the Secret Service keeps giving him such great material for oversight he might even forgot about his other pet project, embassy security.

Okay, so yesterday's hearing was an utter embarrassment for the Secret Service. Both sides of the Committee took turns hitting the witness hard, and the Service had it coming. But then, about two and a half hours into it, Chairman Chaffetz suddenly peeled out of formation and launched into an outburst of threats and obsolete cop jargon directed at the evidently disturbed woman who initiated this latest scandal when she dropped a package in the street in front of White House on March 4 and then drove off, escaping arrest until two days later.

Chaffetz told the Secret Service Director how he would have handled that situation.

Yes, he actually said I want a net to go over this city. Where did he get that from, some old film noir hard-boiled detective movie on TCM? It's of an era with 'if that dame tries to scram outta here, I'll pull my roscoe and ventilate her! Sweat that broad under the hot lights back in the squad room and she'll open up like a cheap suitcase! And don't youse let that doll talk to her mouthpiece until she spills the beans!'

His strange rant was promptly posted on the Oversight Committee’s You-Tube channel within minutes:


That Secret Service hearing was such a great stage for histrionic politicians that Trey Gowdy temporarily dropped his Benghazi select committee investigations to do some hasty and ill-prepared questioning of his own. He even stepped on Chaffetz's toes a little, trying to horn in on Chaffetz’s prerogative as Chairman for this one.

Gowdy mostly did some pointless quibbling with the Service's Director over the relative importance of Congressional oversight versus the Service OIG's investigative interest. Amusingly, he referred to "dueling narratives.” I think that's a bad phrase for someone who speaks with such a pronounced Deliverance accent.

The entire hearing is embedded below, just in case you're a glutton for punishment.

She'll Have Fun, Fun, Fun, Until the FEC Takes Her Donors Away

Fun? Is that really the last word Hillary wants to leave Americans with before she stops doing paid talks and makes her presidential campaign official?

I realize that her lame remark about fun camps for adults was just Hillary pandering to a paid audience of the New York and New Jersey Tri-State CAMP Conference. But still, doesn't she have an adviser with enough sense to steer her away from that image? It clashes with the Hillary Rodham Clinton that we all know and - some - love.

Hillary Clinton: the party-hearty Fun Candidate for 2016? No. That does not work for her.

The "fun camp" stuff came up during Hillary's Q&A with Jay Jacobs, host of the event. Jacobs is a camp director himself but, much more pertinently, is also the chairman of the Nassau County, Long Island, Democratic Party and a member of the Democratic National Committee's credentialing committee. Obviously, then, the "fun camp" stuff was far from extemporaneous. Hillary intended to do that.

Self-awareness. Does she have any?

Once HRC finally announces her candidacy, the Federal Election Commission rules on campaign cash might ruin some of her fun.

Posted by TSB at 10:50 AM 6 comments:
Labels: Hillary Rodham Clinton

Submitted for Your Approval

"So much America right now."

Having an Awesome Time at the Latest Secret Service Embarrassment

Is that what it sounded like when a senior Secret Service supervisor counseled the two agents who drunk-drove through a police crime scene in front of the White House the other day? Could be.

Okay, so here's my theory of what's really behind all these Secret Service scandals. They are actually a Machiavellian plot to recruit new agents. Specifically, to attract the government-averse millennial generation to Federal law enforcement jobs by making those jobs appear to be a never-ending Will Ferrell movie.

The Service's agents can't possibly be so reckless and undisciplined as you would think from all the embarrassing incidents they have racked up from Colombia to Key West to the Netherlands, can they? They can't possibly spend so much time drinking and partying on duty and getting away with it, can they?

But, if they could, then the average twenty-something male slacker might get the impression that it would be totally AWESOME to be a Secret Service agent!

I am convinced of this after reading the WaPo's report on the awesome time two USSS agents had the other night:

Two Secret Service agents suspected of being under the influence while striking a White House security barricade drove through an active bomb investigation and directly beside the suspicious package, according to current and former government officials familiar with the incident.

Police quickly secured [the scene of a suspected unexploded bomb] with tape and called an inspection team to check the package for potential explosive materials or other dangers.

But shortly before 11 p.m., the two high-ranking Secret Service agents, returning from a work party at a Chinatown bar about eight blocks from the White House, drove their government car through the crime scene. According to people familiar with the incident, they drove through police tape and then hit a temporary barricade, using the car to push aside some barrels. An agency official said Thursday that the car was not damaged.

The episode was caught on surveillance video. Investigators who reviewed the video of the incident initially said they could not be sure whether the pair drove very close to or over the suspicious item wrapped in the shirt, one law enforcement official said. But after reviewing more video later Thursday afternoon, the official said, they concluded that the agents’ government car drove directly next to the package.

Secret Service officers on duty that night considered the agents’ behavior to be erratic and suspected they were drunk, according to current and former officials familiar with the incident.

The officers wanted to arrest the agents — but a more senior supervisor at the complex told them to let the agents go, the officials said.

The Secret Service had a late night "work party" at a Chinatown bar? That's major awesomeness points right there. And then their boss told the cops to let them go after they bulldozed through a crime scene in their government car? The boss must have been playing the Vince Vaughn role, then. Tell me it wouldn't be super-awesome to have Vince Vaughn as your boss and Will Ferrell as your partner.

Mark my words: the Secret Service will be flooded with recruits, so long as they keep these scandals coming.

Posted by TSB at 8:23 AM No comments:
Labels: U.S. Secret Service

A Tip O' the hat to WMAL's Chris Plante show for the above mash-up of the distinctive verbal cadences of Clintons in denial mode.

It must be true that old married couples grow to resemble one another. 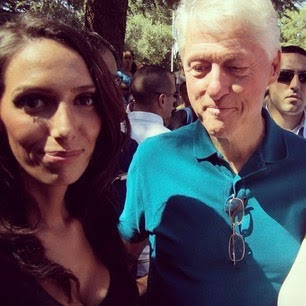 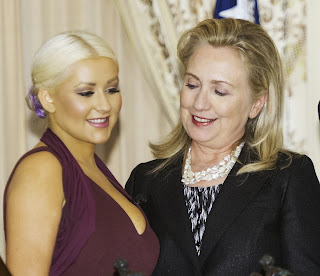 Posted by TSB at 2:38 PM No comments:
Labels: Most Eyebrow-Raising Headline of the Week

HRC: As Unacceptable As She Is Inevitable

There is really no need to feel sorry for Hillary. She'll handle this e-mail flap in her customary manner:

The former secretary of state and her advisers have decided to adopt a time-tested Clintonian approach: take a concrete step to ease the pressure, then wait out the storm, according to three sources with knowledge of her team’s approach.


The Atlantic had a good example of why Hillary's obsession with secrecy ought to matter to the voters:

At the time, Gawker noted that Clinton’s apparent use of the non-official account likely violated federal regulations governing records retention, and sent inquiries directly to Clinton and to the White House asking if messages to the clintonemail.com address were being retained."

Gawker also "filed a FOIA request with the agency for all correspondence to date between Hillary Clinton and Sidney Blumenthal," Trotter continues, "specifically including any messages to or from the hdr22@clintonemail.com account" [see this for the Gawker story]. We now know that email address did, in fact, belong to former Secretary of State Clinton. Had she been following the rules and forwarding all email about official business to government servers, the State Department would've found the Blumenthal email. They found nothing.

This is exactly why Clinton's behavior was unacceptable: It enabled her to conceal at least some official correspondence that the press and the public had a right to see, or at least to have acknowledged with an explanation, challengeable in court, of why the correspondence was exempt from the Freedom of Information Act.


Unacceptable it may be, but nonetheless, Hillary has stonewalled her way out of worse than this before. It does seems to me the mainstream news media just might be enjoying this particular snowballing scandal in a way they haven't with others, and even the left-wing media is calling it an unforced error on the part of the Clinton Machine.

Still, my money's on Hillary being able to ride this out with minimal damage to her campaign. Unless she's in prison or physically incapacitated, she'll be the Democrats' only candidate in 2016.

Yes, We Can(nabis), Except For You Feds


The WaPo has good advice for Federal employees living in the Washington DC area who are curious about last Friday's marijuana legalization - Pot became legal in D.C. today. Does anything change for federal workers?:


Marijuana became legal in the District of Columbia this morning, but federal-workforce rules remain unchanged for the roughly half million U.S. government employees and military personnel who live in the area.

Since 12:01 a.m., local authorities have allowed anyone 21 and older to possess up to 2 ounces of pot, although the drug is still prohibited on federally administered properties such as the National Mall, Rock Creek Park and even public housing.

Despite the new policy, which came from a voter-approved initiative in November, the U.S. government still considers marijuana to be an illegal drug and expects its civilian and military personnel to abide by federal guidelines.


A threatening letter sent to the Mayor of DC by an angry Utah man had no effect, and the legalization proceeded, except for federally administered properties.

So, my fellow Feds, keep those bongs in your pocket when you get to work this morning.