"According to a statement from the Ministry of Culture on Thursday, the government plans to work closely with the police to eliminate such performances, which are held with the goal of drawing more mourners."

Posted by TSB at 3:49 PM 9 comments:
Labels: Most Eyebrow-Raising Headline of the Week

Cheer Up, Marie, Everything Will Turn Out Fine

Marie, you should know that I'm on your side. So it pained me to see how State passed you over for the big job, and for an old white man, too! You've been victimized and disadvantaged by patriarchal oppression and male privilege. If I were you, I'd sue.

How did this happen? After you put up with all that criticism of your performance, unfair as it was, often sexist and almost always juvenile in nature, this is how SecState Kerry rewards your loyalty?

And don't worry about being compared to your new boss, Admiral Kirby. People just think he's more professional because he has a deeper voice and wears a blue uniform. But when you get right down to it, he has delivered exactly the same Obama administration messages that you have. He just does it without the sorority-girl vocals, blonde hair, and adorable glasses.

Don't you change a thing. You'll outlast this ex-Navy guy, and there is always a new administration coming along every four years.

Posted by TSB at 6:31 PM No comments:
Labels: Marie Harf

Clinton Spokesman Learns From the Master 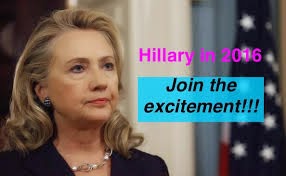 So the New York Times published its first big Clinton Cash story today, which was about how Cash Flowed to Clinton Foundation as Russians Pressed for Control of Uranium Company.


"[No one] has produced a shred of evidence supporting the theory that Hillary Clinton ever took action as Secretary of State to support the interests of donors to the Clinton Foundation," Fallon told The Times."


That statement sounds familiar. So slippery and equivocating, and it has the distinctive sound of Clintonian Denial. Where have we heard that statement before?

Why, from none other than Bill Clinton himself when he denied similar, albeit less lucrative, charges of corruption at a 1996 press conference:


“But I can tell you this: I don’t believe you can find any evidence of the fact that I had changed government policy solely because of a contribution.”

""Mother-of-three who 'dropped her son in a cheetah pit' ... is a CHILDCARE WORKER" - Daily Mail


"On Monday, a spokesman for KinderCare, a nationally-acclaimed education, care and resource provider, confirmed Schwab has taken a leave of absence from her management role at one of the centers in Columbus, Ohio."

Posted by TSB at 5:43 PM 6 comments:
Labels: Most Eyebrow-Raising Headline of the Week

History of the Bureau of Diplomatic Security

As we lead up to the 100th anniversary of its founding in 1916, the in-house history of the Bureau of Diplomatic Security of the United States Department of State has been made available in E-Book formats:


The new Diplomatic Security history, professionally researched and written by the State Department Historian’s Office, is an authoritative reference source and an archival record of the many critical duties, milestone events, prominent personalities, and worldwide locations with which DS has been associated over the past century. The first comprehensive, detailed history ever prepared, it is dedicated to the men and women who have served the Bureau of Diplomatic Security and its predecessors – the Office of Security (SY) and the Office of the Chief Special Agent of the U.S. Department of State – from the inception in 1916 up to the present. A Table of Contents and a master Index make the book easy to search for specific information purposes.


Click the link above for MOBI, EPUB, and AZW3 formats, or click this one for the PDF version.

You do realize, of course, that this document makes it possible to reference quite a few Matters of Official Concern from a publicly available source?

Have Hard Hat, Will Travel 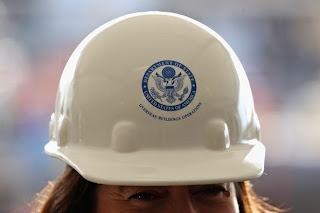 Diplopundit's Burn Bag entry about OBO's losses in engineering employees made me think back to the retirements and resignations I've noticed among my good friends in Overseas Buildings Operations over the last couple years. Yeah, I think there is indeed a pattern there.

A demoralization among OBO's engineers would kind of make sense in the context of OBO's overwhelming focus on Design Excellence, or, to use the new name for it, Just Plain Excellence. (The word "design" was dropped from the program's name about one day after the disastrous House Oversight Committee hearing in which OBO's Director and Deputy Director were severely criticized for favoring artsy & expensive embassy office buildings over functional & sensibly-priced ones.) In a Design Excellence organization, the architects are firmly in charge and the engineers will always play second fiddle.

According to the Burn Bag information, OBO has lost about 20 percent of its engineering staff. There is substantiation for that claim in the current USAJobs open announcement for Foreign Service Construction Engineers, which says OBO has "many vacancies" in that field:

A Foreign Service Construction Engineer (FSCE) is an engineer or architect, in the Bureau of Overseas Buildings Operations working specifically in the Office of Construction Management, responsible for managing Department of State construction projects overseas. The FSCE is a member of a U.S. Government team that ensures construction is professionally performed according to applicable plans, specifications, schedules, and standards. The FSCE must adhere to the highest standards of integrity, dependability, attention to detail, teamwork and cooperation while accepting the need to travel, to live overseas, and when necessary, to live away from family.


Those vacancies are for permanent, direct-hire, Foreign Service employees. In addition, there were also personal service contractor vacancies for OBO engineers announced on Monster.com five days ago. That one is looking for General Engineers, Mechanical Engineers, and Civil/Structural Engineers.

Why isn't there also a need for Electrical Engineers? After all, you can't spell Geek without two Es.

It looks like engineers are indeed exiting OBO in large numbers. Why that is, I can't be sure. But I have to think it is not a good thing for my friends in OBO.

Mama Was a Convict

"Life imitates Art far more than Art imitates Life" said Oscar Wilde. Maybe that's what's happening here, because the Indiana Women's Prison's Wee Ones Nursery program only started in 2008, while Mama Was a Convict was a smash hit by Country Bull back in 1975 in the great Burt Reynolds movie "W.W. and the Dixie Dance Kings." Which, by the way, you really ought to see (click here), even if you hate Burt Reynolds movies.

I bring up Mama Was a Convict because, I swear, the lyrics run all through this story I just saw about a convict mama, My Son Had His First Birthday Party In Prison:


Someday, when Jayden is older, Currie says she’ll tell her son all about his early life spent in prison with her. “I’m sure he’ll want to know why he wasn’t born where we’re from or why I’m always wearing khaki in most of the pictures,” she says quietly. “I’ll tell him. I’m not ashamed, because I’m proud of who I’ve become.”


It's all in the song - the drab prison dress, the furniture "in the cell where me and mama had to stay", the 'aunts' in the cell block, and the 'uncles' who control the keys. Especially the true meaning of the word "pride."

Currie, it's your life and all, but if I were you, I'd break the news to Jayden by singing along with Country Bull.