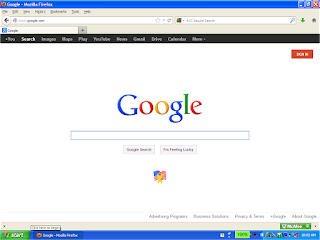 As per usual, Google did a little tiny ribbon for Memorial Day instead of one of its trademark Google Doodles.

I suppose if I were one of Google's indentured high-tech servants making less than the prevailing U.S. wage (thanks, Congress) I wouldn't put any effort into the occasion, either. 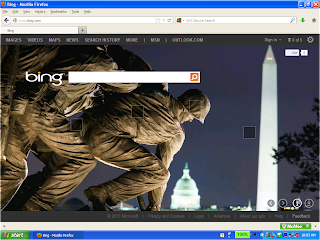 Bing, also as usual, has an appropriate background image.

The Embassy Security Bill Comes Due, And It's A Bargain

I'd be willing to pay more than $1 million for a Command and Control Hub like that, the kind they have in every Tom Clancy-esque movie. On the other hand, I wouldn't want to pay more than a few thousand for a simple guard booth.

Whoever it was who came up with the term "command and control hub" for today's New York Times story (Additional Embassy Guards Will Come With a Steep Price) has a promising future in real estate sales.

I've noticed that the public imagination runs wild when it comes to Marine Security Guards. Almost everyone I know outside the Department, especially including those who have never visited a U.S. embassy, believe every embassy is protected by one or two platoons of Marine infantry who encircle the place to keep foreigners away.

Where do they get these crazy ideas? From movies like The Bourne Identity, in which about 100 Marines chase Matt Damon around the U.S. Consulate in Munich (an exceptionally unrealistic scene, but please enjoy), and Zero Dark Thirty, in which Marines in combat gear are shown outside the gate of the U.S. Embassy in Islamabad, rifles at port arms, shoving back any Pakistanis who come too close. Those are depictions of a normal day, not a riot or attack, or an emergency evacuation. Just the day-to-day for Marine Security Guards.

No matter how inaccurate that image may be, it will come in handy now that the taxpayers are getting the bill for setting up 35 new MSG Detachments. I predict there will not be one peep of discontent, since the taxpayers know they're getting $1.6 million worth of foreign-ass-kicking value from each of those Marines.

I see two take-aways and one bit of real news from the NYT story. First, the facilities needed to support this expansion - new Post 1 booths and Marine Houses - are where 90+ percent of the costs are. And second, the first new Detachment won't be in place until more than one year after the Benghazi attack, the incident which prompted the build-up. Lesson to be learned: nothing like this happens quickly or cheaply.

The story's last paragraph has the real news, which the Times might not have realized is news. SecState Kerry is quoted as saying that the priorities for Marine Security Guards have shifted, and their first responsibility is now to protect people, not classified information.

Most people probably thought that was always their first priority, but actually, it wasn't. (Indeed, the website of the Marine Corps Embassy Security Group still reflects the former, traditional, mission statement with its emphasis on protection of classified materials.) So now, maybe the public's high expectations of embassy ass-kicking will finally be met.

WASHINGTON — When the State Department fields the first of 350 additional Marine security guards at high-risk embassies and consulates around the world later this year, the price tag will be steep: about $1.6 million per Marine.

It turns out that about $525 million of the $553 million that Congress approved this year to deploy more Marine guards — fulfilling a recommendation of the independent review panel that investigated the attacks last year on the diplomatic mission in Benghazi, Libya — is going toward building new command-and-control hubs in the posts and living quarters for the Marines.

The department plans to send 35 new Marine detachments, with about 10 Marines each, to diplomatic posts over the next few years. The first 90 are expected to arrive by the end of the year, officials said.

The financing for the new facilities also covers living quarters, which would include bedrooms and common areas, as well as small gyms and cafeterias. The department prefers that the Marines live on the compound when possible, officials said.

[Department officials] said each of the new command centers and additional housing would be custom-designed, either as part of brand-new embassies or leased housing. The department is in the process of developing specific project plans for each of the new Marine detachments, with the first new facilities to be included in embassies under construction in Laos and the West African country of Benin.

Secretary of State John Kerry said Monday in outlining the recommendations from the investigative panel that the additional Marines would be added to the diplomatic posts that face the highest threats. “We’re making sure that their first responsibility is protecting our people, not just classified materials,” he said.

Most Eyebrow-Raising Headline Of The Week

Credit WaPo With An Assist 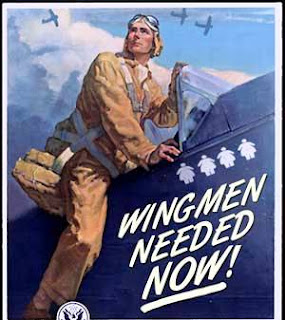 I don't think Jay Carney really needs any help putting his protective spin on the Benghazi talking points story, but the WaPo has his back anyway.

Here are the first two paragraphs:


New details from administration e-mails about last year’s attacks on the U.S. compound in Benghazi, Libya, demonstrate that an intense bureaucratic clash took place between the State Department and the CIA over which agency would get to tell the story of how the tragedy unfolded.

That clash played out in the development of administration talking points that have been at the center of the controversy over the handling of the incident, according to the e-mails that came to light Friday.


It's just about two agencies squabbling over who gets the blame, you see. Distasteful, but nothing having to do with the White House.

You have to read 14 paragraphs into the story to find out that "White House officials were directly involved in developing the talking points through discussions with the CIA, the State Department, the FBI, the Justice Department, and elements of the Pentagon."

Let's hope nobody reads that far. Meanwhile, the WaPo will be scanning the sky for bogies while Jay Carney pursues a target.

In the words of @iowahawkblog, "journalism is about covering important stories - with a pillow, until they stop moving."

Talk Is Cheap, And Talking Points Are Even Cheaper


Jay Carney certainly earned his pay yesterday. He must have been dizzy from all that spinning he did for the White House press corps.

"Those were Intelligence Community talking points ... the only edits made by anyone here at the White House were stylistic and nonsubstantive ... this all has been discussed and reviewed and provided in enormous levels of detail by the administration to Congressional investigators ... And if you look at the issue here, the efforts to politicize it were always about, you know, were we trying to play down the fact that there was an act of terror and an attack on the embassy ... I appreciate the question [by ABC’s Jonathan Karl, but] the things you’re talking about don’t go to the fundamental issues.”


I suppose that depends on what you think the fundamental issues are. Now that the mainstream press has discovered the twelve drafts of the Benghazi talking points, they seem to think it is a fundamental issue that Carney has been lying to them telling them untruthitudes for several months.

You can read all 12 drafts here.


White House emails reviewed by ABC News suggest the edits were made with extensive input from the State Department. The edits included requests from the State Department that references to the Al Qaeda-affiliated group Ansar al-Sharia be deleted as well references to CIA warnings about terrorist threats in Benghazi in the months preceding the attack.

That would appear to directly contradict what White House Press Secretary Jay Carney said about the talking points in November.

“Those talking points originated from the intelligence community. They reflect the IC’s best assessments of what they thought had happened,” Carney told reporters at the White House press briefing on November 28, 2012. “The White House and the State Department have made clear that the single adjustment that was made to those talking points by either of those two institutions were [sic] changing the word ‘consulate’ to ‘diplomatic facility’ because ‘consulate’ was inaccurate.”


Parse that Official Spokesman language and you'll see that Carney can claim to not be lying, even as he does not tell the truth. To say "the White House and the State Department have made clear" that only a single change was made to those talking points is not the same as saying that, in truth, only a single change was made. If somebody else has been lying, that isn't Carney's concern.

Carney took offense at some impudent questions from the press corps and pointed the finger of blame back at them:


"This is an effort to accuse the administration of hiding something we did not hide - well, at least we aren't hiding it anymore, ever since the talking point drafts were published by ABC News yesterday" Carney said.


I made up that last part about 'we aren't hiding it anymore.' That is, I made a non-substantive factual correction to what Carney actually said. And I advise that you not get all wrapped up in the queston of what I may or may not have changed about what he said, because that would just be a distraction from the fundamental issue here.

The best seven minutes of yesterday's press conference are embedded below.

A Benghazi Witness Who Will Not Be At the Table Wednesday

The House Oversight Committee hearing on Benghazi that is scheduled for Wednesday promises to be the real deal, with bombshells and whistle blowers and all. Given the professional positions of the three named witnesses, and their essentially apolitical nature, this hearing looks like it will challenge the established narrative of the Benghazi Accountability Review Board report.

Chairman Issa previewed some of the expected testimony during an interview on Face the Nation yesterday. (See the embedded video, above.) From the tidbits that have been released so far, it does not look good for at least one particular senior official, one who avoided the consequences suffered by a few middle managers after the ARB report was issued.

At the 10:50 mark of yesterday's interview, in the context of a question about where blame should be placed, Issa dropped the name of Undersecretary for Management Patrick Kennedy, who was "at the center of knowing everything" about Benghazi. At the 11:17 mark, Issa said that Kennedy was "at the table during what we believe at this point is a misinformation campaign at best and a cover up at worst."

Undersecretary Kennedy, of course, testified at the Committee's first Benghazi hearing in October 2012.

I notice that he did not take the center of the table that day. Quite the contrary. In fact, he left a whole lot of room between himself and DS's Charlene Lamb.