It has happened before, but one does not get used to seeing the news that a colleague you've known for many years, even one you haven't worked with regularly, has pled guilty to a crime.
See the details behind the guilty plea at Diplopundit's post, here. The bottom line is that $60,000, which DOJ's press release described as "lucrative kickbacks," went from an OBO construction contractor to an OBO employee in exchange for insider information that gave the contractor an advantage in winning contract awards.
The guilty party in this case is someone I like and have high regard for. Her motive was financial desperation, apparently. Considered on a scale of culpability, her offense ought to be seen as somewhat less than that of the contractor who purposefully cultivated her as his inside source.
Now, as for the real villain in the piece, OBO's construction contractor Montage Inc and its CEO, I have always had as low an opinion as one could have, right from the start of its engagement with OBO and many other government clients. There was just an auru of sleeze around whatever I saw of the company.
Good riddence to that guy.
Posted by TSB at 8:17 AM 6 comments:
Labels: Bureau of Overseas Buildings Operations, OBO 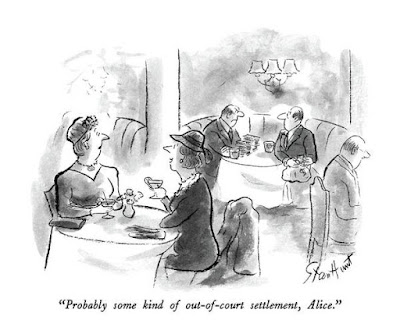 While there is surely a non-disclosure agreement as to the amount involved, Sky News is reporting today:

The details of the agreement have not been disclosed, but Mr Seiger said a resolution in the civil claim means Harry's parents, Charlotte Charles and Tim Dunn, will now turn their focus to the pending criminal case.

So then, it appears that the family is able to put some things ahead of the emotional catharsis of a face-to-face meeting with the American driver, contrary to their U.S. attorney's representation last month to the judge hearing the case.
Well, it's just as easy to focus on a pending criminal case from Ibiza as from home, innit?
Is this the end of the matter, or will there be more to come?
Oh, there will be lots more, at least if you credit the family's spokesman/advisor/lawyer/and all-around hustler, there certainly will be. But you shouldn't take him seriously, because he's obviously a grandiose malignant narcissist.
Specifically, there are now three things on the agenda. First, a criminal trial of the driver, then an inquest, and then a parlimentary inquiry into all the ways the UK government has outraged the spokesman.

"The family feel they can now turn their attention to the criminal case and the long-awaited inquest into Harry's death which will follow the criminal case ... There will also need to be a parliamentary inquiry into this scandal in due course."

The UK High Court has already ruled out a trial. A coroner's inquest following a trial seems out of sequence to me. But I'm all for a parlimentrary inquiry. All those UK officials who have for two years played to public sentiment and refused to talk hard truths to the family deserve to be hoist by their own petard now. Or rather, "in due course."
Posted by TSB at 12:18 PM No comments:
Labels: Harry Dunn

You Shake My Nerves And You Rattle My Brain, Things Like This Drive the Voters Insane

AP has reported the disconcerting news that "U.S. officials at intake centers in the United Arab Emirates and in Wisconsin have identified numerous incidents in which Afghan girls have been presented to authorities as the 'wives' of much older men" (see reports of child brides among Afghan refugees).
That will not come as news to those of you with access to official situation reports on the evacuation and resettlement of Afghans, but it does to your fellow citizens in places like Wisconsin. And they do not like it.
Even in 1957, the American public did not like it the least little bit when the very popular Jerry Lee Lewis married his 13 year-old third cousin, and the backlash sunk his career for at least a decade.
Joe Biden doesn't have a decade to wait out the public's anger and the political hit that his administration will take over this outrage, and rightly so. That's an irresistible story for all points on the spectrum. Everyone can hate it that the administration did not screen out the perpetrators of child marriage, whether their interest is from a legal, moral, cultural, religious, nationalist, feminist, government-hating, left-wing, or right-wing basis.
Just last week I thought the images of government contractor working dogs left behind in Kabul would become one of those ineradicable social media disasters for Biden, but now that seems to have dropped out of the news in favor of the child 'brides' story.
C'mon Man!© Stop the child sexual abuse and visa fraud malarkey before you lose both houses in the mid-term elections.
Posted by TSB at 11:28 AM 2 comments:
Labels: C'mon Man!©, Child Marriage, U.S. Embassy Kabul
Newer Posts Older Posts Home
Subscribe to: Posts (Atom)