So finally, after two weeks of delay, the SecState has made it official. He rejects the extradition request made by the UK Home Office in the Harry Dun case.

The reaction to that so far:

The family's spokesman has been on a tear this weekend, pitching his product like he's the new Billy Mays selling the new Shamwow. Last week he was telling the rubes that the U.S. government has approved 100 percent of all extradition requests ever sent from the UK, so it's a slam-dunk that they'll approve this one, too. Now, he's on to bemoaning how the denial of extradition has destroyed US-UK relations until the next 'reasonable' US administration comes to power and retroactively approves the extradition request. It goes without saying he is 100 percent certain that will happen. Just as he was 100 percent certain the American driver did not have diplomatic immunity in the first place, and then he was 100 percent certain the U.S. government would waive that (presumably non-existent) immunity.

Regarding that particular 100 percent certainty about how a post-Trump U.S. administration will surely agree to extradite the American driver, I am not at all persuaded. Recall how President Obama insisted on the diplomatic immunity of an embassy security contractor in Pakistan who caused the deaths of three Pakistanis, two of whom he shot and the third of whom was struck by a vehicle in an attempt by associates of the contractor to retrieve him from the shooting scene. A fourth Pakistani, the widow of one of the first three victims, later killed herself to protest the possibility that the Pakistani government would let the contractor go. That incident was about the worst possible challenge you could have to the principle of immunity, and a political-emotional mess at least equal to what's resulted from the Harry Dunn case, but Obama stood up to it.

And contrary to the constantly-cited sentimentality about how 'you can't just walk away' from a fatal traffic accident, diplomats do, indeed, walk away from fatal traffic accidents with some regularity. Consider the 2016 incident in which a convoy of armored vehicles transporting our US UN Ambassador Samantha Power in Cameroon struck and killed a 7 year-old child. The vehicle continued to Power's destination. No one was arrested or charged. The family of the dead child received a compensation package from the USG consisting of $1,700 cash, two cows, hundreds of kilos of flour, onions, rice, salt, sugar, soap, and oil, and a contribution toward a well for their village.

The Harry Dunn case has gone way beyond what could be settled with a compensation package, of course. The UK government, Northamptonshire local police, the family, and the general UK public all say they won't be satisfied with anything short of prosecution. But extradition won't happen; it actually can't happen, not without negating the practice of diplomatic immunity. So, a trial in absentia followed by a European arrest warrant for the driver might be a partial propitiation of public opinion.

Could a trial and arrest warrant also be a long-term solution? There is an interesting precedent for that in the now-resolved case of Sabrina De Sousa, a former U.S. Consular officer in Italy who was tried and convicted in her absence and later arrested pursuant to a European arrest warrant and returned to Italy. The situation is somewhat different in that, as a Consular officer, De Sousa did not enjoy immunity to the criminal jurisdiction of the host country (Italy), as diplomatic agents do. But close enough.

In her case, after the Trump administration intervened, the host country commuted De Sousa's sentence, reducing her penalty to the point that Italian prosecutors revoked their extradition order, and she went free with no warrant hanging over her in the future.

Suppose a trial in absentia in the Harry Dunn case resulted in a conviction for careless driving versus dangerous driving, and a sentence of no imprisonment? That wouldn't satisfy everyone, but it might satisfy enough of everyone to reduce public interest.

So far as the family moving on and going about its grieving process, that appears, sadly, to be a lost cause. Its spokesman/adviser/Svengali has got them convinced that nothing less than the American driver being hauled back to the UK will allow them any closure at all.

And, golly, he's always so certain of everything, that will surely happen, right? 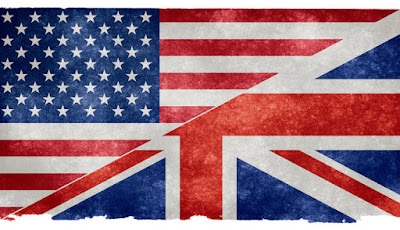 At long last, yesterday, January 10, the UK Home Office initiated an extradition request for the American driver in the highly charged matter of the traffic accident which resulted in the death of 19 year-old Harry Dunn.

Presumably, that means the UK Home Office has determined that it could prosecute the driver in that case despite the driver's having diplomatic immunity to UK criminal jurisdiction at the time of the accident. Or else, it has given in to political/emotional blackmail and passed the ball to the U.S. government where it knows the request will be denied. The last sentence of the Home Office announcement - that this is now "a decision for the U.S. authorities" - makes it sound like the latter.

Here's a primer on all you need to know about extradition law and procedure. The bottom line up front is that the U.S. SecState has final discretionary authority to approve or disapprove an extradition request. Clearly, he will disapprove this one, since SecState Mike Pompeo and his official spokesperson have firmly and repeatedly stated his position that the extradition of a person back to a country where that person was previously covered by diplomatic immunity would essentially negate diplomatic immunity itself. And the USG is not interested in abolishing diplomatic immunity.

But will this particular request even get that far? If I were a betting man, I'd bet the USG will reject the request - that is, not even consider it or process it for a decision - on Monday of next week.

In that bet, I think I am on the same frequency as the Dunn family's spokesman, who started to hedge his rhetorical certainty about extradition as soon as the request was made. In the BBC story of yesterday:


Dunn family spokesman Radd Seiger said she [the American driver] will "100% be coming back".

"I have no doubt in my mind, the only thing I can't tell you is when," he told BBC Breakfast.

"This campaign won't stop until Anne Sacoolas is back in the UK facing the justice system. There is no celebration and until she is back, we won't rest.

"This lady is accused of taking Harry's life, then fleeing the country. No-one is above the law in modern society. You don't get to move to a country, break a law in that country and then leave."

Mr Seiger said that under the circumstances, the family was "really pleased" the UK authorities had taken the "huge step towards justice", but if the Trump administration was to ignore or reject the request, it would be re-presented should another administration come into power.

Moreover, I don't think this extradition request would play well in any administration that might succeed the Trump administration. Besides, that next administration could just possibly be headed by Mike Pompeo, now that he's reported to be giving up on plans to run for the Senate.

A country that's got its swagger back would surely never allow its diplomats or their spouses to be extradited.

You Can't Be Too Careful With Snow 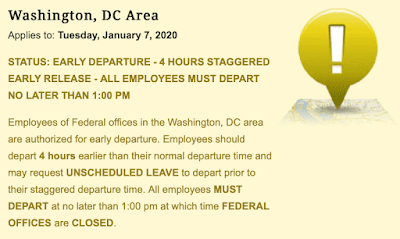 The afternoon rush hour came early for us in the Washington DC area today. To be precise, it came at 1:00 PM, which was the deadline for vacating our offices according to the OPM operating status for Tuesday, January 7, 2020

And, sure enough, it did start to rain, and then snow, right about 1 PM. The snow might get an inch deep before it stops around 7 PM tonight.

I fear for tomorrow.