"An elderly Florida Man today copped a plea to felony charges in connection with his bloody, botched castration of a man he met on a eunuch website, a crime for which he will be sentenced to three years in prison, according to court records ... The man’s testicles -- removed during a procedure that took several hours -- were in a pink container atop a bedside table in the makeshift operating room."

"During the raid, investigators took possession of a wide array of medical tools, many of which were covered in blood. Along with scalpels, clamps, hypodermic needles, and forceps, cops confiscated a surgical stapler, rubber tourniquets, a soldering iron, and “an assortment of skinning and filet knives.”"

TSB Note: How was it a "botched" castration when the patient's testicles were, in fact, removed? A castration with complications, it seems, but hardly a botched one. And, what's with the soldering iron???!!!

Posted by TSB at 8:38 AM 4 comments:
Labels: Most Head Shakingly Bad Thing of the Week

As you must know by now, yesterday the State Department announced that a crude swastika was found scratched into the wall of an elevator at Main State.

State Department Deputy Spokesperson Jalina Porter said in a briefing with reporters that the graffiti, which is synonymous with the antisemitism of Hitler’s Germany and the genocide carried out against six million Jews during the country's Nazi regime, was discovered late Monday evening.
“Unfortunately, late yesterday a swastika was found carved in an elevator in our building here, at the State Department,” Porter said.
“This graffiti has been removed and the incident will be investigated," she added.

The first report by Axios included a few more details plus a photo, and some speculation - for whose accuracy I cannot vouch - that the particular elevator was chosen because it is "near the office of its special envoy to monitor and combat anti-semitism."
Vandalism with anti-Semitic elements is not so rare, although it is unusual to find it inside a DC federal building, especially a prominent one.
It may be quite some time before we know who did it, or even have a plausible suspect, so it would be prudent to check our tendency to jump to conclusions about the offender's motive. Hate crime statistics from the Justice Department are broken down by the race and ethnicity of known offenders, and perusing them suggests to me that the odds are not overwhelming that the offender was wearing a MAGA hat.
Yesterday's incident is reminiscent of another one from last March when a Capitol Hill Police Officer was suspended after he was observed reading The Protocols of the Elders of Zion, of all things, while at work at an entry control point on the South Capitol Street entrance to the Longworth Building.
(FYI, the U.S. Holocaust Museum has a good background paper on that "most notorious and widely distributed anti-Semitic publication of modern times.")
That incident happened back in mid-March. At the time, the acting Chief of the Capitol Hill Police announced that she had immediately ordered the officer to be suspended until the Office of Professional Responsibility can thoroughly investigate. So, it's now late July, and you may be wondering what was done about the officer. I don't know, because the incident dropped completely out of the news. The Office of Professional Responsibility may be investigating still. Or, possibly the officer's motive may have been of a nature that does not lend itself to easy political exploitation, and the whole thing has been dropped down the memory hole.
Antisemitism is not peculiar to any particular race, politics, or national/ethnic/religious slant. Fanatics of the left, the right, and the just plain crazy might scratch a swastika into a State Department elevator for who-knows-what reason. See Black or White, It’s the Same Old Anti-Semitic Pathology for a number of examples.
Personally, I will wait and see. And I consider it even money that we will never find out exactly who did it, just as happened with the Capitol Hill offender.
Posted by TSB at 2:16 PM 2 comments:
Labels: Department of State 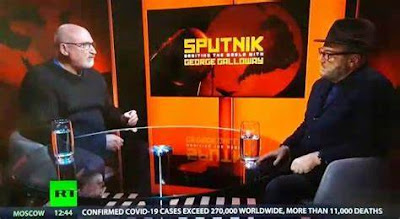 This week the U.S. Government entered the civil case as a party that takes no position on the issues but has interests of its own that it wishes to protect.
A small Northern Virginia news outlet had the most details I've seen so far on the wording of the protective order, and the immediate rebuttal by lawyers for the Dunn family (here):

Last Friday, lawyers for the U.S. government filed a motion in U.S. District Court for the Eastern District of Virginia in Alexandria where the Dunn family filed a lawsuit in 2020, arguing that the details of Sacoolas' employment should not be released in the interests of "national security."
-- snip --
In their motion, U.S. Justice Department lawyers argued that the details of who Sacoolas was working for in the U.K. should play no part in the civil case because "information concerning the United States Government has little to no relevance to an adjudication of any remaining issues in this case."
"Specifically, although the United States takes no position on the ultimate disposition of this private lawsuit, it has a substantial interest in certain limited information at risk of disclosure in further proceedings in this litigation because of the effect disclosure of such information may reasonably be anticipated to have on the national security of the United States," the Justice Department said.
Lawyers for the Dunn family, in a filing with the court on Monday, argued that the Justice Department's proposed protective order "contains imprecise, broad language that could be used to exclude information that is both relevant to Plaintiffs' case and does not implicate the Government's interests."
"Contrary to the Government brief, this is not a case where Ms. Sacoolas has fully accepted responsibility simply by admitting that she was on the wrong side of the road," the Dunn family lawyers wrote.

That last paragraph is curious, since it seems to suggest there could have been some cause or reason for the road traffic accident other than the driver mistakenly driving on the wrong side of the road. Does that seem likely? And why exactly would the plaintiff's lawyers be in any position to say what information does or does not implicate the government's interests?
Those questions will be answered by the judge hearing the case, T.S. Ellis, who is a Reagan appointee with a long record of handling terrorism and espionage cases. He has been given the information that the government wishes to protect. Who knows what any judge will decide, however, if I were a betting man, I'd bet on the plaintiffs being disappointed.
Meanwhile, the protective order has excited the Dunn family's disastrous advisor / spokesman into a new surge of twitter activity and media interviews. You just know that the real lawyers over here who are doing all the work in the case have got to regard him as a loose cannon, especially at this delicate stage when he could just possibly provoke Judge Ellis into sanctioning the plaintiffs or even dismissing the case when he spills the beans on whatever information it is the USG wants to protect.
Not to mention the even bigger liability that he or the family could conceivably commit a violation of the Intelligence Identities Protection Act. Judge Ellis is the kind of judge who would take a very dim view of anyone violating the IIPA.
I expect that the family's new team of U.S. lawyers are now learning why the original team dropped out of the case.
And you just know that loose cannon will spill anything he knows, or suspects, or wishes were true, or can pretend he has learned, about those USG interests. He is undoubtedly champing at the bit to feed insider tidbits to his favorite media figure, George Galloway, on the later's talk show on Radio Sputnik (yes, really, Radio Sputnik).
By the way, Radio Sputnik is the radio and website counterpart of RT (Russia Today) TV. RT is a subsidiary of TV-Novosti, an organization founded by the Russian state-owned news agency RIA Novosti in April 2005. Its division directed at the United States, RT America, was forced to register with the United States Department of Justice under the Foreign Agents Registration Act.
As for Galloway, he was a long-time Member of Parliament until he was expelled from the Labour Party back in 2003, so being a Russian internet shill is for him a late-life occupation.
Galloway is less well known for his brief career as a military strategist and advisor to Saddam Hussein’s regime. By his own account in I'm Not the Only One, Galloway advised Saddam Hussein's Deputy Prime Minister and Foreign Minister on the best way to handle a potential American invasion:

"The only war that can be fought against a superpower is a war of movement. I brought Tariq Aziz all the writings of Che Guevara and Mao Tse Tung on the arts of revolutionary war and he had them translated into Arabic. Fight a war of movement, take the uniforms off, swim among the Iraqi people and whatever their views on the regime, they will undoubtedly provide deep aquifers of support for a patriotic resistance.”

Inexplicably, Saddam didn’t take that advice, so, in all fairness, Galloway cannot be held responsible for Iraq’s subsequent defeat.
Galloway also had other, much more lucrative, conversations with the Iraqi regime, and those came back to bite him when the U.S. Senate looked into the matter of Iraqi oil allocations and under-the-table money sent his way while he was still an MP. See the United States Senate report concerning the testimony of George Galloway (here) for the details.
Well, one good grifter deserves another, and those two are as perfect a paring as I could want.
One last thought: could this civil suit have been avoided if the UK had only done the same thing the State Department did back in 1989 and required the diplomats it hosts to obtain large amounts of motor vehicle insurance and then be issued license plates exclusively through the Foreign Office? Maybe there's a lesson to be learned.
Posted by TSB at 10:29 AM 2 comments:
Labels: Harry Dunn

Joel Caston, an inmate at the D.C. Jail, made history Tuesday as the first from that correctional institution to be elected to a public office in the District ... Caston will serve as the advisory neighborhood commissioner (ANC) for single-member district 7F07 in Ward 7. In addition to the roughly 1,500 residents of the D.C. jail, the district includes the Harriet Tubman Women’s Shelter and residents of Park Kennedy, an apartment complex across the street from the jail ...Caston is believed to be the only incarcerated person to have been elected to a political office in the country at this time.