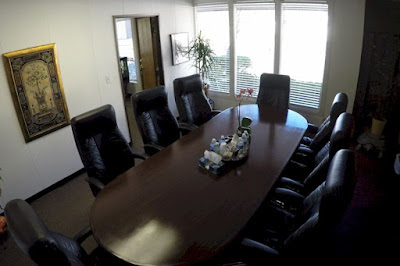 Upon the utterly unsurprising failure of the parties to reach a settlement, the judge in the case has now set a date for depositions.
That means two things. First, the mother of Harry Dunn will at long last have her nemesis cornered in a little room. Will she be attended by a full staff of mediators and crisis counselors at the moment of confrontation, as she insisted on as a condition of meeting the American driver when that opportunity was offered to her in the White House a year ago? I doubt it, but who knows? And will her carnival barker of a spokesman/advisor be present? He most certainly will be if he has anything to say about it, but, he won't have anything to say about it.
The second thing that will happen is that the Dunn family will also be deposed, since they bear the burden of proving the mental and emotional injuries which are the basis of their claim for damages. They may well be required to be examined by shrinks of the insurance company's choosing, for instance. Judging by the many interviews the mother has given since the civil suit began, I don't think she understands that depositions apply to both parties in a suit.
From Sky News, Harry Dunn death: Parents set to hear face-to-face legal testimony from son's alleged killer:

Mrs Sacoolas, and her husband Jonathan, have now been told they will be "deposed" by 23 July - meaning they will give their account of events under oath in front of Mr Dunn's mother, Charlotte Charles, and father, Tim Dunn.

The deposition will form part of the "discovery" process in the Dunn family's civil claim, in which correspondence and documentation relevant to the case will be handed over ahead of a trial at the end of the year.

Indeed, the mother seems to not understand that a civil suit cannot force the driver to return to the UK for a criminal trial, which even today she insists is "the only resolution."

But Mrs Charles told Sky News: "She needs to come back to the UK and go through the justice system. It's not up to us, or them, to decide what penalty, if anything should be handed down."

"She wants to find resolution; the only resolution is to face the UK justice system."

"She needs to move on with her life, we need to rebuild ours, but without her going through the UK justice system that can't be done."

Nevertheless, officials in both the UK and the U.S. have made it abundantly clear that the driver will not face the UK justice system, from whose criminal jurisdiction she had immunity from the day she arrived in the UK to the day she departed, as a matter of international law. A civil suit for damages cannot change that.

And so the stage is set for a great reckoning in a little room, sometime before July 23rd.

Posted by TSB at 6:58 AM No comments:
Labels: Harry Dunn

Posted by TSB at 7:29 AM 1 comment:
Labels: Most Head Shakingly Bad Thing of the Week

That approach is more personable then looking for dates on Tinder, I suppose. But frankly, I find it implausible that Satan would ride public transportation in Boston, or anywhere.

Now, my idea of a real Satan is someone who sounds Mick Jagger/Keith Richards-ish and lives in Las Vegas, where he buys and sells James Brown's soul and makes winner-take-all bets about dragging the Vegas Strip at dawn.


Posted by TSB at 2:25 PM 2 comments:
Labels: Most Head Shakingly Bad Thing of the Week

Yesterday, Jen Psaki was asked by a White House reporter - not identified - to clarify whether or not the diplomat's wife in the Harry Dunn road traffic accident and civil suit had diplomatic immunity. She referred the questioner to the State Department.
Here's the Q and A transcript:

Speaker 9: (01:02:05)
And if I could, Anne Sacoolas is still wanted in the UK on charges of causing death by dangerous driving. Now, the original rationale for her leaving the country with diplomatic immunity was that she was the spouse of somebody who was working at RAF Croughton, which under the terms of the agreement there meant she would have diplomatic immunity. It since seems to have emerged, from her lawyer in court here, that she was actually employed by the State Department or the US intelligence services. I wonder if you can clarify whether she was working in UK for the United States government and whether she does actually, as far as you’re concerned, have diplomatic immunity?
Jen Psaki: (01:02:41)
I would point you to the State Department. They, of course, engage in any questions about diplomacy, diplomatic immunity. Of course, the status of somebody who served during the prior administration, I don’t have anything more for you from it on it from here. Go ahead in the back.

She does like to circle back, doesn't she?
Now, the question of whether the diplomat's wife had diplomatic immunity has been repeatedly answered in the affirmative by, among others, the UK's own Foreign Minister and its High Court, as well as by the USG at every level from the former Ambassador to the UK to the former SecState, and the USG's position has been reaffirmed by the State Department spokesman for the current administration. That matter really isn't up for grabs. The jury is in, so to speak.
But I find it amusing that Psaki reflexively tosses the ball back to the Trump years, as if "somebody who served during the prior administration" is qualitatively different from the professional staff and their family members who are serving today. She separates herself from that bunch, and doesn't have any more on that/them from here.
In other news, the civil case against the diplomat's wife will take another step forward tomorrow when the court resumes. Psaki aside, there may be more on that matter then.
Posted by TSB at 2:13 PM No comments:
Labels: Harry Dunn, Jen Psaki, Psircles
Newer Posts Older Posts Home
Subscribe to: Posts (Atom)