Well, That Was Very Brief 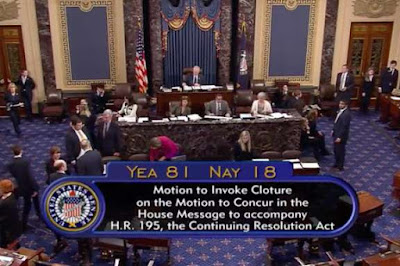 The Government Shutdown of 2018 barely had time to register with the public before the Senate Democrats voted to end it, with all but 16 - counting the two independents who normally caucus with them - of their 49 members voting to end cloture at 12:30 PM today.

Why such a very quick reversal? Here's a clue: a Harvard-Harris poll conducted just before the Friday night government shutdown found that 65% of voters would support a DACA deal that secures the Southern border, ends chain migration, and eliminates the visa lottery. That level of support was consistent across nearly every demographic group, including 68% of those who voted for Hillary Clinton in 2016.

Whats more, fully 81% of voters want to reduce legal immigration by at least half of its current number.

I'm guessing the Democratic caucus took one look at its internal polling on DACA and gave up that fight as quickly as they possibly could, getting nothing in return from the Republic leadership except the promise of a future Senate vote on some still-to-be-identified bill, something which neither the House nor the White House have so much as promised to consider.

Can Gov't Shutdown Theater Play When An Administration Won't Set the Stage? 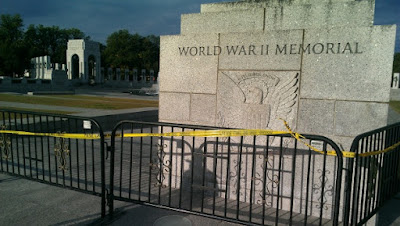 So THE GOVERNMENT IS SHUT DOWN, oh my! Of course, it's normally shut down on a Saturday anyway, but if the shutdown continues into Monday, here's how it will, or more often won't, effect my fellow feds:

Social Security checks will still go out. Except there have been no actual checks since March 2013, after which date all federal benefit payments have been made electronically, but, you know, they continue to exist as a rhetorical scare tactic.

Doctors and hospitals will still receive Medicare and Medicaid reimbursements. Federal employees will continue to receive health benefits even if their agency doesn’t make premium payments on time. According to OPM's shutdown guidance, the enrollee share of Federal Employee Health Benefits Program premiums will accumulate and be withheld from pay upon return to pay status.

Federal Employees’ Group Life Insurance Program enrollees will continue to receive coverage for 12 consecutive months without cost to the worker or the agency. Federal retirees under both the Federal Employees Retirement System and the old Civil Service Retirement System will continue to receive scheduled annuity payments. The Thrift Savings Plan will operate as normal except that furloughed employees will not be able to make payroll contributions while they are not getting paid.

The 850,000 or so federal employees who may be furloughed come Monday morning can safely assume they will get back pay when the fiscal hoopla is over, as has happened after each and every previous lapse in appropriations.

All law enforcement functions will go on as usual, and Transportation Security Administration officers will continue to screen airport passengers. National parks and monuments will remain open.

Speaking of those monuments, that's where Government Shutdown Theater began. The National Parks Director back in the Nixon Administration would protest budget cuts to his agency by shutting down parks and monuments for two days a week:


When the Nixon Administration cut the NPS budget in 1969, [NPS Director George] Hartzog responded by closing all the national parks for two days a week, including prominent landmarks like the Washington Monument. He later commented, “It was unheard of; even my own staff thought I was crazy.” There was political criticism by both Republicans and Democrats, but the magnitude of citizen complaints persuaded Congress to reverse its decision and restore the funds. Hartzog’s strategy was dubbed the “Washington Monument Syndrome” by The Washington Post.

We saw a lot of that strategy during the 16-day government shutdown in 2013, including the utter absurdity of yellow tape put up around open air monuments. There won't be any of that from the Trump Administration.

Like that tree that falls in forest, will the public notice a government shutdown that makes no noise?