Sentence in Harry Dunn Case to Depend Upon Display of Remorse 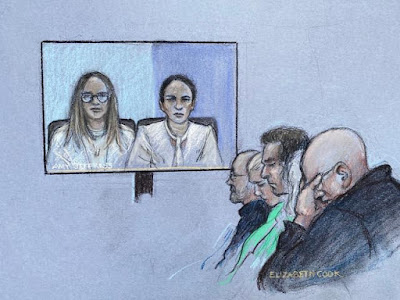 Here's the best of today's news reports on the Harry Dunn trial, US citizen Anne Sacoolas urged to prove ‘genuine remorse’ over Harry Dunn death, in which the judge urged the defendant to return to the UK for sentencing about one month from now as a display of remorse, with the implication that she will calibrate the sentence in accordance with the requisite remorse.

Adjourning sentencing until next month, Mrs Justice Cheema-Grubb told Sacoolas that although she could not compel her to face justice in person, it would provide “weighty evidence” of “genuine remorse”.

Speaking outside court, Mr Dunn’s mother Charlotte Charles said that “of course” she wants Sacoolas to return to the UK to be sentenced.

Mrs Charles told the PA news agency: “I do very much hope that she listens to the judge’s words and makes the effort to come back because that will truly show us all how remorseful she is.

Of course, the judge also acknowledged that she has no power to compel a return, or anything else, frankly, since the U.S. will not extradite someone with diplomatic immunity.
What will the judge do, you may wonder, if the defendant remains outside the UK on sentencing day? Impose a longer suspended sentence? Because that's just the kind of futile gesture she has available to her.
As for the prosecutor, he'd made peace with his surrender on the Crown Prosecution Service's preferred charge of dangerous driving, and noted that the defendant's plea to a lesser offense had been negotiated with both the family and his higher-ups.

“The plea that has been entered was one indicated at magistrates’ court and indicated indeed before that as being offered by the defendant.

“It has been considered at the very highest level and with the very greatest care and with close consultation with Harry’s family.”

We'll see if that close consultation survives when the defendant does not return.

BREAKING: Former US spy Anne Sacoolas pleads guilty to causing the death of #HarryDunn by careless driving. She appeared at the Old Bailey via video link from Washington.

That's one more step to a conclusion of this long drawn-out affair. Not the last step, though, since we've still got to get a sentence that can be served in the U.S. and presumably consisting of nothing more than a fine and community service, just as the defendant has offered to do all along.
The big deal today was that the Dunn family has evidently lowered its expectations to accept a conviction on the lesser charge of careless driving. That's a climb-down from what they've apparently been insisting on until now, and thus tying the hands of the Crown Prosecution Service.
So, first we'll have the sentencing, then the public humiliation of the defendant - at least, we will if the UK tabloids have anything to say about it - as she does whatever that community service consists of. Followed by the coroner's inquest that the family has been calling for, which in the UK must come after any criminal proceeding despite the evident pointlessness of that sequencing.
And after that, what happens? At best, the UK public loses interest in the matter, with a consequent loss of its political utility. At worst, the family takes offense at a piddling sentence and spends the rest of their lives the same way they're spent the last three years.
Since I'm an optimist, I hold onto the crazy hope that the mum will finally see through her charlatan 'advisor' and denounce him for the three years of wrong information, alienating bombast, and malignant narcissism that he's subjected her to. (Most unlikely, but I can hope.)
Posted by TSB at 7:53 AM No comments:
Labels: Harry Dunn
Newer Posts Older Posts Home
Subscribe to: Posts (Atom)