Harry Dunn Case: You Can't Get Elvis Without Colonel Parker 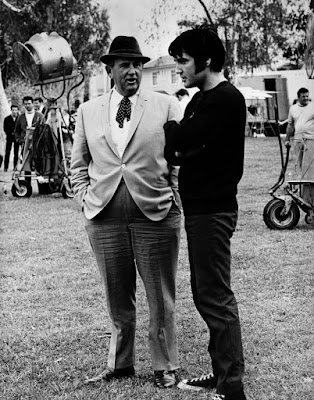 That's right, the latest twist in this sad story made me think of the disasterously bad manager of Elvis Presley, the one who dictated every step Presley made and pretty nearly destroyed his career. Parker was summed-up thusly: "The Colonel was often described as a cross between P.T. Barnum and W.C. Fields; in the King's court, he was combination court jester, Svengali and Robin Hood."
Wow, that sure does resemble someone I've blogged about quite a bit. He even has a physical resemblance to Parker.
I'm prompted to blog about him yet again because this week he and the family of the victim have whipped themselves up into a state of outrage that looks unprecedented. The cause of it all was the refusal of the U.S. Embassy in London to include the family's spokesman/adviser/lawyer in a personal meeting the family had requested with the Embassy's Deputy Chief of Mission. Compounding this alleged offense, the embassy directed its emails on the matter to the mother of the victim, the requestor of the meeting, and pointedly not to her spokesman.
The Embassy responded today:

The US Embassy have denied they’ve been disrespectful to Harry Dunn’s family after allegations of bullying. The parents of the Oxfordshire teen asked to meet with US Government reps but were told over email that their family spokesman could not be present #CapitalReports pic.twitter.com/IfdKpO990u

Here's a sample of the family spokesman's unbalanced response to this perceived slight:

Seriously, having heaped misery upon misery upon a grieving family, who would even think to get grieving parents into a room on their own when they are the very monster responsible for it? Beggars belief. And their reaction?! No self awareness? No apology?! They are poisonous. https://t.co/eVRRMAZrBP

"Misery upon misery ... monster ... poisonous" etc. It's enough to make me wonder why they sought a personal meeting in the first place. Such aversion to the DCM seems to have escalated all at once.
Here's the mother citing what she believes is her legal right to have her spokesman present and managing every aspect of her engagement with the Embassy:

When you seek to bully and intimidate a grieving mother into getting her into a room on her own when you were the one who added to her misery, are caught in the act and exposed, and then try to gaslight you’re way out of it. This tactic may work in the 🇺🇸 but not here. Be gone! pic.twitter.com/MFZDjoZZV0

Note she says "the Embassy is based in the UK ... I know my rights and I'm sticking to them." That refers to the Code of Practice for Victims of Crime (the Victims' Code), which is the statutory code that sets out the minimum level of service that victims should receive from the UK criminal justice system. It does not, of course, apply to the U.S. Embassy in London, or impose any obligation on the USG to address the family through their chosen representative.
That's the problem when you're managed by a Colonel Parkeresque pitchman whom you let dictate everything you do and say. He just isn't reliable. Only last week he was pitching a virtual trial of the American driver if she would do it from the UK Embassy in Washington because - as everyone who watches a lot of television knows - an embassy is the sovereign soil of its government. It isn't really, since the 'embassy as sovereign soil' thing is a myth. But, if only last week he believed that myth, then why doesn't he now believe that the U.S. Embassy in London is the sovereign soil of its government and therefore not bound by the UK Victims Code?
Sovereign or not, the U.S. Embassy in London may be on borrowed time, since Colonel Parker's Twitter feed is full of calls for nothing less than a break in U.S.-UK relations. Oh, you embassy swells will rue the day you trifled with him.
Posted by TSB at 1:35 PM 29 comments:
Labels: Harry Dunn

The UK authorities held a meeting with the Dunn family last week, billed as an update on what they've been doing in the months since they charged the American driver with reckless driving but were denied her extradition back to the UK by the U.S. Secretary of State. As usual, no one was satisfied with anything and we are no closer to a resolution then before. In fact, the events of last week most likely will ensure a couple more years of futile activity. The BBC reports:

Harry Dunn's family say they have been told prosecutors do not believe the woman accused of killing the teenager in a crash had diplomatic immunity.

Commenting after the meeting, Greg McGill, the CPS [Commonwealth Prosecution Service] director of legal services, said "Today we have met with the family of Harry Dunn to update them on the various steps the CPS has taken over the last 10 months to secure justice in this tragic case.

"The challenges and complexity of this case are well known, but the CPS and other partners have been working tirelessly to do all they can so that Anne Sacoolas faces the charge we have brought - causing death by dangerous driving.

"We know this is a very difficult process for the family, which is why we wanted to assure them personally that we continue to seek justice for them and for the public."

Now, since the UK Foreign Minister has repeatedly told the public and the Parliament that the accused did indeed have diplomatic immunity, a position which is apparently unchanged, the UK government is now taking two different positions on that critical matter. So far, it seems happy to live with that dissonance.
In a side note, the family disclosed the record of an internal email from the Prime Minister's office in which some perceptive person exclaimed "this guy is bad!" in reference to the family's spokesman / grifter / Svengali / ringmaster and all-round hustler.

I like the exclamation point. Not merely "bad" but "bad!" So we know that No. 10 employs at least one staffer of discernment.
Of course, the bad guy in question, instead of owning the bad guy label, immediately hid behind the parents, just as he did a few months back when the Northants Police called him out for misrepresenting something they told him about international notices.

“So to see that I am being referred to as a ‘bad guy’ is clearly a problem, but I do whatever the parents ask me to do, so any attack on me is an attack on these parents."

Actually, it's an attack on just him, and one that's thoroughly justified.
Ahead of the meeting with CPS, the family announced that it has filed a civil suit for damages (here) in United States District Court, Eastern District of Virginia. That will ensure time-consuming back-and-forth actions on jurisdiction, etc., before the suit can be tried, if it ever is, as well as provide a good reason to further delay cooperation with any UK court action.
The summary of the law suit, which you can read at the above link, contains the absolutely scurrilous allegation that the American driver did not call for assistance after the accident, but rather "left Dunn to suffer" and ultimately to die. In fact, as the driver's attorneys announced in a statement released to the public this busy week, she did in fact call the RAF Croughton police, who responded right away and assisted Dunn; a passing motorist she flagged down had already called for local emergency services. If anyone left Dunn to suffer and ultimately to die, it was the ambulance service, which took 43 minutes to arrive at the scene due to a dispatching mistake, and took two hours to get him to a hospital. The American driver stayed at the scene until police told her to go home.
The last word for this week goes to the family spokesman, always as voluble as he is ignorant of international law. A few months back he was surprised to learn that international law is not made by the United Nations. Now, he's telling the news media "Harry Dunn's alleged killer could be tried on British soil by holding virtual proceedings in the British embassy in the US, according to his family’s lawyer."
Only if you get your information about diplomatic immunity from movies like Lethal Weapon II is a foreign embassy the 'sovereign soil' of its country. In the real world, a foreign embassy is only a diplomatic premise which the host country recognizes as having certain privileges under international law, including legal inviolability. 'Sovereign soil' is a movie and TV trope.
Anyway, regarding that proposal of a virtual trial as a way to work around the refusal of the USG to extradite its diplomatically immune persons abroad and subject them to real trials, it's a non-starter. The same international convention that makes them immune to the criminal jurisdiction of a host country also makes them immune to having to give testimony in the court of a host country. The SecState would have to waive immunity in order to allow a trial in which the accused could give testimony, and he appears to have made his refusal to waive immunity absolutely clear.
Next up is a protest march on the U.S. Embassy in London on Tuesday, the first anniversary of the departure from the UK of the USG family member who was subsequently charged in the case. I do not anticipate any news being released then, since all the parties involved seem to have fired all their ammo last week.
--------------------------------
Update as of Monday, September 14. The rally-protest at the U.S. Embassy which had been planned for tomorrow is now cancelled. The family cited COVID-19 concerns as the reason.
Posted by TSB at 12:23 PM 19 comments:
Labels: Harry Dunn

The Russians are behind everything, even that bad lighting. https://t.co/fB314q58ur

For fans of Hillary, you can watch the full Instagram video here.
By the way, Hillary misspoke about those Congressional briefings. According to CNN, Director of National Intelligence John Ratcliffe has informed members of Congress that "the ODNI will primarily meet its obligation to keep Congress fully and currently informed leading into the Presidential election through written finished intelligence products" instead of in-person briefings, in order to ensure the briefings are not misunderstood or politicized, or selectively leaked.
I never feel at all sorry for Bill Clinton, but if I ever were to, this would be the time. Buster Keaton knew what I'm talking about.
Posted by TSB at 7:35 AM 23 comments:
Labels: Hillary Clinton, Hillary Rodham Clinton, HRC
Newer Posts Older Posts Home
Subscribe to: Posts (Atom)