The event has earned a prestigious position, both regionally and globally, on the calendar of heritage festivals and contributes to the revival of Arab heritage, said Wam, the state news agency.

Posted by TSB at 2:34 PM 10 comments:
Labels: Most Eyebrow-Raising Headline of the Week

Obama Marks the Start of Hanukkah 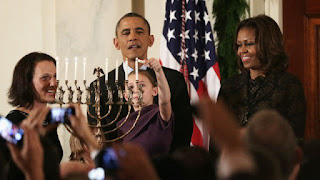 "... and then a miracle happened, and the tiny bit of oil lasted 8 full days, all those centuries ago in the Occupied Palestinian Territory" https://t.co/uqzlRz026Y
— Omri Ceren (@cerenomri) December 23, 2016

Posted by TSB at 5:01 PM 4 comments:
Labels: Most Eyebrow-Raising Headline of the Week

Rise of the Bollards

How can I send the Trump transition team at State a suggestion? Because I’d like to nominate the UK's Ruth Reed to be the next Director of Overseas Buildings Operations.

I learned of Ms. Reed in a recent UK Guardian article asking what can be done to prevent Berlin-style attacks in modern cities? For my money, she has exactly the right approach to the city planner's problem of securing public spaces against Berlin-style truck attacks.


The Berlin lorry attack on Monday that killed 12 people and injured 48 others raises a pressing question for security services across the world: what can be done to stop such attacks?

This seemingly new – and brutally destructive – form of terrorist attack is quickly becoming one that security experts fear the most: it can cause untold carnage and seemingly come out of nowhere. And there are obvious limits on the effect of practical measures.

Ruth Reed, the head of the Royal Institute of British Architects’ (RIBA) planning group and its former president, said counter-terrorism officers [in the UK] would reassess the security of open spaces in the wake of the Berlin attack.

“There will be a degree of reassessment of public open space inevitably after Berlin. I think that will happen all over Europe, not just here,” she said. “The British approach has always been to put in a degree of protection. They may want to think about increasing it – but it can be done discreetly.”

Reed co-authored industry-leading guidance (here), published in 2010, on designing for counter-terrorism without turning the nation into an uninviting fortress.

The most obvious form of protection against a truck attack are large barriers, known in the architecture business as “anti-ramming landscape features”. The black barriers around the Palace of Westminster are designed to stop a lorry attack at high speed. Up the road in Whitehall, there are barriers but they are hidden from view.

All US military and governmental buildings have “crash- and attack-resistant bollards” outside. The US state department “anti-ram vehicle list” lists several types of bollards to protect the perimeter of its embassies abroad. Some bollards are capable of stopping vehicles travelling at up to 50mph (80km/h).

“It’s not just the point of obstruction,” said Reed, who pointed out that measures including tight bends and restricted-width streets had been designed to prevent a large vehicle building speed before reaching a bollard or barrier ... “The important thing for public sanity really is that we don’t let this kind of anti-terrorism provision cloud our thinking because, if we develop some kind of bunker mentality, we’ve actually let them win,” she said.

“We want people to be able to go about their normal working and leisure times blissfully unaware that there is a risk that has been considered and reduced or eliminated. That’s the really important thing to say."


Now, it's not for nothing that Washington DC is known as The City of Bollards, so we do know a thing or two about using them discreetly. Check this out, for instance.

Bollards come in all kinds of shapes and sizes. There are low ones and high ones, fixed in place and operable ones, free-standing and tied together, ugly and decorative, old timey and modernistic. They can be made of steel, concrete, or polycarbonate. They can be intrusive or subtle, round or cylindrical, straight or curved, architecturally enhancing or utilitarian, blended into the background or black-and-yellow striped. They can even be repurposed old cannons half-buried in the ground, a common practice in the 17th and 18th Centuries, examples of which can still be seen today in most old port cities.

If you spend any time in a city, you can see bollards all around you as you go about your daily life. Pay some attention to them, because they are on the rise, and they can save lives.


Consumer Notice: This post is certified 100% free of Matters of Official Concern that are not referenced from publicly available sources of information.

I get it that House Oversight Committee Chairman Representative Jason Chaffetz won't have Overseas Buildings Operations Director Lydia Muniz to kick around much longer, what with her being a political appointee and therefore departing her position by January 20. But the majority staff report he released this week is "littered with unsubstantiated allegations, cherry-picked evidence, and conclusions that contradict the overwhelming evidence that we obtained," in the words of the Ranking Member from the minority side of his committee. Really, what was the big hurry that this report couldn't have waited for a review by the minority side and a vote by the whole committee?

The State Department's Assistant Secretary for Legislative Affairs asked the Committee to submit the report for an interagency classification and sensitivity review before releasing it to the public, since it "details security methods and vulnerabilities at specific embassy construction sites, provides information that could be used to identify and target classified areas and communications, describes methods used to secure classified areas, and provides information about the Department's foreign intelligence countermeasures." But did they? No.

Here's that letter from State to Chairman Chaffetz, courtesy of CBS News.

UPDATE on December 29: I see that the HOGR Committee has now, properly and responsibly, withdrawn its staff report from the public sphere. Accordingly, I've deleted the remainder of this post. In the event the Committee re-releases the report, I'll comment again at that time.

The Last Diplomat, But Almost Certainly Not The Last Time

The Wall Street Journal has an article up tonight - and in front of the pay wall - about the 2014 arrest of Robin Raphel on suspicion of espionage, the FBI's failed struggle to understand her function as a veteran diplomat and senior advisor on Pakistan, and the subsequent dismissal of all charges against her. Read it here, The Last Diplomat.

Her problems with the FBI began with this:


"Two FBI agents approached her, their faces stony. “Do you know any foreigners?” they asked."

Two years and over $100,000 in legal fees later, her legal problems were over, but her experience with law enforcement left an adverse impact on national security that will continue.


“What happened to Raphel could happen to any of us,” said Ryan Crocker, one of the State Department’s most highly decorated career ambassadors. Given the empowerment of law enforcement after 9/11 and the U.S.’s growing reliance on signals intelligence in place of diplomatic reporting, he said, “we will know less and we will be less secure.”

“Look what happened to the one person who was out talking to people,” said Dan Feldman, Raphel’s former boss at State. “Does that not become a cautionary tale?”