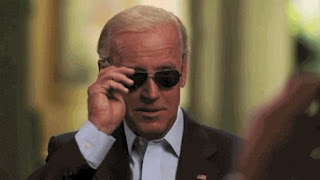 He makes it sound like he's siting on a surfboard, rocking back and forth a bit in the tide, emptying his mind, and just waiting for a wave to come and sweep him into the 2016 contest, or not.

The soul-searching could go on for quite some time yet, especially if he keeps getting press attention.

I SO Miss Marie Harf

Here's an example of why I miss her in the Spokesperson job, the September 17 daily press briefing in which the new Spokesman/person got this snarky question about our Syria program:


QUESTION: So, much has been covered. So let me ask you about the substance of the train and equip program [for Syrian rebels]. When it was launched, it aimed to train 15,000 people. Here we are months later, many months later, and you only have a handful of trained personnel. Would you say that this program has proven to be an abysmal failure and perhaps it is time to move on to something else?

QUESTION: Please use the words “abysmal failure” in your answer.


Marie would have hit that one out of the park. Oh, sure, the ex-Admiral who took her place competently defused the question by boring everybody with a long answer about the three original goals of the program, blah, blah, blah. But that's merely answering the question. Marie would have made news herself with that question, which is what I want to see in a Spokesperson.

By the way, the following day's New York Times article with a Washington dateline did indeed use the words "abysmal failure":


WASHINGTON — By any measure, President Obama’s effort to train a Syrian opposition army to fight the Islamic State on the ground has been an abysmal failure. The military acknowledged this week that just four or five American-trained fighters are actually fighting.

But the White House says it is not to blame. The finger, it says, should be pointed not at Mr. Obama but at those who pressed him to attempt training Syrian rebels in the first place — a group that, in addition to congressional Republicans, happened to include former Secretary of State Hillary Rodham Clinton.

Here's a thought: if State isn't going to use Marie for press briefings anymore, can't it please lend her to the White House to raise the level of Spokespersonery over there?

"Would YOU have a dead loved one's TATTOO put in a frame? Bizarre new service offers to remove inked skin and turn it into a memento" - UK Daily Mail


According to Save My Ink, the process allows tattoo enthusiasts to bequeath an actual part of themselves 'just like a house, wedding ring or any other cherished possession'.

Posted by TSB at 8:22 AM 1 comment:
Labels: Most Eyebrow-Raising Headline of the Week 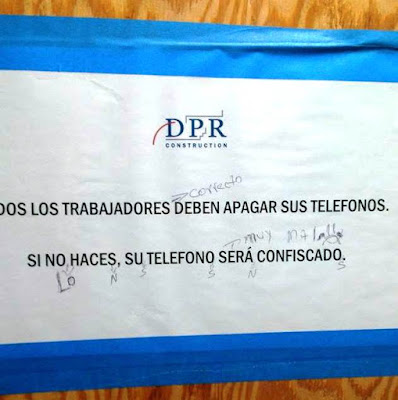 Noted in an office annex elevator.

So the company doing renovation in an office annex in Arlington, Virginia, put up a sign - which looks to be professionally printed - in the service elevator warning employees to turn off their cell phones or else have them confiscated. The warning is in Spanish, of course, that being the language of the construction trades in Arlington.

Some helpful construction guy evidently noticed the poor grammar of the warning and took it upon himself to give his bosses a free Spanish lesson. The top line he marked correcto, but he red-penciled the totally screwed-up bottom line ("si lo no hacen, sus telephonos seran confiscandos") and graded it muy mala.  He even drew a little sad face next to the mala.

That guy is wasted in construction work. Somebody should hire him as a language instructor.

In Ft. Pickett vs FLETC, Virginia Is Now First and Goal 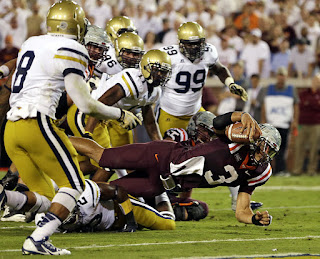 It's 44 pages and I haven't read it yet, but it starts great. The first sentence of the summary "What GAO Found" reads "GAO evaluated four Department of State (State) Bureau of Diplomatic Security (DS) requirements that GAO determined were critical in the selection of a site for a training facility and found that Fort Pickett, near Blackstone, Virginia, fully met all four while the Federal Law Enforcement Training Centers (FLETC) campus in Glynco, Georgia, did not fully meet any."

The GAO audit report that Rep. Ed Royce requested "to review the proposals put forward by the Department of Homeland Security (“DHS”) and the Department of State (“State”) to determine which proposal meets the State’s security training requirements in the most effective, efficient, and timely manner" has now been completed. According to the AP, it found that State's proposal for a training center at Ft. Pickett, Virginia, is the better choice. I say "according to the AP" because Rep. Royce is - again, according to the AP - sitting on the report and preventing its release to the public.

So, basically this development gives Virginia a first down somewhere inside Georgia's ten yard line. The question now is whether Virginia can carry the ball into the end zone before Rep. Royce interferes with the play.

Sending all the agents to Georgia instead of Virginia could cost U.S. taxpayers up to $736 million more over the next 50 years, according to the report, a copy of which was obtained by The Associated Press. It also criticized the Georgia cost estimate for not being comprehensive, fully documented, accurate or credible.

"Spending money on something that doesn't meet our requirements is not going to be a good investment," Assistant Secretary of State Gregory Starr shot back. The Georgia site, he argued, lacks facilities for the type of weapons the agents use and would force staff to travel to and from a bombing range 60 miles away.

The GAO says Fort Pickett would consolidate almost all of Diplomatic Security's training for high-threat posts, which involves firearms, driving and explosives training and is currently scattered in 11 locations over seven states. It says the base can host nighttime exercises, which staff conducts 190 days a year, whereas limitations apply in Georgia. And it says the Virginia option benefits from proximity to Washington, a requirement stemming from the post-Benghazi, Accountability Review Board's report.


The limitations of FLETC Georgia for hard-skills training are absolute physical limits, like space, proximity, and location. Its training space is too small, its proximity to populated areas is too close, and its geographic location is too far from State’s training partners. I don’t see how those limits can be wished away. So long as GAO remains an honest broker in this matter, the objective argument over where to locate FASTC is over.

That leaves the political argument, which of course will not be settled until Rep. Royce gets what he wants or is beaten by a some stronger coalition of political interests.

Virginia has its own Congressmen and Senators. Why aren't they on the field blocking Royce?