A report of explosive devices in the Tappan Zee Manor Nursing Home led to an evacuation ... the two grenades — a training hand grenade and a metal hand grenade — were removed by the county sheriff's bomb squad, who will X-Ray the devices to see if they're live grenades. 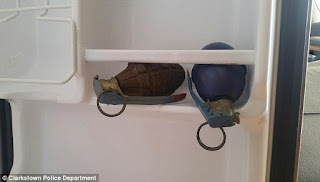 Posted by TSB at 4:08 PM 12 comments:
Labels: Most Eyebrow-Raising Headline of the Week

Have Some Fun This Afternoon 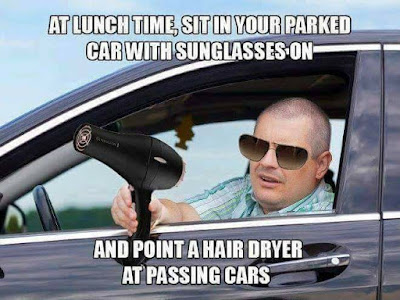 It is a lovely pre-Spring day in our National Capitol Region, so I just might do this.

There was a spate of overheated stories yesterday about personnel changes at high levels in the State Department, most of them repeating the New York Post's "bloodbath" headline, and none of which I found very interesting. But then there was this conservative website's take on the basic story (Secretary Rex Tillerson Begins Deconstructing 7th Floor “Shadow Government” at Dept of State) which went off on a weird tangent about what someone evidently imagines is the Imperial lifestyle of our own Panem on the Potomac. Here's a quote:

With first rights to the budget expenditures, the 7th floor group finds no indulgence too extravagant for their intellectual elitism. They demand nothing but the finest because they are the most worthy of the DC professionally privileged – who are more equal than others; and after all, their jobs require them to host and visit like-minded diplomats, and celebrities with exclusive tastes from around the world.


How's that again? People on this fabulous 7th floor have massive expense accounts? Maybe that's what M&IE stands for. Chartered airline travel? Does a Black Hawk count? Chauffeurs? Only in fully armored cars.

I could possibly believe all of those things, but I'm calling BS on the fabulous decor. I've been to a few meetings on the 7th floor, and I didn't see any evidence that the very best interior decorators had been involved with the place. But then, maybe they keep that decor in some fancy part of the floor where they don't allow the likes of me.

And what is that bit about having "first rights to the budget expenditures?" I'm afraid that many of my fellows citizens have no idea whatsoever of how the government works, and especially not how funds get appropriated by Congress, or even that there is a budget. There are people - voters - who really suppose that when some government big-shot wants to spend money he calls over to the Treasury and asks them to run the hundred dollar bill press for an extra hour that day while he fills up a truck.

It makes me curious where that perception comes from. From movies and television, of course, because that's where most people get all their information. But exactly which movies and TV shows?

I'm drawing a blank here, because I'm not a big consumer of pop media. Are government leaders regularly depicted as "living a life of high financed indulgence?" Do people think the Hunger Games is a documentary? When did the popular stereotype of a government office change from dreary and cheap to decadent and luxurious?

Lastly, have there been any movie or TV depictions of U.S. Embassy life that were even remotely in the ballpark of reality?

Posted by TSB at 5:44 PM 7 comments:
Labels: Department of State, The Trumpening

On January 29, two women arrived from Mongolia. Customs and Border Protection officers sent them for a routine agriculture examination. The women had a combined 42 pounds of horse meat concealed inside juice boxes. That includes 13 pounds of horse genitals that one of the women claimed were for medicinal purposes.

Posted by TSB at 6:24 AM No comments:
Labels: Most Eyebrow-Raising Headline of the Week

Yes They Can (Or At Least, They've Made a Good Start) 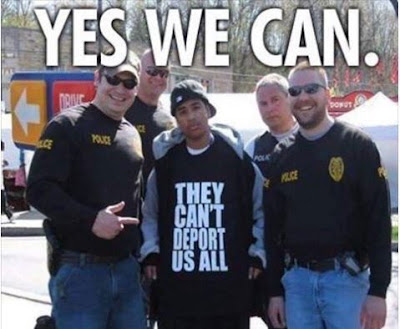 I see more and more news about this sense of dread among Federal employees, even of a Federal bureaucrat resistance movement, Alt-Gov types who are subversively undermining the Trump Administration in all sorts of ways. Like this:


But there’s another level of resistance to the new president that is less visible and potentially more troublesome to the administration: a growing wave of opposition from the federal workers charged with implementing any new president’s agenda.

Less than two weeks into Trump’s administration, federal workers are in regular consultation with recently departed Obama-era political appointees about what they can do to push back against the new president’s initiatives. Some federal employees have set up social media accounts to anonymously leak word of changes that Trump appointees are trying to make.

And a few government workers are pushing back more openly, incurring the wrath of a White House that, as press secretary Sean Spicer said this week about dissenters at the State Department, sends a clear message that they “should either get with the program, or they can go.”


Getting with the program may be a problem for some of my fellow feds, but I know of at least one group of civil servants who are unquestionably WITH the program, and that's the nation's Border Patrol and Immigration Agents. Their employee unions put out a joint press release to state just how enthusiastically they are on the Trump Train:


As representatives of the nation’s Frontline immigration officers and agents responsible for enforcing our laws and protecting our borders, we fully support and appreciate President Trump’s swift and decisive action to keep the American people safe and allow law enforcement to do its job. We applaud the three executive orders he has issued to date, and are confident they will make America safer and more prosperous. Morale amongst our agents and officers has increased exponentially since the signing of the orders. The men and women of ICE and Border Patrol will work tirelessly to keep criminals, terrorists, and public safety threats out of this country, which remains the number one target in the world – and President Trump’s actions now empower us to fulfill this life saving mission, and it will indeed save thousands of lives and billions of dollars.


Supportive, appreciative, confident, and of exponentially improved morale. The working levels of the Border Patrol and ICE sound like they could not possibly be more happy with the change in administrations. This week's surge of immigration raids - or routine enforcement actions, if you like - seems to be proof of that.

Posted by TSB at 7:18 PM 4 comments:
Labels: The Trumpening

"It's an Aesthetic Perimeter" 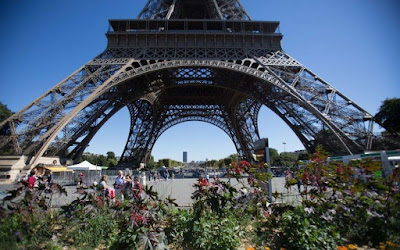 “It’s not a wall, it’s an aesthetic perimeter” in the words of Paris' deputy mayor.
I'll have to remember that one.

According to the French daily Le Parisien, this charmingly named security countermeasure will be eight feet high and made of bulletproof glass. So then, imagine a big ballistic sneeze guard surrounding the Champ de Mars.

Visitors will have to go through airport-type security screening to get into the public spaces around the Eiffel Tower. A little strange-looking, maybe, but entirely reasonable given the frequency and ferocity of terrorist attacks on public places that France has experienced in the last two years. Expect similar aesthetics to spring up around other public attractions in Paris and other European cities soon.

Most Eyebrow-Raising Headline of the Week (Late Entry Winner)

Somali-American chef Jamal Hashi in Minneapolis started offering the "The Hashi Burger" at Safari Express, and began ordering a pallet of meat every few months — each of which arrived from, of all places, central Australia, where meat camels were slaughtered according to halal standards, then shipped to places like Dubai, home to camel hot dogs and the world's first camel-milk chocolate company, and Minnesota.