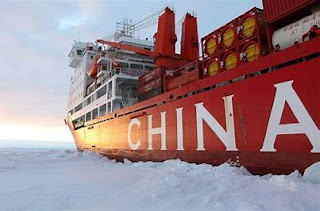 The Department is looking for a Chief of Mission who can handle cold temps and long, dark, winters.
Establishing an Ambassador-at-Large for the Arctic Region:

The Ambassador-at-Large for the Arctic Region will advance U.S. policy in the Arctic, engage with counterparts in Arctic and non-Arctic nations as well as Indigenous groups, and work closely with domestic stakeholders, including state, local, and Tribal governments, businesses, academic institutions, non-profit organizations, other federal government agencies and Congress. The United States remains committed to constructive cooperation in the Arctic, foremost through the Arctic Council, and the Ambassador-at-Large will work in close partnership with the U.S. Senior Arctic Official, the federal Arctic science community, and the Arctic Executive Steering Committee.

We look forward to continuing our strong partnership with the Congress to swiftly confirm the Ambassador-at-Large, once a nomination is sent to the Senate.

For once, wealthy Donor-Ambassadors will not elbow their way to the front of the line.
I'd get in line for that job myself, since I've always wanted to go to the artic. I already have a good down jacket, and I think that my old magnetic compass will work above the artic circle.
At a minimum I could TDY-it to that new mission. If they need a frozen Fortress Embassy there I'll be right on it.
Posted by TSB at 1:38 PM No comments:
Labels: Department of State

Statement from the Foreign Secretary on the third anniversary of Harry Dunn's death pic.twitter.com/lsQSFWNVGj

The GB News story was typical of UK media this weekend, that is, lots of calls for "justice" but no details about what that would mean, exactly.
Oddly, the family did not show up in any news media interview or public event. Their spokesman was reduced to retweeting news articles on the anniversary observance and inviting supporters to light cyber candles.
The only concrete action was taken by a small group of bikers - hardly more than a dozen, judging from photos - who parked their bikes in a pedestrian garden in the vicinity of U.S. Embassy London and ran their engines and horns for one minute.
So, take that, Uncle Sam! (Assuming, of course, that whoever was present in the embassy on a Saturday morning could hear anything through the blast-resistant windows of the building.) Know that those protestors promise to be back for another minute next year, and every year, and be properly chastised.
Posted by TSB at 8:50 AM No comments:
Labels: Harry Dunn

If You Can't Get Hungover in Moscow, Where Can You?

See the purported video from Embassy Moscow: here.
Okay, he doesn't look like he would be in shape to drive. But give him a break, it was 5:18 in the AM!
Posted by TSB at 11:48 AM 3 comments:
Labels: U.S. Embassy Moscow

24 years ago today, two bombs exploded in front of U.S. embassies in #Kenya & #Tanzania, leaving more than 200 dead and 5,000 injured. A sobering reminder of the dangers our #diplomats face working on the front lines of international affairs. #ForeignService pic.twitter.com/gEL6VQozx5