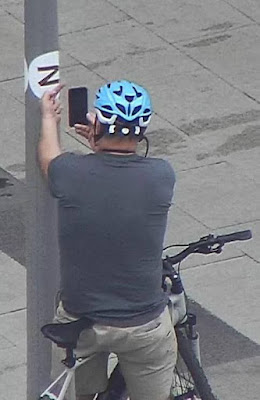 Purportedly, this was a U.S. military attache in Moscow (source).
If so, then I can only quote Zed from Men in Black: "Gentlemen, congratulations. You're everything we've come to expect from years of government training."
Posted by TSB at 11:27 AM 4 comments:

Yes, that's our Julian Assange update theme, in honor of the whitest-skinned person to ever come from Australia.
He's in the news today because the UK Home Office has affirmed the U.S. extradition order that was upheld by the UK High Court in December.
Assange has spent the last three years fighting extradition from Belmarsh Prison, where the UK authorities put him due to his habit of skipping bail. Before that he spent seven years in the embassy of Ecuador hiding from Swedish authorities who wanted to investgate him on complaints of rape and sexual assault. Now, he has 14 days to appeal the Home Office decision, which of course he will. Depending on how that goes, he'll next appeal to a European human rights court.
How much longer can he possibly delay his delivery to American justice? Almost indefinitely, I think. At least, he seems in no hurry to leave his life behind the walls, having spent the last ten of his fifty years in what is basically self-imposed confinement.
Assange is an Australian citizen, improbable as that might seem given his extreme pallor, and he seems to have a supporter in his Foreign Office. As CNN reports:

On Friday, Australia's Foreign Office issued a statement noting the UK decision to extradite Assange, who is an Australian citizen, adding: "We will continue to convey our expectations that Mr Assange is entitled to due process, humane and fair treatment, access to proper medical care, and access to his legal team."

Of course, he can get all that stuff in a U.S. prison. And due process? Assange has gotten exremely undue process, if you ask me. I mean, he's spent ten years fighting a reckoning in a U.S. court that would likely result in a sentence of far less than that. Besides which, he would be able to do that time in an Australian prison thanks to a bilateral agreement.
What the hell, Assange? Would you rather spend the next ten years in Belmarsh than face the music in a U.S. court and get it over with?
Posted by TSB at 2:02 PM 4 comments:
Labels: Julian Assange, Wikileaks

C'mon, man! I wish the White House press office would stop the malarkey.
The new Assistant to the President and White House Press Secretary Karine Jean-Pierre told CBS News' Ed OKeefe that she just plain didn't know what he meant when he asked her about President Biden's fanciful claim that he had been appointed to the Naval Academy in 1965.
She "did not hear that part of the speech ... I need to read it myself, and just go back and see what you're talking about exactly. I can't speak to it right now."
That anecdote of Biden's was the very first thing he said in his remarks to the graduating class at Annapolis, as you can read for yourself in the transcript put out by Jean-Pierre's very own press office on May 29th.
I only hope that, somewhere, Marie Harf is warming up to take over the press office. Biden needs some competent help there as he heads into the mid-term elections.
Posted by TSB at 9:07 AM 9 comments:
Labels: C'mon Man!©, Joe Biden, Marie Harf
Newer Posts Older Posts Home
Subscribe to: Posts (Atom)