The greatest trick the devil ever pulled was convincing the world he drove a Camry.

Posted by TSB at 10:50 AM 12 comments:
Labels: Most Eyebrow-Raising Headline of the Week

Mitt Romney as Trump's SecState? Seems bizarre, but that oddest of political couples is going to meet tomorrow at Trump's New Jersey golf resort, so we shall see.


By contrast [with Trump's choices for National Security Advisor and Attorney General], choosing Mitt Romney as secretary of State would send a signal of reassurance and resolve to our allies abroad, and would be welcomed by many Republicans as well as Democrats in the Senate and House. Romney would be one of the most highly qualified candidates for any seat in the Cabinet of any president, and would be particularly valuable for America during the presidency of Donald Trump because of his knowledge of the world, experience and policy depth.


But Donald Trump and Mitt Romney?!

Weekends in New York With The Donald 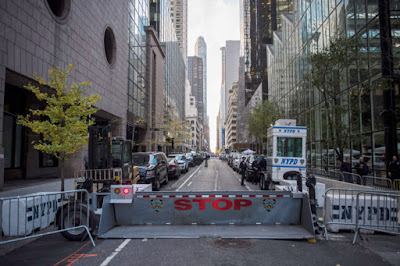 New York Magazine frets that President Donald Trump might spend weekends in his NYC home, which would bring White House-levels of security to that stretch of Fifth Avenue. "If President Trump really uses Trump Tower as his regular getaway from the burdens of the Oval Office ... The man in the high castle will have turned a public thoroughfare into a glowering moat."

I think their language is overwrought - militarization?? - however, there is certainly a real adverse impact on public spaces when such a large security footprint is imposed on a congested city.


Fifth Avenue in the 50s is almost always clotted with pedestrians and cars, and this time of year it becomes even more congested as department stores turn their windows into Christmas Barneys-, Saks-, and Dior-amas. But Trump’s election has turned his stretch of Fifth into the urban equivalent of the security line at JFK: Aluminum barriers squeeze traffic into a pair of lanes, sidewalks are blocked off, and pedestrians shuffle past a gauntlet of armed officers.

We’ve seen it so often: Jersey barriers and modular fences, automatic weapons slung across Kevlar vests — the whole visible apparatus of control and intimidation in the name of safety.

Ever since 9/11, architects and planners have looked for more genial ways to minimize potential threats: cameras, of course, but also bollards that look like charming street furniture [TSB Note: They really do! Please click the link.] and public structures that are tougher than they appear. Even so, militarizing the streets has become the option of first resort, establishing a presence that’s as frail as it is aggressive. Paris has been bristling with security forces since the Charlie Hebdo attacks — which didn’t prevent the calamity of the Bataclan less than a year later. The 85,000 soldiers who kept Rio de Janeiro quiescent during the Olympics retreated after the crowds went home — and the military soon found itself in a shooting war with resurgent gangs. Blatant security works like a burglar alarm sticker on a front door: It announces to aspiring evildoers that they’ll do better down the block. And shooters tend to take that advice, attacking cafés, movie theaters, offices, elementary schools, and relatively unguarded streets rather than the fortified “targets” identified by consultants like, say, Rudolph Giuliani.


It's enough to make you appreciate Camp David. Maybe Trump will give Fifth Avenue shoppers a break and take up fly-fishing in the Catoctin Mountain streams, like Hoover and Eisenhower did. But, then, I really don't see him as the fly-fishing type.

Donald Trump (if that really is his name), Born in Pakistan?


Not that I think for one minute that President-Elect Trump was born in Pakistan, as this report from Neo News has it, but then, it might explain the burst of local pride in Peshawar this week.

Maybe Trump's real name was Dawood Ibrahim Khan, orphaned in Waziristan in 1954, taken to London by a kindly British Army officer, and then adopted by the Trump family a year later.

I mean, that could kind of happen, I suppose.

Brexit? This Was the Hexit 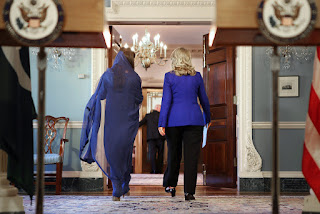 And so we say goodbye to Hillary Rodham Clinton. To Bill, too, I think, since the country seems to have reached Peak Clinton. Where will they go? Once, they might have retired to run the Clinton Foundation in their golden years, but now, the Trump administration may well appoint a Special Prosecutor who would spoil that fun.

I really hadn't expected a Trump administration, but we'll have one just 72 days from now. Which makes we wonder: who will he appoint as Secretary of State? Senator Bob Corker is absolutely begging for the job. I guess he'd be better than John Bolton or Newt Gingrich, but I dislike Senators and Congressmen as a rule. Surprise us, President Trump!

The Foreign Service might just be pleasantly surprised by Trump's Ambassadorial appointments. Since he lacks the usual big money donors and money bundlers, will he appoint mainly from the professional ranks? Let's hope so.

Oh, and who will be Trump's Director of the Bureau of Overseas Buildings Operations? I assume he'll take a personal interest in that job. Believe me, our new POTUS is someone who knows how to build the biggest, classiest, and most totally secure embassies in the world, which by the way, is a very tricky thing to do, that I will tell you. Might OBO be run by some construction world crony of Trump's? Yes, please!