From the the Daily Mail we learn the latest twist in the Harry Dunn story:

The Crown Prosecution Service has told Harry Dunn's parents it will continue to pursue the prosecution of their son's alleged killer, despite the High Court ruling she had diplomatic immunity.
-- snip --
Chief Crown Prosecutor for the East Midlands, Janine Smith, wrote to the 19-year-old motorcyclist's family just before the anniversary of the CPS's charging decision, to say she was 'satisfied that there remains sufficient evidence for a realistic prospect of conviction.'
The family had contested the diplomatic immunity asserted on behalf of the suspect, but High Court judges accepted the Foreign Office's position that Sacoolas 'enjoyed immunity from UK criminal jurisdiction'. In Ms Smith's letter to Mrs Charles and Mr Dunn she said: 'I wanted to take the opportunity to provide an update following our consideration of the recent High Court judgment.
'Having considered the judgment, and notwithstanding the outcome in respect of diplomatic immunity, I am satisfied that there remains sufficient evidence for a realistic prospect of conviction and that it remains in the public interest for the prosecution to continue.
'The CPS remains of the view that Mrs Sacoolas should return to the UK to stand trial.
'I do hope this confirmation is of some small comfort to Harry's family and friends at this challenging time of the year.'

Evidently Ms. Janine Smith, Chief Crown Prosecutor for the East Midlands, believes the best way she can be of some small comfort to the Dunn family and friends at this challenging time of year is to keep alive their false hope that, someday, maybe far in the future, there will be an extradition and prosecution of the American driver despite that driver’s immunity to the criminal jurisdiction of the UK.
That is, frankly, an abomination.
If the officials of the Crown Prosecution Service for the East Midlands cannot summon up the moral courage to speak simple fact to the family – such as the fact that diplomatic immunity is an absolute bar to extradition short of a waiver by the U.S. Secretary of State, and that is something which the U.S. has never granted in such cases – then it would be better for them to say nothing.
Step back from this ill-advised servicing of the family’s sentiments, Ms. Smith. Return to your daily business of keeping the public safe from offensive tweets and such, and leave it to the family’s spokesman to do the damage.
Posted by TSB at 4:46 PM 15 comments:
Labels: Harry Dunn


Former Mafioso and confessed murderer of 19 (that he admits to - bada-bing!) Sammy 'The Bull' Gravono has pulled the trigger on a podcast about his life of organized crime.
Have an espresso and stir up some tomato sauce with sauted onion, garlic, and olive oil while you make your bones on this cold piece of anti-social media at: Our Thing podcast.

Posted by TSB at 9:59 AM 3 comments:
Labels: Most Head Shakingly Bad Thing of the Week

Watch the Sky For Secret Signals Over RAF Croughton 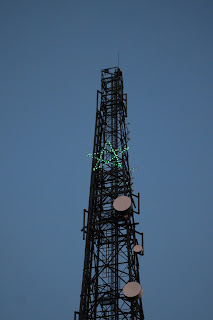 Well, it's finally come to this. The Dunn family's favorite charlatan is out of threats and arguments and is reduced to imagining secret signals in the sky over RAF Croughton.
Check out this tweet:

We’ve always known that the good people of the 422nd Air Base Group at RAF Croughton have been on our side. The mast at the base lit up tonight in Kawasaki green in support of #justice4harry. Thank you so much guys from the bottom of our hearts for that lovely touch.

What is this? Have those (previously) evil Americans at RAF Croughton flashed a coded signal in the night straight from the covert heart of the U.S. military-intelligence complex to the supporters of Harry Dunn's family?
Uh, not so fast. That lovely touch is, in fact, just RAF Croughton's annual star lighting. It is done every December, and it is in support of nothing except raising “holiday cheer for the community and local village.”
Come on, man!© Just go to RAF Croughton's Facebook page if you want to know why that star is there:

#Pathfinders Light the Way!
Posted by TSB at 6:37 AM 10 comments:
Labels: Harry Dunn


Adolf Hitler Wins Election in Namibia, Has No Plans for World Domination - Newsweek

Adolf Hitler Uunona has been elected with 85 percent of the vote for a seat on the regional council in the former German colony, where street names, people and places still have German names ... He told German tabloid paper Bild: "My father named me after this man. He probably didn't understand what Adolf Hitler stood for. As a child I saw it as a totally normal name. Only as a teenager did I understand that this man wanted to conquer the whole world."

He appears on the election nomination list as Adolf H. Uunona. He won the seat on the ticket of the ruling SWAPO party which has ruled Namibia since independence from apartheid South Africa in 1990.