Fear and Trembling in DC

It could be just a coincidence, but this storm passed through Washington DC right after the FBI obtained a search warrant for Huma Abedin's home computer.

The Further Adventures of Carlos Danger 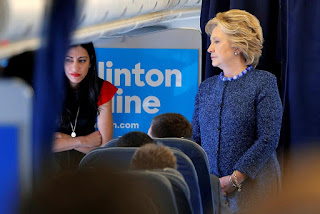 From the New York Times, New Emails in Clinton Case Came From Devices Once Used by Anthony Weiner:


WASHINGTON — Federal law enforcement officials said Friday that the new emails uncovered in the closed investigation into Hillary Clinton’s use of a private email server were discovered after the F.B.I. seized electronic devices belonging to Huma Abedin, a top aide to Mrs. Clinton, and her husband, Anthony Weiner.

The F.B.I. is investigating illicit text messages that Mr. Weiner sent to a 15-year-old girl in North Carolina. The bureau told Congress on Friday that it had uncovered new emails related to the Clinton case — one federal official said they numbered in the thousands — potentially reigniting an issue that has weighed on the presidential campaign and offering a lifeline to Donald J. Trump less than two weeks before the election.

So there we are. It is pure Greek tragedy, all about fate and character. Two women fated to tragedy by two men who won’t keep their dicks in their pants.

Bryan Police said Miranda Kay Rader, 19, was sending nude photos to her boyfriend through the social media app Snapchat on the 2500 block of E. Villa Maria. According to the officer whose car Rader hit, Rader was attempting to put on a black blouse when the officer approached her. The officer said Rader also had an open bottle of wine in her center console cup holder.

Posted by TSB at 3:36 PM 2 comments:
Labels: Most Eyebrow-Raising Headline of the Week 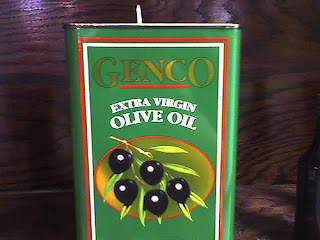 The WaPo finally took notice of the thousands of Podesta emails that have been pushed out by WikiLeaks and did a story today about the money-making machine that is Teneo Holdings, the "C-suite advisory firm and investment banking platform" created by his one-time White House aide, Douglas Band. Read it here, Inside Bill Clinton Inc:


Band, who grew close to Bill Clinton two decades ago as his personal aide in the White House and became the architect of his post-presidential activities, argued in the memo that he and his firm had benefited the former president and his foundation.

“We have dedicated ourselves to helping the President secure and engage in for-profit activities,” Band wrote. He also said he had “sought to leverage my activities, including my partner role at Teneo, to support and to raise funds for the foundation.”

Band’s memo provided data showing how much money each of Teneo’s 20 clients at the time had given to the Clinton Foundation, how much they had paid Bill Clinton and, in some cases, how he or Kelly had personally forged the relationships that resulted in the payments.

Band wrote that Teneo partners had raised in excess of $8 million for the foundation and $3 million in paid speaking fees for Bill Clinton. He said he had secured contracts for the former president that would pay out $66 million over the subsequent nine years if the deals remained in place.


Teneo Holdings ... the name is a bit redundant, since teneo is the Latin verb for to hold. Band might as well have named it the Genco Olive Oil Company, since it seems to play the same role for Clinton Inc that Genco did for the Corelone family.

Give the Hackers a Hand 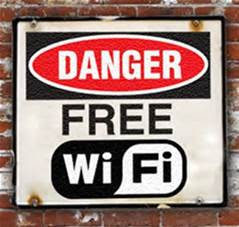 So John Podesta used a public wi-fi system on AMTRAK (see Re: My John.podesta account) to do his business with the clinton.com world?

I'm starting to suspect it did not really take Russian super-hackers to get the podesta emails that Wikileaks is pushing out. His poor security practices alone can account for that.

My good friends in the Bureau of Overseas Buildings Operations have opened another new U.S. embassy, this one in Paramaribo. It was designed by ZGF Architects and built by general construction contractor BL Harbert International, has 5,348 gross square meters of space, and cost $164 million.


As a symbol of our enduring relationship with Suriname, Under Secretary for Management Patrick F. Kennedy, U.S. Ambassador Edwin R. Nolan, and the Bureau of Overseas Buildings Operations (OBO) Principal Deputy Director William Moser, alongside local officials, dedicated the new U.S. Embassy in Paramaribo on October 5.

The multi-building complex, on an 8-acre site in the Morgenstond development, includes a chancery, support buildings, and facilities for the Embassy community. The new complex will provide embassy employees with a safe, secure, and sustainable workplace.

Since 1999, as part of the Department’s Capital Security Construction Program, OBO has completed 133 new diplomatic facilities and has an additional 53 projects in design or under construction.


Did I read that last part correctly? OBO has 53 more projects currently in design or under construction? Maybe they mean under planning, design, or construction. But no matter. By placing 133 U.S. diplomatic missions in "safe, secure, and sustainable" new office buildings, and to have even low double digits more in some phase of replacement, means that OBO has turned a very significant corner. When you include the 22 new embassies that were built in the Inman program era, it means that, for the first time ever, a majority of our missions are now in Fortress Embassies. The norm for U.S. diplomatic facilities is now a Fortress, for better or worse.

How many U.S. diplomatic missions are there? If you use the most expansive list available, there are 294 of them, but that includes missions to international organizations. It's more like 274 if you count just the bilateral missions. Whichever number you use, more than half of them are in Fortresses.

That is a big, big, change from the situation at the time of the East Africa embassies bombings, when nearly all of our missions were highly vulnerable to attack. Those bombings prompted Congress to provide a continuing program of capital funding for new embassy construction. Unlike in the Inman '80s, when the steam ran out of Congress's interest in embassy security after a few years, this time they were as good as their word. So, yea for Congress!


There's the old embassy in Paramaribo, all flimsy ticky-tack and too close to the street. Not safe, secure, or sustainable. Or even especially functional. Good riddance.

Here's a travel tip. The city of Paramaribo is way more enjoyable than I would have guessed. The Dutch colonial influence and a lot of history make up for the miserable climate. Should you visit, be sure to take a trip out of town to see Joden Savanne, a World Heritage site located in the jungle but only a moderate drive outside the city. Starting in the 1630s, Sephardi Jews from the Netherlands, Portugal, and Italy attempted to resettle in part of Dutch Guiana and create a plantation economy along the Suriname River. It was one of the earliest attempts at European settlement in South America, and one of the few by a group fleeing persecution. It was ultimately unsuccessful, but the ruins of Joden Savanne's synagogue and cemetery have been preserved. Highly recommended.

Perfect Casting for the Remake of Miss Bala 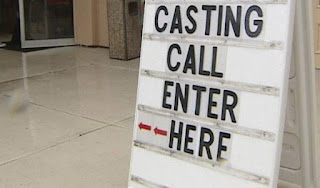 One of the more interesting and unlikely characters to emerge in the 2016 Presidential election is the one-time Miss Universe and now Hillary voter Alicia Machado. If Machado has an agent, and I'm sure she does, I hope he or she is pitching her for the Sony Pictures remake of Miss Bala.

Miss Bala was a terrific independent Mexican picture from 2011 which was inspired by the true story of a Mexican beauty queen who became hooked up with a drug cartel boss. Machado seems perfect for the role if you credit the details in this CBS commentary on the curious case of Alicia Machado:


[T]there is little mention of how a Venezuelan judge once alleged on live TV that Machado had threatened to kill him. Or how the Mexican attorney general’s office later said she was the girlfriend of a major narco trafficker, and that she he had a child with him, according to Univision and other outlets. Or how a government witness who reportedly testified about their affair was later shot to death.

That Univision story (here) is from 2010, so it predates the emergence of Machado as a figure in the gringo election. CNN Latino also named her around then in a story about celebrities running with drug bosses. In fairness, Machado has kinda-sorta denied that her child was fathered by this guy, whom the U.S. State Department described as "a key member of the [Arturo Beltran-Leyva] drug trafficking organization ... [who] coordinated the movement of illegal narcotics into the United States and oversees the repatriation of narcotics-related proceeds" when it offered a $2 million reward for his capture.

So, what's the truth? If you google it, you can find a Miami city document - which has not been validated so far as I know - establishing the child's domicile in Miami and listing a patronymic that agrees with the name of the drug boss. There was no DNA test conducted - so far as I know - when Alicia Machado filed for U.S. citizenship for herself and her daughter, despite the legal implications of the Kingpin Act which prohibits U.S. persons, such as the then legal permanent resident Alicia Machado, from “engaging in any transaction or dealing in property or interests in property of [specially designated narcotics trafficker]s and from engaging in any transaction that evades or avoids the prohibitions of the Kingpin Act." The purported baby daddy was listed as a Kingpin by the U.S. Treasury Department in 2008. If Machado had any financial transactions with him, and I'm not saying she did, should that have prevented her from receiving U.S. citizenship this year? I don't know.

But, back to Miss Bala. It was an innovative movie about the horrible situation in Mexico today, shown entirely from the point of view of a naif waif would-be beauty queen who is snatched up by narcos. If even half of what criminal justice officials in Venezuela and Mexico have alleged is true, then Alicia Machado can understand that character.

The real-life incident that inspired the movie was reported by the WaPo in 2008: Busted: Mexico's Miss Sinaloa and the 7 Narcos. 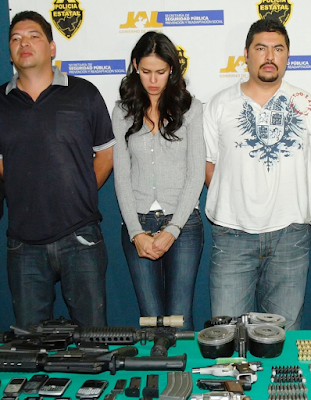 That's Miss Sinaloa, skinny jeans and all, along with some of the seven suspected narco traffickers, $53,000 in cash, two AR-15 rifles, three handguns, 633 rounds of ammo, and 16 cellphones which were in the truck with her when Mexican police arrested her in 2008. 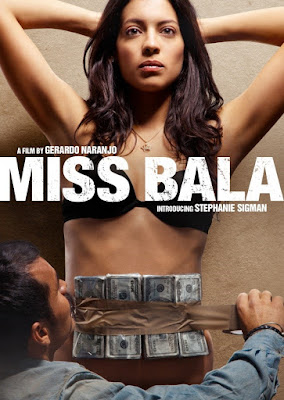 And that's the movie poster for Miss Bala, in a scene depicting a narco boss using her to repatriate narcotics-related proceeds smuggle his cash back into Mexico.

Alicia Machado, you were made for that role.

Trump And The Testosterone Takeover Of 2016 - NPR Politics

Posted by TSB at 11:20 AM 4 comments:
Labels: Most Eyebrow-Raising Headline of the Week
Newer Posts Older Posts Home
Subscribe to: Posts (Atom)