U.S. Embassy in Mexico City Annexes a Street (For Mexico's Own Good) 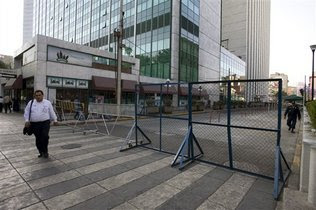 Passport, the Foreign Policy magazine blog, has a story today on the ruckus the Major of Mexico City is kicking up over the U.S. embassy's practice of blocking access to a public street that adjoins the embassy property: Has the U.S. annexed a Mexico City street?

Mayor Marcelo Ebrard ... has taken up the cause of reopening Rio Danubio, a narrow one-way street off Paseo de la Reforma, the capital's main promenade modeled after the Champs-Elysees in Paris.

"The Embassy has not had, nor does it have, authorization to occupy public spaces," Ebrard told reporters. "They shouldn't be the ones who occupy the city with the aim of providing security."

Passport links to this story from the Miami Herald, which provided the above photo.

His Honor the Mayor may or may not know why the practice of blocking access to Rio Danubio started, since it goes way back to 1986, but it was, in fact, for the purpose of providing better security to the visa applicants who line up outside the embassy.

The section of Rio Danubio in question is a one-block stretch that runs between the embassy office building and the Marie Isabel Sheraton hotel. (In the photo, the embassy is just out of view on the right; the Sheraton is the building on the left.) In 1986, the embassy's consular section was located in a lower level of the embassy office building and visa applicants queued up along Rio Danubio to be admitted into the embassy, one small group at a time, via a side entrance that was roughly in the middle of the block. The street had a fair volume of vehicle traffic, some of it associated with a side entrance into the Sheraton, and it was not unusual for cars to be parked there.

In May 1986 a group calling itself the Commando Internacionalista Simon Bolivar parked a carbomb on Rio Danubio next to the hotel's side entrance. That put the bomb directly opposite the routine daily queue of visa applicants; clearly, it was an attempt to cause mass casualties. Fortunately, the bomb was discovered and rendered safe by the police (if I recall correctly, the bomb's crude homemade timer had failed), so no one was injured.

To protect against another such attack the U.S. Ambassador at the time, John Gavin, insisted that the local authorities allow the embassy to take control of Rio Danubio. They refused, until Ambassador Gavin applied pressure by shutting down all visa processing in Mexico City, after which they caved in pretty quickly.

Another Ambassador might not get away with shutting down visa processing - Gavin was an old Hollywood friend of President Reagan's, and he seemed serenely assured that he would remain Ambassador for so long as he wished no matter what kind of protests the government of Mexico and its allies in the U.S. made to the Secretary of State - but it's an option worth considering in case Mayor Marcelo Ebrard gets out of hand.
Posted by TSB at 9:52 AM
Labels: Carbomb, John Gavin, U.S. Embassy Mexico City

You mean it wasn't just an imperialist land grab?

I've quoted you and linked to you here: http://consul-at-arms2.blogspot.com/2009/04/re-us-embassy-in-mexico-city-annexes.html

According to the current Mayor, it was the moral equivalent of the treaty of Treaty of Guadalupe Hidalgo.