The Singular Case of the Unsecured Stationery 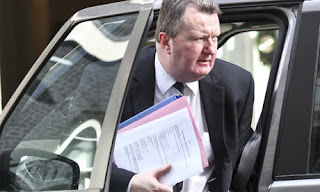 Pardon me, Assistant Commissioner Quick of Scotland Yard, but what's that document you're reading? The uncovered official-looking one you were holding when you were photographed getting out of Her Majesty's Sport Utility Vehicle, or whatever the British name may be for what we in Washington call a "G-Ride?" You know, that document about which it can be said without violating security that it appears to have the word "SECRET" printed in the header? Oops!

So much fuss could have been avoided by simply using one of Her Majesty's Classified Cover Sheets.

Ex-Commissioner Quick's overly casual reading habits bring back wonderful memories of a similar incident that occurred in Washington during the Cold War year of 1987. The February edition of the Foreign Service Journal featured an interview with Under Secretary of State for Management Ronald Spiers accompanied by a cover photo of the Under Secretary siting at his desk perusing an open copy of the National Intelligence Daily, a highly classified intelligence community publication. FSJ readers were quick to point out that, if you held the magazine upside down, you could read part of a Top Secret report about the situation in Lebanon.

Congress was not amused, what with U/S Spier's slip-up coming on the heels of many - actually serious - episodes of security laxity on the part of the State Department in 1986-87. Most others were very amused.
Posted by TSB at 8:05 PM
Labels: Classified Documents, Ronald Spiers, Security Violation