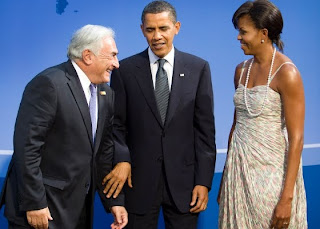 Miss Kiss, whose real name is Michelle Conti, claims to have met the former head of the International Monetary Fund on several occasions in a private club in Paris four or five years ago.

She said she decided to speak out in his defence because he was being treated "worse than an assassin" over allegations that he tried to rape a chamber maid in a New York City hotel.

Miss Kiss, the star of numerous pornographic films, said she nicknamed the French economist "Genghis Khan", without explaining why.

[TSB note: Perhaps she named him that because DSK, like Genghis Khan, raided and plundered the peoples he invaded?]

She claimed that he had sexual relations with her and a second woman and that he came to the unnamed nightclub three or four times.

She watched him approach several other women at the club but said he was rebuffed.

The fact that he took the refusals with good humour and politeness convinced her that he was "a gentleman", she told Corriere della Sera.

"He was very nice. He wasn't a randy old man or hungry for women as he has been depicted.

"He was very kind, educated, he didn't behave like a drooling dog as can often happen (with other men). He treated us with kindness, he cuddled me. I know men, and he was not the violent type."

Miss Kiss said she thought the former IMF chief had no need to rape a woman because he could afford to pay for escorts like her. "He's just a playboy, that's all".

Asked if he would like to comment on the actress's allegation, William Taylor, Mr Strauss-Kahn's attorney, said: "No thanks".

Oh, come on, Mr. Attorney, don't turn up your nose at this character witness. Your client needs all the help he can get at this point.
Posted by TSB at 5:43 PM
Labels: Dominique Strauss-Kahn

TSB:During the past 11 years, only $16 million tied to suspected Mexican traffickers has been blocked in the United States, or one dollar for every $20,000 estimated by the Congressional Research Service to flow southward from the United States to organized-crime groups in Mexico each year. THAT TRANSLATES TO $30 BILLION/YR AVG GOING FROM US TO MEXICO. Mexican exports to Europe and elsewhere are another (big) matter. gwb

WHAT THE H? TSB! The new State spokesperson is a highly competent and experienced NEOCON?? It looks like we are getting ready to answer lots of questions about NATO KMA!
gwb

Yeah, it looks like she is (or anyway her husband is) a NeoCon foreign policy type. It cracks me up to hear complaints about her coming from the same Foreign Service people who always defend the nonpartisan professional loyalty of liberal Democrats under Republican administrations.

TSB: She is just the person for our new GCC strategy. I had to read Pepe Escobar today (ATimes) to get it. quote:Neo-colonial NATO and monarchic/theocratic GCC is a match made in weapons contractor heaven. The GCC will be incorporated into the global US missile shield system. Soon, there'll be that juicy $60 billion weapons deal with Saudi Arabia - the largest in American history. gwb

Great story of the AQ raid on the Karachi Naval Base.
Al-Qaeda had warned of Pakistan strike
By Syed Saleem Shahzad