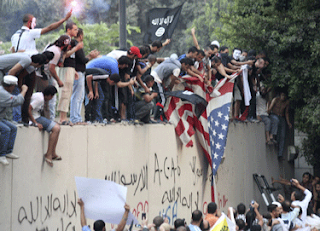 Your post has peaked my curiousity. My latest (and hopefully last) work incarnation is running the field operations of a demolition company. Though I do not use mob violence as a project technique, there are several general contractors who believe quite differently. "Tunis, Khartoum, Sanaa, Cairo, Chennai, Jakarta, Islamabad, Lahore, etc, quite exotic. Careful though you could sent to reall dangerous places (Gary, Ind. Johnstown etc).

No TSB, nothing new here. The NFL ratings are thru the roof with the introduction of amateur refs. Now every team is a contender and every game a thriller! In last night's game even the refs sought refuge in the locker room before the game was over!gwb
http://www.jsonline.com/sports/packers/171055661.html

I'm glad to hear nothing much has changed!

Mob violence as a demolition technique? Well, the crew would work cheap, but they have a tendency to set fires that get out of control.

"Well, the crew would work cheap" Quite right, but as you astutely pointed there are drawbacks. Job site safety meetings and coordination with other trades becomes somewhat problematic. It also adds a another dimension to critical path method of scheduling.

TSB: When you harbor the FBI's most wanted for 16 years you can bet they will throw the book at you!.. (of course that would be wrong.) gwb
http://www.nypost.com/p/news/national/bulger_ggal_pal_pays_fine_FIBB8bROirrgMS5xl2DhdK

http://www.bloomberg.com/news/2012-09-26/chinese-national-charged-with-carbon-fiber-export-scheme.html
TSB:How does this guy rate a top secret clearance? Does it look like L-3 Communications is a little sloppy with the latest technology? gwb

TSB: Tnx to our rogue state blogger
Van Buren we have some clues that Benghazi was an attack on the CIA guys there. And Tomdisptach has a great summary of the tragedy of the Obama FP legacy: "The Managers"
who's job was to manage the Bush Legacy. gwb

TSB: Assange has been assigned the same category as US Military's most wanted. Do you think Obama has signed the order yet? gwb

GWB: Van Buren is a little confused over the details of guard contracting in Libya, but otherwise, I have to agree with him.

The Chinese carbon fiber caper is kind of odd, but I take it the crime involved violating export control laws instead of technology theft. And the kind of material the ChiComs were buying from L3's oriental gentleman is normally made by a Japanese company, according to the story I read. Maybe the ChiComs were looking for a bargain by shopping in the USA.

TSB: Here is your "eye roller" of the week. If you have a shot of Colin Powell rolling his eyes it would go good with this. gwb

GWB: I like the intensity in Bibi's stare! Eye of the Tiger.