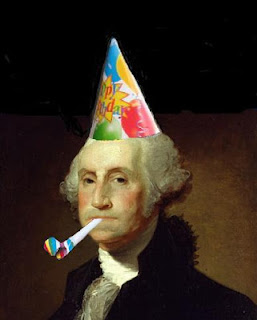 Happy Washington's Birthday, as the federal holiday that was established for this day by law is officially known (and not so-called 'President's Day,' thank you very much), and which this year falls four days ahead of George Washington's actual birthday on February 22.

The federal government does not commemorate the birthday of our first President on the anniversary of his birth because Congress, back in 1968, fixed most federal holidays on Mondays. They did that in order to increase government efficiency create three-day weekends and reduce administrative expenses inspire government employees to take leave on Federal Fridays.

Okay. I appreciate having a Monday off as much as the next federal worker. But I still plan to commemorate the occasion with a cannon salute on the 22nd, the way Americans did it back in the day. I would go totally Old School and add a bonfire and fire works, except that would be asking too much of the watered-down modern day patriotism of my local Fairfax County authorities.

I'm with you TSB. This watered down "they're all great" Presidents Day is baloney. Our new Sec State is off to a bold start visiting with Afghan child musicians and saying the Syrians will have to just work it out themselves through negotiations, which will be difficult. At least he is the richest and most languid Sec State we could find. gwb

Oh man TSB! What is this country comin to? They have gone and outlawed slavery in Mississippi! gwb

Did Obama promise he was going to do a "Lincoln" on slavery?

Mississippi is just closing a loophole, I suppose. At least, I don't think they've had any slaves for quite some time. Maryland, on the other hand, had floggings in prisons and county jails until 1952, and didn't outlaw it until 1972.

TSB:We have liberal idiots out here that make Di-Fi look like an Einstein/gunfighter combo. These guys can't even read an 8 page bill produced by their own comittee! When someone reads it for them they say: 'Oh,how'd that get in there?' gwb
http://seattletimes.com/html/localnews/2020373291_westneat17xml.html
(I guess it will be nice to have the Sherrif stop by every year to make sure everything's ok but will he have time for a cup a coffee?)

TSB: Even if George Washington had drones I don't think he would have tolerated these civilian casualty numbers. (estimates are 2% are AQ leaders) Lindsey seems to think he can tell the rotary club any info he wants.
gwb
http://www.rt.com/usa/sen-lindsey-graham-says-us-drones-have-killed-nearly-5000-people-185/

These guys can't even read an 8 page bill produced by their own comittee! When someone reads it for them they say: 'Oh,how'd that get in there?'

That guy is lying. He's put the same language in several previous bills, hoping no one would notice.

Corporate medicine! The captive consumer. We're non-profit but our secret is that nobody can figure out why we charge so much! Steve Brill interview on Daily Show was brilliant! gwb

GWB, CAA:. I'm sure legislators are way too busy to read bills their staffers write. They'll be time to read it after it passes. Until then, they're clueless and can't be held responsible..

TSB: Kerry off on 1st trip. 11 countries. Nuland says it's a listening tour. Albright says nobody's a rock star like Hillary, but sure.. he knows the issues. There will be no policy talk because (my take) "We don't have a foreign policy; It's a military policy so, I don't know, ask the Navy or something? gwb
http://security.blogs.cnn.com/2013/02/24/kerrys-first-trip-trying-to-sidestep-the-pitfalls/?hpt=hp_c5

Congress flying commercial should be a big plus for FSO's looking for a few relaxing weekends. Maybe Kerry can take senators on some great trips on his plane. (not the 3 amigos though!) gwb

Britain's most senior Catholic cleric resigns ahead of vote to elect the new Pope - but contests allegations from four current and former priests (Independent)
TSB: This guy got all fired up about becoming the next pope, but then 4 guys accused him of 'foolin with the alter boys'... and he folds within 1 day!? Maybe they will elect a woman this time. gwb

http://www.washingtonpost.com/blogs/right-turn/wp/2013/02/25/why-was-michelle-obama-at-the-oscars/
TSB Michelle has found a use for the military! I wonder how much those gold braid things cost? I think Mamie Eisenhower and Jackie Kennedy would have both blown a gasket. gwb

GWB, Michele is lucky the Oscars were this week. After the budget sequester O'pacalypse hits, the best escort the Pentagon will be able to put together for FLOTUS will be half a National Guard squad.

That's pretty good TSB about Flotus! This hockey puck Grienewski wants to bring his green coal trains through Longview.
http://seattletimes.com/html/localnews/2020421425_coalstrategistsxml.html
We will show him what to do with his 'passion for growth' if he shows up down here! gwb

Re: O'pocalypse, better get some fishing done before the rivers disappear.

John Kerry says Americans 'have a right to be stupid'

Damn Right TSB! I think this Kerry guy is going to be a lot of fun!
gwb

The Limerick King
TSB: Wait til you see the photo!gwb
http://www.zerohedge.com/contributed/2013-02-26/fiat-scientist

TSB: How did the canon shot go? Or is that classified? gwb

GWB: After some consideration, I did the salute on a trap range, using shotguns. My neighborhood isn't quite up to a cannon yet. Well, maybe we'll try them again next July 4.

Good thinking! I would have been worried about em calling in a drone strike. gwb

TSB: They've grounded 'flyin Joe Biden' from using AF2 on the weekends. He's going back to Amtrak but I think it would be cooler if he hired a former Nascar driver to get him back and forth.
Think of the records!, the crashes!gwb

Joe 'Double Barrel' Biden loves AMTRAK! He used to brag that his favorite train crew would delay the DC-to-Delaware departure on days when he was running late. Anyway, AF2 is probably a bargain compared to what the taxpayers spend subsidizing AMTRAK.