Accidents and Artifacts In Prague 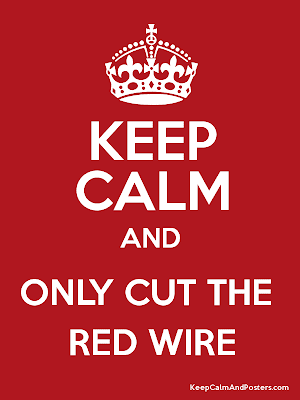 On Mission Impossible, only the taped message self-destructed in five seconds. But something more robust than that occurred to fatally injure Ambassador Jamal al-Jamal when he opened a safe inside his official residence in Prague.

The Foreign Minister of the State of Palestine, Riyad al-Malki, speaking to Voice of Palestine Radio news, described the death of his Ambassador to the Czech Republic as a “work accident.” I don't disagree.

It’s a rare accident when an Ambassador dies from his own inexpert handling of explosives, however, the incidence of that type of misadventure does seem to occur primarily among diplomats from the State of Palestine.

The Czech authorities are still investigating and we might find out more in time, but at present most news accounts seem to be in agreement that Ambassador Jamal al-Jamal triggered a small explosion – judging by the lack of evident damage to the room he was in, I’d guess it was very small, on the scale of a hand grenade – when he tried to remove a package containing several firearms from a safe in his official residence. The residence is part of a newly-constructed Palestinian embassy compound, and the safe had been relocated from the old Palestinian embassy, which had been occupied as far back as the 1980s.

Initially, there had been speculation that Ambassador al-Jamal must have triggered an emergency destruction device of some kind when he opened the safe. I didn’t believe that scenario, because, while such devices do exist, they destroy documents and computer media by incineration or chemical action rather than by explosion. As someone who remembers when U.S. embassies used sodium nitrate emergency burn barrels, I know that those things are not going to explode on you (although they might burn the building down).

What’s more, Czech police reported that there was a second safe in the residence but they found no explosives in that one, so whatever detonated and killed al-Jamal wasn’t common to the safes in his mission.

There is an internal Palestinian disagreement as to whether or not the safe was in regular use. The first news reports, which quoted the Palestinian Foreign Minister, said the safe hadn’t been opened since the 1980s. Apparently it was just forgotten and had been sitting in a corner somewhere ever since that bygone era when the PLO was trafficking Czech-made Semtex explosive and Skorpian machine pistols to allies such as the IRA. But today, Palestinian Embassy spokesman Nabil El-Fahel told Czech radio that the safe was in regular use and was opened and closed almost daily.

Which story is worse for the Palestinian State, in so far as its relations with the Czech Republic? Acknowledging that they kept firearms and small explosive charges in an active safe inside their diplomatic mission and residence as a matter of routine, or, that a forgotten artifact of a more militant past was opened in all innocence by a modern, peace-loving, diplomat who had no idea what was inside? That's a tough call.

Prague Police Chief Martin Vondrasek told Czech radio news that the firearms in the safe were not registered, but he did not describe them further. The Czech newsweekly Respeckt reported today that they were “enough to arm a unit of ten men,” which could mean that there were only ten weapons.

I suppose an arsenal that size might impress Central Europeans, but c’mon, I personally have three pistols I keep in a bedside table plus two shotguns in a closet. And my residence doesn’t even have diplomatic inviolbility, not that I need it in the Commonwealth of Virginia.

One last thought: do you suppose there are more booby-trapped arms caches in Palestinian embassies and diplomatic residences elsewhere?

I learned from press reports tonight that Ambassador al-Jamal was first posted to Prague in 1984 and for several years thereafter, then departed before returning last October as Ambassador. Could that possibly resolve the conflicting statements about the nature of the safe that he opened? If it really was a left-over item from the PLO mission in Prague in the '80s, as the Palestinian Foreign Minister has claimed, could it possibly have been a safe that al-Jamal used back then? If so, he may have known what was in it, and thought that he could open it safely.

Aha! I have my first entry in the funniest statement of the year contest.
"Prague Police Chief Martin Vondrasek told Czech radio news that the firearms in the safe were not registered"
Astounding!

James: Besides being unregistered, I'd like to know whether they were Czech-made and provided to the PLO way back in the day. If so, they might not even be on the books of the factory that produced them. Czech small arms are excellent, and large quantities of them were sent to Libya, the IRA, Red Brigades, RAF, and others in the '70s and '80s. Carlos the Jackal favored them.

Take that climate skeptics! Hottest year down under since 1901. Even the pythons are trying to leave. gwb

do they have pythons?

They're pretty close to Bali, so they must have Pythons, I think.

James, TSB: Here is my nomination for funniest photo collection of the week. Behold the least popular socialist in the world! gwb

GWB: Poor Hollande! I can't figure that guy out; he seems such a sad-sack personality, but he gets the hottest women in French politics, especially his ex live-in, Marie-Ségolène Royal.

Personal confession: I have a hopeless lust for 60 year-old European socialist babes, starting with Ségolène and including Sherie Blaire. I only wish I knew the secret of Hollande's way with the ladies.

Killer pythons at 5 star hotels, exploding diplomatic safes in Prague, Global Warming scientists unable to find summer, a world gone mad I say, mad. On a positive note news that the post graduate job market for gender studies majors has exploded to 5 possibly, 6 positions nationwide with 4 being offered at MSNBC as interns. CNN has just broken the story that they have possibly found an item of real news, analysts say this is unexpected.
Finally our intrepid reporter TSB has filed his latest story proving without a doubt Hollande is still french. Back to you GWB!

Thanks James! It's been quite a year already and we have a ringside seat for all the real news! (If I had a pistol in my bedside table I would forget it was there.)

TSB, I am almost finished with the intro to Arthur Herman's new book and I am pulling the kindle trigger on this one. It's going to be a great read. gwb

TSB: There is a lot of free education appearing on the internet. I decided to try a lecture on Plato and Socrates by a Berkely professor. The 1st 5 minutes contained comments about the upcoming exam and about 45 Umms and ahhhs. (It was 'unlistenable' but I did notice he was striking the fear of God into the students to stay awake.)

By contrast, I have been reading the introduction to a new book by Arthur Herman on the same subject. Herman's last book, about the influence of the Scots on western civilization sold 250,000 copies. It occurred to me that if a student was exposed to that writing instead of that boring Berkely lecture on Plato's 'Republic' a lot more young people would grow up Iearning something about the world's first philosopher: Socrates

I would bet that Arthur Herman would be happy if a million students were to have access to his new book on an e-reader like my kindle for a quarter or a semester for a nominal price like 10 cents a student. When the semester was over the student might be offered to purchase the book for a discounted price of say….half the kindle price or $7.99. Isn't this a great way to introduce competition into academia? Couldn't a professor like Herman peddle well produced lectures in the same way on the internet? What is keeping this from happening? gwb

TSB: A fun article about Roscoe Bartlett. The guy is 89, has 19 patents and a wife who makes home made soup like mine. For about 6 weeks worth of Afghan war $$$ we could harden our electric grid like the Canadians did... but who needs electricity? gwb
http://www.politico.com//magazine/story/2014/01/roscoe-bartlett-congressman-off-the-grid-101720.html

GWB: Herman is certainly a great lecturer, unlike many professors. I took a night class from him 10 years (?) ago, and as he would say, you didn't get the Reader's Digest version when you asked him a question. Consistently fascinating.

The academic world is experimenting with online options, such as Massive Open Online Courses, and I suppose some kind of pay per view lectures could happen in the future. The American Historical Asociation is having its annual conference right now, and I'm sure some of the papers are about non-traditional forms of teaching. Controversial, however, because that breaks a lot of academic rice bowls.