Stop Replying to All, Our In-Boxes Are Full 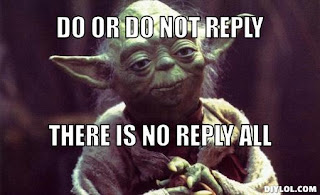 The National Counterterrorism Center puts out a weekly newsletter aimed at domestic law enforcement agencies and anyone else with an interest in non-classified news articles about terrorism. It's a modest enough thing, or at least it was until this week when someone in the Seattle area 'replied all' to the distribution list. She was answered by another 'reply all' from Nebraska, which was followed by some out-of-office messages, again 'to all.' Then she replied to all again to withdraw the first message, and so on, and so forth, until today the cyber floodgates were opened and hundreds of auto messages started going out to thousands of people on the newsletter's distribution list.

By noon today I'd received over 500 messages from people asking the NCTC to remove them from the newsletter distribution list, or from people replying 'to all' to tell other people to stop replying to all, or from NCTC advising me of non-deliverable messages. Finally, I set up an email rule to send any more messages to my deleted folder.

I just hope this is really a fiendishly clever ISIS denial of services attack on the NCTC. That would be less alarming than the obvious explanation, i.e., that thousands of people in Homeland Security intelligence fusion centers from sea to shining sea are dumb enough to keep replying to all when they try to get out of this email storm.