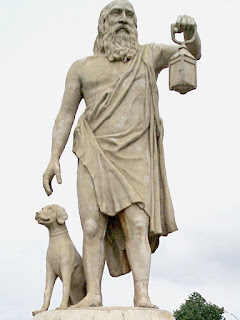 Diogenes can stopping looking, because we've found an honest man.

He's in Pakistan, and he can't speak freely, but we know he's honest because he just said the truest thing ever about the scam bomb detectors that are used at his country's airports and other sensitive sites.

The scam detectors are those magic wands known as the ADE-651, among other names. See this for more information about them. Despite being repeatedly exposed as frauds, the devices keep selling.

When foreign supplies were cut off after the ADE-651's British manufacturer was convicted, some of his former clients began making their own knock-off versions (can you counterfeit a fraud?) for sale in their own countries. One of those countries is Pakistan, which is now equipping its Airport Security Force with home-made worthless props with which to 'screen' vehicles for bombs.


Islamabad (AFP) - With radio-like antennae meant to swivel and point at vehicles carrying bombs, "magic wand" explosive detectors proliferated throughout conflict zones in the 2000s until they were exposed as a global scam.

But in an astonishing security threat, more than 15,000 of a new variant of the handheld device have been made in Pakistan to guard high-value facilities such as airports and government installations, despite officials conceding they are effectively useless.

Official silence over the matter may be linked to the enormous sums of money involved in the business, observers say, while many bureaucrats fear for their jobs if they speak out.

"Powerful people make money through these scams and you cannot offend powerful people, even if it means endangering lives," said one former official of the interior ministry."

Pakistan initially imported foreign detector devices such as the ADE-651 and the German made Sniffex, according to a government source, but in 2009 Pakistan's Airport Security Force (ASF) took over making and selling the wands.

The ASF -- which declined multiple requests for comment -- is technically a civilian institution but is staffed by many serving senior officers deputed from the powerful military, which wields considerable influence over the country's defence and foreign policy.


Truth only goes so far, when the interests of powerful people are involved. But, from what I see while browsing Pakistan Army forums, I'm holding out hope that there are enough honorable soldiers there to bring this disgraceful scandal to an end.

TSB: Don't put this on a poor Afghan soldier. To keep this from going on for another decade we need to resort to an expert in the 'BLACK ARTS' of surveillance and smear. Fox News has the best crew of these guys around and with the departure of Roger Ailes 5 of them have already been fired in just the past week...with more to come as the investigation gets rolling. In this 11 min video Cenk Ugyar explains how he was warned about 'THE FOX BLACK ROOM'in 2011 by his employer MSNBC. They were afraid he could be destroyed if he criticized Bill O'Reilly or Roger Ailes... because nobody had ever gotten away with that! https://youtu.be/l8UKZ8zASUQ gwb (Do they have private detectives and anonymous bloggers in Pakistan? That plus a 'hot' former State Dept.Spokeswoman might do the trick.)

TSB: They call him 'The Economic Jesus of Spain' and he has just signed on to turn the Venezuelan economy around. If this works I predict he will be called in at the last minute to save Hillary's campaign. gwb

I saw the Venezuela news. More Marxism at this point seems counterintuitive, but 'in for a penny, in for a pound,' I guess. Did they consider Pope Francis? He has a sort of Peronist economics, and that might be more practical than the Marxist kind.

The Pope would be really upscale from this guy but I don't think he's in to Jesus lookalikes with phony resumes. I like the idea of a free trade zone where citizens of both countries can set up businesses and ship stuff into and out of both countries without tariffs or taxes. Wasn't that your idea TSB? They could also get investment from outside.