Biden His Time On Ambassador Appointments 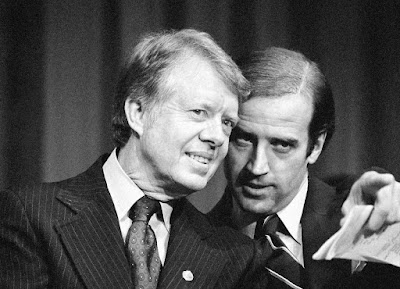 When you're as old as Biden, and have been in Washington as long as Biden, time becomes of very little importance, really. What difference does it make if he waits a few months before making any ambassadorial appointments? What's the rush? Those embassies and foreign capitals will still be there this summer, or next year. C'mon man!© Stop the malarkey and get off his back about it, already.
But some people are just impatient, according to CNN:

Washington (CNN) - More than two months into his term, President Joe Biden has yet to name a single ambassador to send overseas, putting him behind the pace set by his most recent predecessors and leading to early frustrations among some career State Department officials and big-time Democratic donors.
Though Biden has been presented with the names of top contenders for ambassadorships to the European Union, NATO and other high-level posts, including China and Russia, and is expected to make a decision on at least some of those positions in April, people familiar with the matter say that on the vast majority of ambassador posts, the president is still weeks away from deciding on the broader makeup of his diplomatic corps.
The slow-moving process has however been the subject of rising frustration among some top-level donors, who have been eyeing key ambassador posts since Biden won the election. The whispers have largely remained in the background, however, as top Biden advisers have made clear that campaigning for an ambassadorship is highly frowned upon.
A key gatekeeper is Katie Petrelius, who served as national finance director for the Biden campaign, and is now the special assistant to Biden for presidential personnel. She is tasked with fielding inquiries from donors, lawmakers and others who are interested in ambassador posts.
"Under President Biden, ambassadorships will be remarkably hard to come by," a top Biden donor who is familiar with the process told CNN. "That has been made perfectly clear."
The State Department has identified a number of career officials who could take on ambassador roles, said a State Department official. Without White House decisions on which political appointees will get certain posts, the department is stuck waiting.
Several prominent names are already topping the lists for some posts: former Ambassador Nick Burns for China; former Biden national security adviser Julie Smith for NATO; former Chicago Mayor Rahm Emanuel for Japan.
Biden is also keeping in mind longtime friends and allies from the Senate who were helpful to his campaign. In addition to Cindy McCain, who is seen as on track for a European post, Biden is also believed to be considering former Missouri Sen. Claire Mckaskill, former Arizona Sen. Jeff Flake and former Colorado Sen. Ken Salazar for posts, along with Vicki Kennedy, whose late husband Edward Kennedy served along Biden for decades.

So it looks like the widows of his old cronies are first in line for appointments, followed by big-bucks donors, followed by living ex-cronies, and then the current and former career officials can fight for what's left over.
The mere fact that Biden's campaign finance director is now his special assistant for personnel ought to tell you how the appointment priorities stack up.
Cultivate the value of patience, all you wishful career officials.
Posted by TSB at 10:20 AM
Labels: C'mon Man!©, Joe Biden