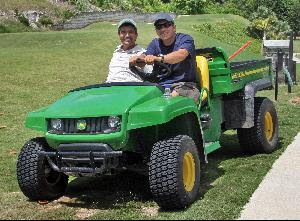 The four Chinese Uighurs who were released from U.S. custody in Guantanamo Bay and accepted by Bermuda back in June have found a little temporary work doing landscaping, according to the Bermuda Royal Gazette (Uighur men working at Port Royal Golf Course):

Mr. Brown [chairman of the board of trustees for the golf course] told The Royal Gazette: "They have been offered a temporary position at Port Royal until the Grand Slam [golf tournament]. They are doing projects to clean up areas. We wanted to try to make the course as pretty as possible so there are projects they can do. All four of them have been given a job there. It's on a temporary basis."

Seems OK. However, the Uighurs are about to be taught a lesson in the ways of the West.

But Attorney General Kim Wilson told this newspaper last month that the men did not yet appear to have the right to get jobs, though she said they could live indefinitely here with the Immigration Minister's permission.

Senator Wilson said at first glance it was unclear how they could be granted work permits under the Bermuda Immigration and Protection Act 1956.

"It would seem they are precluded from working," said the Justice Minister, adding that she would need to study the legislation in more depth to determine if it did give the Minister discretion to allow them to work.

Mr. Brown said yesterday: "I know that the administration at Port Royal worked with the Immigration Department to sort it out. I know there wasn't a formal application."

He said the trustees agreed that the Uighurs could replace five Filipinos who were doing the same jobs, after the workers decided to return to the Philippines.

"We actually needed somebody anyway," said Mr. Brown. "The Filipinos had committed to stay to October. Then in July they all gave their notice so it was almost opportune."

Labour and Immigration permanent secretary Derrick Binns said: "I can confirm that the Department of Immigration has granted the four men permission to work in Bermuda under provisions of Part V of the Bermuda Immigration and Protection Act 1956."

He did not answer questions about whether the jobs were advertised and, if so, whether any locals applied.

The Island's strict immigration rules usually require employers to ensure that no qualified Bermudian is available to fill a post before a non-Bermudian can be considered.

"This Ministry is not able to speak on behalf of the trustees of the golf courses with regard to the application process or the conditions of employment," said Dr. Binns.

Well, well, well. So the capitalist class in Bermuda was already exploiting the surplus labor value of imported Asian peasants - those five Filipinos who fled - when the Uighurs so opportunely came along and became the golf club's newest wage slaves. I'm surprised the Uighurs didn't learn about this sort of thing while growing up in the People's Republic of China, but I guess they were too busy making bombs when they should have been studying Marx.

And speaking of wages, I assume the Royal Bermudian Inland Revenue Service, or whatever they call the tax police, will be having a little chat with the Port Royal Golf Club's board of trustees, and that will cost the Uighurs. By the time capitalism is done with them, the Uighurs might end up wondering why they ever left Guantanamo.
Posted by TSB at 4:05 PM
Labels: Bermuda, Uighurs