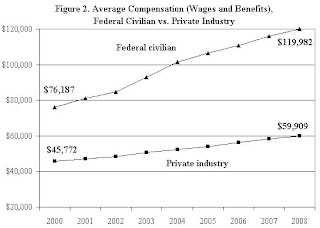 The Cato Institute has pointed out, with much indignation, that Federal Pay Continues its Rapid Ascent while private sector pay lags behind:

The Bureau of Economic Analysis has released its annual data on compensation levels by industry (Tables 6.2D, 6.3D, and 6.6D here). The data show that the pay advantage enjoyed by federal civilian workers over private-sector workers continues to expand.

As much as I feel like lighting up a Cohiba after seeing the above chart, I realize that the public-private pay disparity can't really be quite that large. The Federal workforce is comparatively very small (about 1.9 million out of about 108 million employees in the private sector), and is heavily weighted toward professional jobs (since everything else is contracted out), therefore head-to-head comparisons tell us little.

For another thing, the federal job market has a certain barrier to entry in the form of personnel security clearances. I'd love to see an economic study that quantified the monetary value of Top Secret clearances; when I was a contractor performing staff-like functions for the same office where I now work as a direct hire employee, we generally considered that a contractor job candidate who had a current, transferable, TS clearance was worth another $10,000 in annual salary. The need for many, possibly most, federal employees to have some level of security clearance certainly restricts the labor market, and that should result in somewhat higher salaries. The Cato Institute is a free-market economics kind of place, isn't it? Why don't they sponsor such an analysis?


p.s. - Regarding those Cohibas and other fine Cuban cigars that one often sees for sale while on TDY outside the United States, don't think of it as trading with the enemy, think of it as burning their crops!
Posted by TSB at 6:37 PM
Labels: Cato Institute, Public-Private Pay Gap

Hmm, it includes wages and benefits. Could part of the increase be that our employer is absorbing much of our health care cost increases?

Non-wage compensation definitely accounts for part the growing gap. The BEA comparison on wages alone - not including other benefits - still showed the feds having an advantage, but by a less steep curve.

I'll have to look for data on comparative public-private health care costs. I do know that employer-based health care plans are still the norm in the private sector. According to U.S. census data (at: http://www.census.gov/prod/2008pubs/p60-235.pdf figure 7) 68% of the public reported having a health care plan of some kind other than a government-run plan like Medicare or S-CHIP, and nearly all of them reported having an employer-based plan. Only 9% directly purchased their plans.

I suspect that public-vs-private health care costs would still be an apples-to-oranges comparison, however, since the federal employee coverage pool is probably much more middle class and low-risk than the general public pool, with fewer crack addicts, etc.