Peshawar: Bomb Attack On Consulate Car With No Serious Injuries 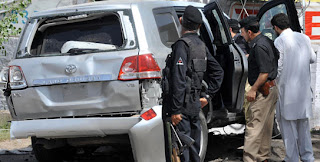 State Department employees in Pakistan have another reason to thank the U.S. taxpayer for the enormous investment he has made in heavily armored vehicles for our missions abroad.

This morning, the Taliban ambushed a two-car convoy of consulate employees traveling between home and office, remotely detonating a roadside bomb when the convoy passed nearby. According to local new media, the bomb was about 50 kilos (100 pounds), which is more than large enough to destroy an unhardened vehicle. Happily, our well-protected vehicle sustained only minor damage, and the two employees riding in it were only slightly injured.

The New York Times has this report:

The attack was the first against Americans since the Navy Seal raid on May 2 that killed Osama bin Laden in the city of Abbottabad.

In a phone call to The Associated Press, a spokesman for the Pakistani Taliban, Ahsanullah Ahsan, claimed responsibility for the attack.

“We say to the Americans and NATO that we will carry out more deadly attacks, and we can do it,” Mr. Ahsan said in the report.

An American who lives three blocks from the attack said the explosion was “a big blast that shook the earth.” The attack was timed for about 8:30 in the morning, when employees of the consulate regularly drive to work from their homes in the upscale neighborhood of University Town, the American said.

A Pakistani government official said two Americans were slightly injured and that they were riding in a vehicle that belonged to the Regional Security Office, the group responsible for security arrangements for American employees at the consulate.

Peshawar, the provincial capital of Khyber-Pakhtunkhwa Province, is considered a relatively high-risk area because it borders the tribal areas where the Pakistani Army has been fighting militants for more than two years.

The last attack against an American in Peshawar was in 2008 when gunmen fired at the vehicle of the American consul-general, Lynne Tracy, as she was traveling to work. She escaped unharmed.

Employees of the consulate were placed under immediate “lockdown” after the attack Friday morning, an American official said.

TSB: To those of us who don't know Peshawar from Rawlpindi it seems amazing that there would be so few attacks against State Dept. employees since the US is the enemy. Is this because of good security or because they prefer to target the Pak government, politicians, police etc??
gwb

It is mostly due to extremely good security. And intelligence. And our practice of reducing risk by drawing down personnel and/or temporarily closing offices when intelligence indicates we ought to.

Being a U.S. government employee in Peshawar is like daring the Taliban and AQ to attack you. We are totally in their face. But our presence there is vital to national objectives.

And there is that word, "regularly." That will kill you.

It's actually worse than regularly; it's unavoidably. The consulate office and the residences are in different parts of town (with no option to relocate) that are separated by an airport. To get to and from, the employees eventually have to go down a bottleneck on the single road that runs around the airport runway. They can vary times, sleep in the office, etc., but sooner or later somebody has to go through the choke point.

And I am thinking that the main work of the office is handing out visas, both IV and NIV. Perhaps this is too high a price to pay for an consulate that only benefits Pakistanis.

All visa services in Pakistan are done at the embassy in Islamabad.

If the only national interest we had in Peshawar was that, no doubt they would have closed the place long ago.

We do spend a lot of money on security for our diplomatic and consular missions abroad. We make them harder targets for the bad guys. This helps keep our people alive.

It just doesn't do to make it easy to kill our people. It's good not only make that difficult to accomplish, but to discourage it whenever possible.


I've quoted you and linked to you here: http://consul-at-arms2.blogspot.com/2011/07/re-peshawar-bomb-attack-on-consulate.html