Embassy Compounds Under Attack In Damascus 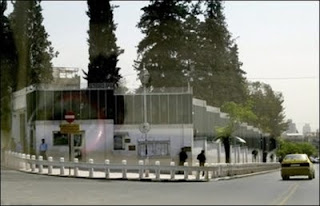 AP is quoting unnamed U.S. officials who say no one was injured in this morning's attack:

The U.S. said no embassy personnel were hurt in the melee and there was no immediate word on any other casualties.

The mob also attacked the residence [of U.S. Ambassador] Ford shortly after protesters breached a wall and stormed the embassy compound, U.S. officials in Washington said. They said no one was injured on the attack on Ford’s home, which is not part of the embassy compound, but that there was damage to his residence.

A U.S. official said the Obama administration will formally protest the attack and may seek compensation for the damage. The official said the State Department would summon a senior Syrian diplomat on Monday to condemn the assault and demand that Syria uphold obligations to protect foreign diplomatic missions.

Because the Marine guards reacted quickly, the attackers were not able to break into any buildings on the compound, the official said. But the attackers damaged the chancery building.

The official, who spoke on condition of anonymity because he was not authorized to discuss the matter publicly, said Syrian security forces were slow to respond to the attack.

ReutersFlash is reporting that mobs have broken into the U.S. and French Embassy compounds in Damascus, Syria, this morning. This is an escalation of the civil disturbances that have been going on at both compounds for the past two days, and which have already resulted in diplomatic protests from both governments.

There is no indication that mobs have broken into embassy buildings, just onto the compounds. Normal procedure would be to have employees shelter inside the buildings until the compounds have been cleared. There have been no reports of any injuries to employees at either embassy.

According to Associated Press, security guards at the French Embassy fired shots in the air to disperse the mob. There have been no similar reports about the U.S. Embassy.

The cause/pretext/justification for the riots was stated by the Syrian Foreign Ministry in a notice posted on its website yesterday:

Syrian Foreign and Expatriates Ministry on Sunday summoned the U.S. and French ambassadors to inform them of its strong protest on their visits to Hama governorate without the ministry permission, which violates Article 41 of the Vienna Convention on Diplomatic Relations stipulating for non-interference in internal affairs of states they are accredited in and reviewing official issues with the Foreign Ministry.

The Ministry said the U.S. and French ambassadors' visit to Hama constitutes a flagrant interference in Syria's internal affairs and this affirms the existence of foreign encouragement and support to any thing that could undermine security and stability in the country at a time when the national dialogue aimed at building a future Syria is launched.

I will not be revealing any Matter Of Official Concern if I remark that the U.S. Embassy in Damascus (photo above) is highly vulnerable to mob attack by virtue of its location on a very small plot of land with hardly any setback distance from the surrounding streets. It is no Fortress Embassy, to say the least. Neither is the Ambassador's residence, which is in the vicinity of the embassy.

Why hasn't that old vulnerable dump of an embassy been replaced with a new forbidding Fortress? Because, according to last year's OIG Report, the Syrians won't cooperate with us on acquiring a site to build on:

The Embassy and the Bureau of Overseas Buildings Operations (OBO) have been seeking a plot for a new embassy compound since 2001. The government of Syria’s efforts to develop a diplomatic quarter in the city of Damascus have failed to materialize. The United States is awaiting Syrian approval for a site to resolve overcrowding and other problems at the present chancery and annex.

A serious terrorist attack was launched against the embassy in 2006, but failed.
Posted by TSB at 6:40 AM

That is scary TSB! Why don't we just hang a for sale sign out front and tell Assad we're sending the employees to Tel Aviv beaches for a sanity break? gwb

http://bhadrakumarviews.blogspot.com/2011/06/turkey-toughens-stand-on-syria.html
Turkey toughens its stand on Syria
TSB: I like this former Indian diplomat cause he always brings lots of facts. I disagree with him tho.. and think we should be supporting Turkey re: Syria because they are actually trying to do something about the problem at their doorstep. gwb

I don't know that Turkey wants our (public) support, but Syria needs to be bitch-slapped by somebody, and it might as well be the Turks. Go the Full Ottoman on Assad.

Thanks for the update TSB!

TSB: I wonder who will be flying over for the memorial? My bodyguard (George"W") tries to kill me regularly... I suspect low wages in this case. gwb

I don't think we'll have a major dignitary at the funeral. VP Biden will go anywhere and do anything during normal times, but he's probably busy with the debt ceiling brohaha.

The later report said he was killed by a close friend who stopped by to talk with him and then shot him as he came out of the bathroom. (AlJazeera)

TSB: If the Taliban managed to kill
"Our Guy Karzai" I wonder what our strategy would be then?? Start over?
gwb I noted that 41 Marines from Camp Pendleton have died there since April 1st That is a lot! gwb