The Decamping Of The Saints (Or, The Dutch Find The Limits Of Tolerance) 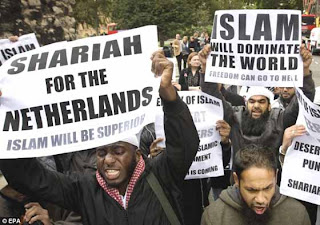 It turns out that when the most tolerant society in Europe imports a million Moroccan and Turkish guest workers, plus refugees from places like Afghanistan, Pakistan, and Somalia, the result is not all Unicorns and Rainbows. Instead, it's having fellow citizens who applaud the killing of filmmakers who criticize the treatment of women in Islam.

So, now the Dutch government has decided that a multiculti society is fundamentally a bad idea, and it wants to reverse course.

I'm not sure why I didn't see this news before, but back in June the Dutch Interior Minister presented a bill to parliament that would force integration of immigrants to Dutch values, if possible, and remove residence permits from those who refuse to conform. Quite a reversal of policy.

Here's a news story with details and links to the Interior Minister's action plan (in Dutch):

The Dutch government says it will abandon the long-standing model of multiculturalism that has encouraged Muslim immigrants to create a parallel society within the Netherlands.

A new integration bill (covering letter and 15-page action plan), which Dutch Interior Minister Piet Hein Donner presented to parliament on June 16, reads: "The government shares the social dissatisfaction over the multicultural society model and plans to shift priority to the values of the Dutch people. In the new integration system, the values of the Dutch society play a central role. With this change, the government steps away from the model of a multicultural society."

The letter continues: "A more obligatory integration is justified because the government also demands that from its own citizens. It is necessary because otherwise the society gradually grows apart and eventually no one feels at home anymore in the Netherlands. The integration will not be tailored to different groups."

The new integration policy will place more demands on immigrants. For example, immigrants will be required to learn the Dutch language, and the government will take a tougher approach to immigrants to ignore Dutch values or disobey Dutch law.

If necessary, the government will introduce extra measures to allow the removal of residence permits from immigrants who fail their integration course.

The measures are being imposed by the new center-right government of Conservatives (VVD) and Christian Democrats (CDA), with parliamentary support from the anti-Islam Freedom Party (PVV), whose leader, Geert Wilders, is currently on trial in Amsterdam for "inciting hatred" against Muslims.

As expected, Muslim organizations in Holland have been quick to criticize the proposals. The Moroccan-Dutch organization Samenwerkingsverband van Marokkaanse Nederlanders, which advises the government on integration matters, argues that Muslim immigrants need extra support to find a job. The umbrella Muslim group Contactorgaan Moslims en Overheid says that although it agrees that immigrants should be better integrated into Dutch society, it is opposed to a ban on burqas.

But polls show that a majority of Dutch voters support the government's skepticism about multiculturalism. According to a Maurice de Hond poll published by the center-right newspaper Trouw on June 19, 74 percent of Dutch voters say immigrants should conform to Dutch values. Moreover, 83 percent of those polled support a ban on burqas in public spaces.

The proper integration of the more than one million Muslims now living in Holland has been a major political issue ever since 2002, when Dutch politician Pim Fortuyn was assassinated for his views on Muslim immigration, and since 2004, when Dutch filmmaker Theo van Gogh was stabbed to death for producing a movie that criticized Islam.

Muslim immigration to the Netherlands can be traced back to the 1960s and 1970s, when a blue collar labor shortage prompted the Dutch government to conclude recruitment agreements with countries like Algeria, Morocco, Tunisia and Turkey. In the 1980s and 1990s, Muslims also arrived in the Netherlands as asylum seekers and refugees, mainly from Afghanistan, Bosnia, Iran, Iraq, Pakistan and Somalia.

As their numbers grow, Muslim immigrants have become increasingly more assertive in carving out a role for Islam within Dutch society. For example, a documentary aired by the television program Netwerk in June 2009 reported that Dutch law was being systematically undermined by the growth of Sharia justice in the Netherlands.

In December 2004, the Dutch Ministry of the Interior published a 60-page report titled From Dawa to Jihad. Prepared by the Dutch intelligence agency AIVD, the report says that the Netherlands is home to up to 50,000 radical Muslims whose key ideological aim is to target the Western way of life and to confront Western political, economic, and cultural domination.

The report concludes that Dutch society is poorly equipped to resist the threat of radical Islam because of "a culture of permissiveness" that has become synonymous with "closing one's eyes" to multiple transgressions of the law.

As for Interior Minister Donner, he has undergone a late-in-life conversion on the issue of Muslim immigration. In September 2006, while serving as justice minister, Donner provoked an outcry after saying that he welcomed the introduction of Islamic Sharia law in the Netherlands if the majority wants it. He also said Holland should give Muslims more freedoms to behave according to their traditions.

After applauding Queen Beatrix for respecting Islam by not insisting that a Muslim leader shake hands with her during a visit to the Mobarak Mosque in The Hague, Donner said: "A tone that I do not like has crept into the political debate on integration. A tone of: 'Thou shalt assimilate. Thou shalt adopt our values in public. Be reasonable, do it our way.' That is not my approach."

Fast forward to 2011 and Donner now says his government "will distance itself from the relativism contained in the model of a multicultural society." Although society changes, he says, it must not be "interchangeable with any other form of society."

If the Dutch adopt this bill and are serious about enforcing it, they will escape the dilemma that was famously framed by the 1972 novel The Camp of the Saints, which you can read here.

Watch for this backlash to spread to other countries.

TSB: Great post! I wonder if Newt has any Dutch Twitter supporters? Those words are really looooongenburger!gwb

Also re emmigration: US,Turkey,Isreal
Lebenan, Saudi Arabia,Iraq, Iran, Jordan all agree Assad must stay and reform! (That means quit killing them faster than you can hide the bodies.) Otherwise Shiites will destabilize all the above countries. Pakistan, China and Russia also support Assad and will be sending more arms. At least we are all on the same side now! gwb

TSB: You are probably familiar with the Arlington, VA company that had their guy kidnapped in Lahore.
http://www.dawn.com/2011/08/13/us-citizen-kidnapped-from-his-lahore-residence.html

Will this mark the exodus of US development efforts from Pakistan? gwb

The kidnap victim in Lahore was apparently an employee of a USAID 'implementing partner' but I don't know which one. He had some stones to live in Pakistan like that, I'll tell you.

Kidnapping for ransom - non-political, not related to terrorism - is a common crime in Lahore, so this might end with him released.

That Dawn story has been changed, including the name of the man. Here is the Atimes version. gwb

Police said Weinstein had lived in Lahore since 2006, working for J E Austin Associates, however police were never informed about him. Police claimed that the manner in which the kidnapping was carried out was extremely well planned and meticulously executed, ruling out the incident to be a case of kidnapping for ransom.

This AM Dawn story restored with new details. I wonder if phone hacking has become a universal tool/threat? gwb

I didn't see a reference to phone hacking. In re kidnapping threats, I suppose geo-location via mobile phones could be a useful tool.

TSB: There was no reference. Just that they were checking all his recent phone calls for clues/people who would have known his plans. Have you noticed NO public comments from Zardari since the Bin Ladin raid? I wonder if he might not be gone soon and also if the Pak Taliban might not be moving to get all westerners out of "their" country? (with help from ISI/Army)
gwb

The kidnapping in Lahore might or might not be politically motivated, but it doesn't matter. If development people take it as a threat and start to move out of Pakistan, then it will have a long-term political impact whether intended or not.