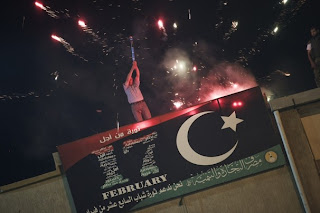 The Chairman of the Transitional National Council, Mustafa Abdel Jalil, held a press conference this morning. Here are some of the highlights, via Al Jazeera Libya Live Blog:

"I can't say that the revolutionaries have complete control over Tripoli. Bab al-Azizyah and the surrounding areas are still outside our control, so we have no knowledge of whether he is there.

"As for cities currently under siege such as Sirte and Sabha, they will rise up from within as the stranglehold that Gaddafi's forces have them under eases."

Jalil repeatedly stated that a strict Islamist regime is not on the rebel's agenda:

"We are on the threshold of a new era ... of a new stage that we will work to establish the principles that this revolution was based on. Which are: freedom, democracy, justice, equality and transparency. Within a moderate Islamic framework.

Jalil has called on the rebels to show that Libya is a country of "religiously moderate" people, and has called upon "everyone to take care and guard properties both public and private."

Jalil has congratulated the rebels on taking Tripoli, and says that Gaddafi tried to "scare" the international community by saying that Islamic extremists were part of the rebels' movement.

How silly of Qaddafi to say that Islamic extremists were part of the rebels' movement!

But, maybe Qaddafi was referring to the Libyan Islamic Fighting Group, an Islamic extremist organization that was named as an affiliate of al-Qaeda by the UN 1267 Committee, and which is part of the Libyan rebel movement.

Last March, the leaders of the Libyan Islamic Fighting Group gave an interview about their relations with the Council of which Jalil is Chairman:

The two men also disclosed that the LIFG had changed its name to Al Harakat al-Islamiya al Libeeya (Libyan Islamic Movement). Some 500-600 of its members have been released from jail in recent years. About 30 remain in Tripoli’s notorious Abu Salim prison. Mansour says there is full agreement within the group regarding its position on the LNC.

The Libyan National Council responded positively to the LIFG’s approach, Mansour says. “They said the first thing they wanted to be sure of is that we are not linked with any other group so we confirmed this point. They also wanted to make sure that there were not any other people coming from outside Libya to help – they said this is a red line. In the end, they said if you try to help our people, to help the army, and co-operate and work together, we will be happy.”

In other words, 'you domestic extremists are okay but the foreign types will cause NATO heartburn, so keep them at arms length, please.' Message understood.

Or, it could be that Qaddafi read the interview in Le Figaro on June 24 in which the head of media relations for the National Transitional Council estimated that about 15 percent of the rebels are what he would call Islamic extremists:

Q: Some in the West are concerned about infiltration of the rebellion by al-Qaida. Is there reason to fear extremism?

A: [T]hey represent only a small portion, no more than 15% of the rebels, and are not, in our view, a threat.

Maybe the head of TNC media relations didn't get the press guidance before he gave that interview. Or else, Chairman Jalil just forgot that there are some Islamic extremists among the rebels, after all.

But then, what's extreme or moderate is all a matter of definition anyway. The TNC's draft constitution establishes in Article 1 that Islam will be the religion of the post-Qaddafi state and Sharia law will be the principal source of legislation, just as it was under Qaddafi's regime. That is as per usual in the constitutions of all Muslim states, e.g., Egypt, Iraq, Afghanistan, Pakistan, and so on, and nothing extreme happens in those places, does it?

Now, once the mopping up of Qaddafi strongholds is done, Libya will move on to it's moderately Islamic future and "freedom, democracy, justice, equality and transparency" will rain down from the sky. In so far as they are not incompatible with Sharia law, of course.

Great Post TSB! But are you sure Gadaffy reads french?? gwb

Col. Q is a man of many talents, so I'm pretty sure. And out of all his female bodyguards, there ought to be a few who read French.

Did you see that his #1 son, Saif, has escaped custody and is loose? He just spoke in person with a Fox News reporter in Tripoli. The Qaddafis are my very favorite crime family!

Yes TSB... Quite perplexing! So is Saif safe?... or is he now playing Baghdad Bob? And where are the WMD?
Splendid Reporting!! gwb