Qaddafi's Misty Watercolor Memories Of The Way They Were 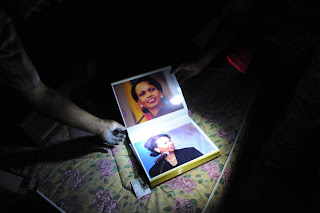 I knew that Qaddafi was hopelessly smitten with ex-SecState Condoleezza Rice. See this post from 2009. He gave her presents, and gushed to Al Jazeera about his infatuation with her:

"I support my darling black African woman," he said. "I admire and am very proud of the way she leans back and gives orders to the Arab leaders ... Leezza, Leezza, Leezza ... I love her very much. I admire her, and I'm proud of her, because she's a black woman of African origin."

Okay, we all loved Leezza. But that wasn't going to happen for him, so you would think that Qaddafi would forget her and move on. But, no.

Now that rebels have sacked Qaddafi's home and pawed through his photo albums, it turns out the poor fool has been carrying a torch for his Leezza, Leezza, Leezza all this time. Talk about misguided affection.

The thought of a lovestruck dictator mooning over photos of an old would-be girlfriend is simply embarassing.

As the Godfather would advise Qaddafi, "you can act like a man! (Slap!) Whatsa matter with you?"

Posted by TSB at 10:15 AM
Labels: Condoleezza Rice, Libya, Qaddafi

TSB: I'm SKEPTICAL about the origin of this photo album..you know how crazy Condi is about older guys in uniform!
Did she ever date anyone except that mythical college football player? This could have been a gift from Condi. Newt tweeted me today he is going to call for an investigation at the next debate. Stay Skepitcal!! gwb

Are you suggesting Condi might have an album of Qaddafi photos at her place? I never thought of that.

She might have one from Liberace too!
He had some great uniforms! gwb

TSP: Richard Haas of the Council on Foreign Relations Echoes Pepe Escobar on R2P (Right2Plunder) and says it's time to send in the troops! gwb
http://www.atimes.com/atimes/Middle_East/MH27Ak03.html

I'll be surprised if any foreign troops go in. The place is too much of a confused mess, for all the reasons Escobar lays out: eastern versus western, Salafi versus Sufi, Arab versus Berber, all trumped by an unpredictable web of tribes and family patronage networks.

I'll be surprised too! But Richard Haas seems to sound like: "These chaps won't be able to handle all this money and oil...we need to step in and do it for them!" And don't forget "The Donald" who famously said of Iraq "We spent all that money there.. Let's just take the oil!"
That stuff made him a frontrunner!!
gwb