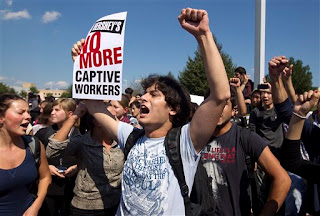 "The Exchange Visitor Program promotes mutual understanding between the people of the United States (U.S.) and the people of other countries by educational and cultural exchanges, under the provisions of U.S. law. Exchange Programs provide an extremely valuable opportunity to experience the U.S. and our way of life, thereby developing lasting and meaningful relationships." - U.S. State Department

I'm sure the J-1 visa program provides an extremely valuable opportunity for someone, but not for the exchange visitors who are earning $8 an hour doing warehouse work for a Hershey subcontractor. Those students, or visitors, or workers, or whatever they are, are protesting their conditions:

HERSHEY, Pa. (AP) — Foreign students working at a candy warehouse protested conditions and pay for a second day Thursday, chanting on Chocolate Avenue under streetlights shaped like Hershey’s Kisses, arguing that they were employed under the guise of a cultural exchange but toil away in what amounts to a sweets sweatshop. The State Department said it was investigating.

More than 100 students gathered in touristy downtown Hershey, home to the nation’s second-largest candy maker, complaining of hard physical labor, steep pay deductions for rent that often left them with little spending money, and no cultural enrichment. They said their concerns were met with threats of deportation.

“We have no money, we have no time and we have no power,” said Yana Brenzey, 19, a journalism student from Zaporizhzhya, Ukraine. She said she had no idea that she would be lifting 40-pound boxes or netting only about $200 a week when she began working in early May at the warehouse run by Westerville, Ohio-based Exel Inc.

A spokesman for the Hershey Co. would say only that the corporation expects its vendors to treat employees “fairly and equitably.” An Exel spokeswoman said the company was working with SHS Staffing Solutions of Lemoyne, Pa., which helped place the students, to resolve the situation.

The students earn about $8 an hour, the same as their American counterparts, and were fully informed about the nature of the work, SHS spokesman Sean Connolly said. The company does not intend to fire the students for their protest, he said.

[TSB Note: The Pennsylvania minimum wage is only $7.25 an hour, and state labor law counts "the reasonable cost to the employer of board, lodging and other facilities" as part of the minimum wage. If Hershey's indentured foreign servants are actually receiving $8-something per hour, I assume that is the local prevailing wage.]

“We continue to discuss the concerns they have,” Connolly said. “We hope there’s a resolution.”

The leader of the Council for Educational Travel USA, a nonprofit based in San Clemente, Calif., that also helped place the students, asserted that their motives weren’t entirely pure.

[TSB Note: By "their", the Council for Educational Travel USA is referring to the students-visitors-workers. If any of the other parties in this deal have impure motives, the Council isn't saying.]

“Somebody has been circulating a letter that they will get several thousand dollars back if they protest and be a part of this movement,” said CEO Rick Anaya. “We have not gotten any cooperation from the kids. Somebody is promising them a lot of money in order to participate in this protest.”

He acknowledged that the jobs are “fast-paced” and involve heavy lifting, but said the students knew what they would be doing. He said he became aware of complaints two weeks ago and sent managers to Pennsylvania to work out differences.

The students were offered the opportunity to leave the job if they were unhappy, he said.

They are among more than 100,000 college students who come to the U.S. each year on J-1 visas, which supply resorts and other businesses with cheap seasonal labor as part of a program aimed at fostering cultural understanding.

An Associated Press investigation published in December found students who were forced to work in strip clubs instead of restaurants, others taking home $1 an hour or even less, some living in crowded apartments or eating on floors. Members of Congress have expressed concern about misuse of the program.

The State Department is sending staff to Pennsylvania to investigate.

“The Department of State takes its responsibilities for administering the J-1 Visa Program seriously,” spokesman Mark Toner said. “It is our responsibility to ensure that all J-1 visa participants are accorded their rights under all provisions of the Summer Work Travel program.”

Yilmazcan Cebe, 20, a civil engineering student from Ankara, Turkey, said that his complaints were met with threats to force him to pay the remainder of his housing costs and that he might be barred from returning to the United States.

“We are not real workers,” said Cebe, who blamed a persistent wrist pain on the tough labor. “We are just students.”

Student protesters also came from China, Kazakhstan, Moldova, Mongolia, Poland and Romania. They said their goals were to have all the companies related to their employment negotiate on repaying them and converting their jobs to living-wage positions.

The walkout is in its second day. On Wednesday, about 150 people picketed outside the warehouse several miles away in a protest organized by the National Guestworker Alliance. Three people were arrested, including Pennsylvania AFL-CIO president Rick Bloomingdale and two other organized labor officials.

On Thursday, the students protested with a bullhorn, leaflets and a petition they planned to present to Hershey executives.

“All we can do is work and sleep,” said Godwin Efobi, 26, a Ukrainian student originally from Nigeria.

The complaints began this year with two students from Central America who went to the state AFL-CIO, which referred the matter to the national office and the New Orleans-based National Guestworker Alliance, Bloomingdale said.

One foreign worker, he said, showed him a paycheck for 32 hours — at $8.35 an hour — that amounted to just $44 after state and local taxes and deductions for rent.

“I’m shocked that all of this is happening in modern-day America,” Bloomingdale said. “These are 400 warehouse jobs, packing jobs.”

Danielle Grijalva, director of the Committee for Safety of Foreign Exchange Students, an advocacy group in Oceanside, Calif., said the problems faced by the workers at the chocolate plant are not unique.

Similar complaints have been made for years across the country, and the State Department has not done enough to fix the J-1 program, she said.

“People are leaving our country hating America, hating Americans,” she said. “If this is the impression of the United States that we want these students to have, then perhaps we should thank the State Department, because they are not implementing regulations to protect these students.”

The National Guestworkers Alliance posted this video with student-visitor-worker interviews on its YouTube Channel:

TSB: I thought going to foreign countries by exchange students and then protesting against oppression was a tradition started by the Clintons. It's just a "phase" so you can go back home and become a great politician! gwb

Aren't these the same conditions for U.S. workers?

Good point. So far as I can see, the conditions are the same.

But then there might not *be* any American workers if the first place, not if Hershey's subs can bring over cheaper and more tractable foreign students by means of this curious cultural exchange visa program.

The J-1 scheme depresses wages for Americans who do the same work, adds to unemployment - what's our unemployment rate now? - and screws the foreign students out of the cultural exchange they thought they were supposed to get.

It looks to me like the winners are Hershey, its subcontractors, and the middleman companies who bring these students over to haul boxes around a warehouse for $8 an hour minus living expenses. The losers are unemployed and underemployed local citizens, the foreign students who get shortchanged, and our foreign image after those students go back home hating America.

If businesses like Hershey want to import cheap foreign labor to exploit, let them advocate openly for a guest worker program. Then we can have a public debate and make a politically responsible decision. Let's stop doing it in the guise of a cultural exchange program.