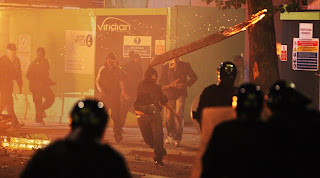 Four nights of looting and arson is enough, it seems, and tonight the police in London are supposed to take a harder line:

Scotland Yard has ordered its officers to use every available force, including possible use of plastic bullets, to stop Britain's riots as London was flooded with 16,000 officers, the biggest police presence in the capital in history.

With early reports emerging of a fourth night of trouble, involving shops broken into and torched in Greater Manchester and the West Midlands, some urban areas, notably in London, were in virtual lockdown as many businesses closed and shop windows were boarded up.

The public should expect to see "many more" rioters arrested from now on, the prime minister said. Parliament would be recalled on Thursday to debate the trouble, he added. Shortly afterwards Cameron chaired a meeting of the Cobra security committee at which it is understood he and the home secretary, Theresa May, discussed the possible use of plastic bullets, water cannon and other tactics. Following the meeting the Home Office asked the Ministry of Defence to "scope out what low-end" help the armed forces might provide.

Any decision on using plastic bullets will be up to senior police officers. If used, it would be the first time they have been fired at rioters in the UK outside Northern Ireland. It forms part of a wider reversal of tactics by Scotland Yard following criticism of its response so far. Senior police sources told the Guardian on Tuesday that for the first three nights of trouble officers in London were told to stand by, watch and wait rather than actively seek to arrest rioters and looters. But after anger from the public – who witnessed officers seemingly doing little as youths ran unchecked, burning and looting– and Cameron's intervention, those orders were abruptly changed to leave officers free to tackle troublemakers in the act.

In several parts of London local people began the initial clean-up by taking to the streets armed with brooms following appeals on social networking sites. Others were taking matters into their own hands in a different way: Amazon.co.uk's sales charts saw a sudden spike in sales for baseball bats and police-style batons.

Evidently American-style bats are popular in the UK for home defense, and they are selling like mad. This prompted an exchange of comments on the Amazon.Co.UK website, where they sell the Rucanor Aluminium Baseball Bat, between nanny-staters who want to ban the bat and defenders of the traditional right of Free-Born Englishmen to keep and bear sporting equipment.

The thread began with a call for unilateral disarmament:

call upon amazon.co.uk to ban this item temporarily as it is obviously currently abused as a cheap, quick weapon to be used in the london riots. ban it now!

but what about those buying it as protection incase rioters attack their home, mindless rioting idiots dont seem like the type to log on to amazon to get a good deal on a baseball bat online.

Amazon must show some serious maturity by 'delaying' all sales of this item until the riots are long forgotten....

TSB Note: Easy for someone in Crete to say that. Dave is about 1,600 miles away from the rioting.

Even if they are being bought by respectable home and business owners, they should be banned from sale temporarily. Vigilantism is not the answer. Get these items off the shelves, we are all scared and angry in London and need to know that measures are being taken to help us to feel safe in our Cities again.

Cracking a dude with a bat who's broken into your house trying to steal your stuff is not vigilantism.

"Usually dispatched within 4 to 6 weeks"
Hope Britannia can hold out that long...

How do we know this is for rioters.. It could be possible the UK has finally realized the superiority of American Baseball over Cricket..

Us Americans prefer shotguns for riot control, but I admire you Uk-ians for getting up close and personal with your looters.

How about a whiff of grapeshot?

I hope they can remember where they put their cannons. The present government can't even find any plastic baton rounds.

TSB: These European leaders are geniuses. They are all at the beach for 6 weeks so when Italy and France tanks they just call our own genius (Helicopter Ben) and he tells em: Do what we did in 08.. just ban short-selling the financials and they will majically rise! Problem solved! Cameron had to come back to see what the rioting was all about. Merkel will meet Sarkozy Monday at her Italian Alps campsite. What a kick that crowd! gwb

TSB: If they would just go ahead and declare martial law poor architect majors like this kid would realize that citing the US Constitution in an airport peacefully is a security risk. Civil Disobedience..or any kind of courage ... I love it! gwb
http://www2.timesdispatch.com/news/2011/jan/04/6/details-of-quotunlawful-searchquot-protest-release-ar-752838/

TSB: Mexico went post-legal 30 years ago. I wonder if this is also payback for that great ATF debacle? And besides, can you really extradite a lady? gwb
http://latino.foxnews.com/latino/news/2011/08/10/mexicos-queen-pacific-avoids-extradition/

Interesting about the Queen of the Cartel. I guess we could always offer a $5 million reward for her; that tactic seems to be working.

I'm afraid the appropriate authorities have already been paid.It's hard to beat that Mexican legal system. They just never seem to come up with enough evidence to convince a judge. Besides, she's been married to 3 or 4 cartel leaders. How many mafia wives ever were convicted?
gwb

Department of State, Assistant Secretary of State for Western Hemisphere Affairs: I think his name was Brownwood. TSB: I saw him give a speech on C-SPan today. He said we have got it wrong the past 10 years and need to quit ignoring this area.
The best part tho was a retired FS officer about 10 years older who asked him how he thought we could reduce US demand for drugs? Basically the new guy said he had no clue! Ask the drug czar! At that point I thought I was listening to
Af-Pak grand plans. Obama is toast in 12! gwb

TSB: New Book: David Crocket: The Lion of the West by Michel Wallis

I didn't know that Davy Crocket was a WHIG! The author and his wife are really funny and great. He says Crocket was used by the Whigs but he was a lot brighter than most of them.
gwb

I'll have to get that book about Crocket. He became a Whig after he broke with Andrew Jackson, and Whigs played a part in creating his image/myth after his death. E.g., The Life of Colonel David Crockett by Edward S. Elis (1884)

TSB: My view on "drugs" is evolving.
Considering the "debt problem" I think all my bright ideas about solving problems were naive. Check out my new blog post at:
http://saybadthingsaboutme.blogspot.com/2011/08/we-are-watching-great-nation-collapse.html

and see if you agree! gwb

TSB: You have a lot of years head start on my in studying history and collecting good books. Wallis' approach is to portray the myth and the reality together. He says Crocket
joined the militia to get land he wanted to settle on.. they sent him to San Antonio where he died, but really had no idea what it was all about! Quite a guy! gwb

On Crocket and the Alamo, there is pretty convincing evidence in a Mexican soldier's diary that Crocket and a few others were captured alive, but immediately tortured to death. He was a known public figure even to the Mexicans, and the writer of the diary said he was glad to see that Crocket died without pleading, all very proper and macho.

TSB: Cameron has responded to your post and the call for a "whif of grapeshot". gwb