Vladimir Putin: Is There Anything He Can't Do? 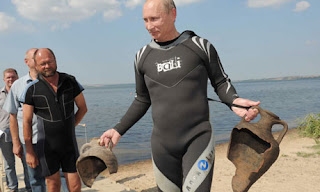 He's been at it again, staging another preposterous photo op for the sycophantic Russian official news media. This time he went diving in the Black Sea and came up with two ancient Greek ceramic urns. Really. He found them within minutes in water only two meters deep, and - hey, look - they didn't even have 1,500 years worth of crud all over them.

He's already hunted tigers, shot an arctic polar bear, fought forest fires, piloted a mini-sub to the bottom of the world's deepest lake, and done so much more, usually while shirtless and riding a horse. Which once again proves the wisdom of Mel Brooks - it's good to be the King dictator.

I wonder ... if Putin and Kim Jung Il even played golf together, would there be numbers high enough for their caddies to record all the holes-in-one they'd make?

Putin's act might finally be getting a little stale for some of his audience, as the BBC reports, but I don't think it will be going away.

How can he keep it fresh? I think the solution is obvious. Putin should grow a beard and take over those Dos Equis commercials, thereby making him officially The Most Interesting Man In The World.

Newt is trying to get the Dos Equus gig.. but his wife is insisting on being in every shot! gwb

In Today's Army Powerful Rats Walk Even When Good Guys Talk.. and then the Base Commander gets promoted!

http://seattletimes.nwsource.com/html/localnews/2015904336_madigan14.html
Army whistle-blower fights to clear name Madigan Army Medical Center surgeon Michael Eisenhauer says his military career foundered as he exposed cozy dealings between an Army doctor and a medical-equipment manufacturer. His whistle-blowing helped lead to the criminal conviction of one doctor; but Eisenhauer is still fighting to clear his own name. gwb

Cuba in the Crosshairs
A Near Half-Century of Terror
By Noam Chomsky
TSB: Recently declassified docs on "OPERATION MONGOOSE" in this Tomdispatch (8/15)portray US terrorism visited on Cuba under Ike,
JFK, NIXON that we haven't heard of before. No wonder we still won't lift the embargo! We would have to "FESS PARKER UP!" gwb

TSB: It is getting tough in Karachi
where electricity has been out 24-36 hrs in most areas on a holiday. This is from Dawn 8/15.

The KESC has closed all operations in Godhra till the arrest of the killers of linesman Qamar Alam, a member of a repair team in the area. LINE REPAIRMAN:THE MOST DANGEROUS JOB IN KARACHI! gwb

According to a KESC media release issued on Sunday, Mr Alam was busy repairing a local fault in Makkah Colony, Godhra, when “members of a religio-political party fired gunshots at him”, killing him on the spot, it added.

So Noam Chomsky took the occasion of Fidel's 85th birthday to bemoan our decades-old aggression toward Cuba? Well, goes to show you how long the Gringos hold a grudge; bring the world to the brink of nuclear war just one time, and they're still on your back about it years later.

Karachi? All things considered, I think it's the worst place I've ever been. It's not the most primitive (by any means), nor the most unhealthy, nor the most chaotic, and not even the most dangerous (it's #2 behind Peshawar). But it scores so high in all categories that it's the clear overall winner for Worst Place On Earth.

What's next? The medal of freedom? gwb

Maybe the ATF Omertà Award. All three are being brought to DC, where they can be kept under thumb more easily.

This promotion was particularly choice:

"McMahon [formerly the western regional director] was promoted Sunday to deputy assistant director of the ATF's Office of Professional Responsibility and Security Operations — the division that investigates misconduct by employees and other problems."

TSB: I agree completely. You have to reward the really big screw ups because these guys have the goods on the higher ups who knew about it.
My favorite was the medal of freedom for Bush' CIA Director after his "Slam Dunk" declaration on Iraqi WMD.
People don't realize that a guy like McMahon of average intelligence can rise to the top of a government agency and have no idea what he's doing or any moral compass. gwb

The Pakistani police have "no clue" in the Karachi kidnapping! That looks to me like some serious payback for the Bin Ladin mission. If you look at the corporate website they do some really elaborate development programs in a lot of countries. gwb

A clueless amoral guy of only average intelligence rising to the top of a USG agency? I've never heard of such a thing.