Where Is The Nanny State When Feral Children Run Wild? 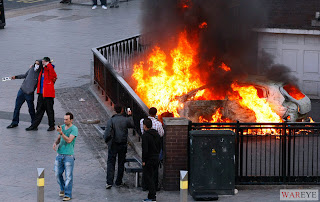 The starkest and grimmest commentary I've seen on the English rioters comes from the historian, editor, and journalist Max Hastings. How liberal dogma spawned a generation of brutalized youths:

A few weeks after the U.S. city of Detroit was ravaged by 1967 race riots in which 43 people died, I was shown around the wrecked areas by a black reporter named Joe Strickland.

He said: ‘Don’t you believe all that stuff people here are giving media folk about how sorry they are about what happened. When they talk to each other, they say: “It was a great fire, man!” ’

If you live a normal life of absolute futility, which we can assume most of this week’s rioters do, excitement of any kind is welcome. The people who wrecked swathes of property, burned vehicles and terrorised communities have no moral compass to make them susceptible to guilt or shame.

Most have no jobs to go to or exams they might pass. They know no family role models, for most live in homes in which the father is unemployed, or from which he has decamped.

They are illiterate and innumerate, beyond maybe some dexterity with computer games and BlackBerries.

They are essentially wild beasts. I use that phrase advisedly, because it seems appropriate to young people bereft of the discipline that might make them employable; of the conscience that distinguishes between right and wrong.

They respond only to instinctive animal impulses — to eat and drink, have sex, seize or destroy the accessible property of others.

Their behaviour on the streets resembled that of the polar bear which attacked a Norwegian tourist camp last week. They were doing what came naturally and, unlike the bear, no one even shot them for it.

A former London police chief spoke a few years ago about the ‘feral children’ on his patch — another way of describing the same reality.

The depressing truth is that at the bottom of our society is a layer of young people with no skills, education, values or aspirations. They do not have what most of us would call ‘lives’: they simply exist.

Nobody has ever dared suggest to them that they need feel any allegiance to anything, least of all Britain or their community. They do not watch royal weddings or notice Test matches or take pride in being Londoners or Scousers or Brummies.

Not only do they know nothing of Britain’s past, they care nothing for its present.

They have their being only in video games and street-fights, casual drug use and crime, sometimes petty, sometimes serious.

The notions of doing a nine-to-five job, marrying and sticking with a wife and kids, taking up DIY or learning to read properly, are beyond their imaginations.

Last week, I met a charity worker who is trying to help a teenage girl in East London to get a life for herself. There is a difficulty, however: ‘Her mother wants her to go on the game.’ [English-to-American translation note: to 'go on the game' is to become a prostitute] My friend explained: ‘It’s the money, you know.’

When social surveys speak of ‘deprivation’ and ‘poverty’, this is entirely relative. Meanwhile, sanctions for wrongdoing have largely vanished.

When Work and Pensions Secretary Iain Duncan Smith recently urged employers to take on more British workers and fewer migrants, he was greeted with a hoarse laugh.

Every firm in the land knows that an East European — for instance — will, first, bother to turn up; second, work harder; and third, be better-educated than his or her British counterpart.Who do we blame for this state of affairs?

Of course it is true that few have jobs, learn anything useful at school, live in decent homes, eat meals at regular hours or feel loyalty to anything beyond their local gang.

This is not, however, because they are victims of mistreatment or neglect.

It is because it is fantastically hard to help such people, young or old, without imposing a measure of compulsion which modern society finds unacceptable. These kids are what they are because nobody makes them be anything different or better.

A key factor in delinquency is lack of effective sanctions to deter it. From an early stage, feral children discover that they can bully fellow pupils at school, shout abuse at people in the streets, urinate outside pubs, hurl litter from car windows, play car radios at deafening volumes, and, indeed, commit casual assaults with only a negligible prospect of facing rebuke, far less retribution.

John Stuart Mill wrote in his great 1859 essay On Liberty: ‘The liberty of the individual must be thus far limited; he must not make himself a nuisance to other people.’

Yet every day up and down the land, this vital principle of civilised societies is breached with impunity.

Anyone who reproaches a child, far less an adult, for discarding rubbish, making a racket, committing vandalism or driving unsociably will receive in return a torrent of obscenities, if not violence.

The police, in recent years, have developed a reputation for ignoring yobbery [English-to-American translation note: 'yobbery' is hooliganism] and bullying, or even for taking the yobs’ side against complainants.

‘The problem,’ said Bill Pitt, the former head of Manchester’s Nuisance Strategy Unit, ‘is that the law appears to be there to protect the rights of the perpetrator, and does not support the victim.’

Police regularly arrest householders who are deemed to have taken ‘disproportionate’ action to protect themselves and their property from burglars or intruders. The message goes out that criminals have little to fear from ‘the feds’.

A teacher, Francis Gilbert, wrote five years ago in his book Yob Nation: ‘The public feels it no longer has the right to interfere.’

So there we have it: a large, amoral, brutalised sub-culture of young British people who lack education because they have no will to learn, and skills which might make them employable. They are too idle to accept work waitressing or doing domestic labour, which is why almost all such jobs are filled by immigrants.

They have no code of values to dissuade them from behaving anti-socially or, indeed, criminally, and small chance of being punished if they do so.

They have no sense of responsibility for themselves, far less towards others, and look to no future beyond the next meal, sexual encounter or TV football game.

They are an absolute deadweight upon society, because they contribute nothing yet cost the taxpayer billions. Liberal opinion holds they are victims, because society has failed to provide them with opportunities to develop their potential.

Most of us would say this is nonsense. Rather, they are victims of a perverted social ethos, which elevates personal freedom to an absolute, and denies the underclass the discipline — tough love — which alone might enable some of its members to escape from the swamp of dependency in which they live.

Only education — together with politicians, judges, policemen and teachers with the courage to force feral humans to obey rules the rest of us have accepted all our lives — can provide a way forward and a way out for these people.

They are products of a culture which gives them so much unconditionally that they are let off learning how to become human beings. My dogs are better behaved and subscribe to a higher code of values than the young rioters of Tottenham, Hackney, Clapham and Birmingham.

Unless or until those who run Britain introduce incentives for decency and impose penalties for bestiality which are today entirely lacking, there will never be a shortage of young rioters and looters such as those of the past four nights, for whom their monstrous excesses were ‘a great fire, man’.

That's stark, all right. Even dismal. But it rings true to me. Who has not seen those feral children of all ages, or experienced the public's unwillingness to interfere with blatantly antisocial behavior?

It's the fault of the nannies (government agencies) who aren't doing their jobs, and therefore ultimately of the careless people (voters) who left them in charge.

Great Post TSB! The grandchildren of 70's welfare moms have no chance of imagining anything beyond the culture
they were born into. gwb

FRIDAY, AUGUST 12, 2011
Congress Wants a U.S. Embassy in Every Caribbean Country? Um, Because Why The Heck Not?

TSB: Could you help Diplopundit with a
design for these new embassies? How about something based on a beach umbrella? We could fund them from the proceeds when we sell that one in Damascus. gwb

Oh, I fully endorse having a one-man consular shop on each and every island in the Lesser Antilles, no matter how small and insignificant. I used to visit some of those specks in the sea when I lived in Puerto Rico (last of the Greater Antilles islands) so I know they can be pleasant and relaxing.

The situation calls for a series of site selection visits starting around November. I'll pack my shorts and flip-flops.

Bravo TSB! On a dangerous mission like that would you go in by air or submarine?