Your Tax Dollars At Work In Waziristan 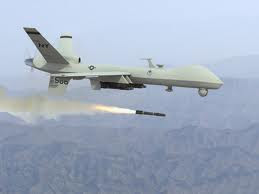 Al-Qaeda's new Number 2 leader, Atiyah Abd al-Rahman, has been struck off the AQ organization chart as the result of a drone strike in Northwest Pakistan, the WaPo reports.

Rahman was seen as a high-priority target in the CIA drone campaign at a time when U.S. officials have described al-Qaeda as near collapse and have said that a small set of successive blows could all but extinguish the organization behind the Sept. 11, 2001, attacks.

Last month, Defense Secretary Leon E. Panetta said a strategic defeat of al-Qaeda was “within reach” and called for continued efforts to hammer the group’s weakened leadership with a series of attacks.

So, we've now killed AQ's Number 1, and its Number 2, and - of course - a great many of its Number 3s. When does the organization collapse?

Maybe it doesn't collapse. Michael Scheuer, former head of the CIA's bin Laden unit, thinks AQ has already been institutionalized to such a degree that it will survive leadership changes. See his essay on just that question, which was published in The National Interest three days ago:

Being a highly talented combination of seventh-century believer and twenty-first-century CEO, bin Laden built, in al-Qaeda, an absolutely unique Muslim organization: multiethnic, multilingual, organizationally sound and resilient, religiously tolerant and militarily effective. We will see in the next few years if bin Laden was the indispensable glue that kept al-Qaeda together or if his skill, his leadership and its nearly twenty-five years of being institutionalized as an organization created a survivable entity ... My own bet is that al-Qaeda will survive, as it did after near economic ruin in Sudan (1994–96); after the pounding it took from the U.S.-NATO-Pakistan coalition (2001–02); and after the U.S. military helpfully killed Abu Musab al-Zarqawi, al-Qaeda’s chief in Iraq (2006), whose indiscriminate targeting of Muslims almost pushed al-Qaeda to the brink of defeat.

There are plenty more AQ leaders where al-Rahman came from. And, really, what are a few drone strikes compared to all that AQ has already survived?

YOUR TAX DOLLARS IN FLIGHT TSB! I'm guessing Qadaffi took flight in the one Gulfstream G-3 in the Zimbabwae Air Force! My God they have a lot of airplanes! What ever happened to that no fly zone? gwb

TSB: Big Sis sure had a great rollout
of her FEMA CAMP project this weekend, especially in New York and New Jersey. Gov. Christie was all over it while Gov Cuomo was silent. But where is the coverage of the internees? Are they happy with the food and water? Do they want to go home? Kind of a blackout on that. I bet Von Christie will be FEMA Dir. in 2013. That guy knows how to order people around! gwb

I think some High Schools on the Jersey shore are being used as shelters, which is normal. But FEMA Camps are kind of out there with the Chem Trails and black helicopters.

Christie definitely looked like he was in his element when he was ordering everybody in Atlantic City off the beach and out of town. FEMA would be too small a job for him; DHS Director at the very, very, least.

Good Point! How about VP with Perry? Or even Atty General? He is just the guy to clean up 50 years of commie, I mean democrat corruption. Did you see this guy in NJ? He even has $630,000
in excess campaign contributions he figures should be used to pay his lawyers in this loong corruption case.